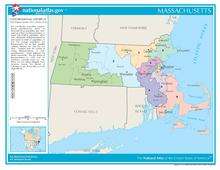 Massachusetts's sixteenth congressional district is an obsolete district. It was also for a short time in the early 19th century a Massachusetts District of Maine. It was eliminated in 1933 after the 1930 Census. Its last location was in eastern Massachusetts at Cape Cod. Its last Congressman was Charles L. Gifford, who was redistricted into the fifteenth district.