Not to be confused with Matilda of Flanders, Duchess of Brabant.

Matilda of Flanders (French: Mathilde de Flandre; Dutch: Mathilda van Vlaanderen) (c. 1031 – 2 November 1083) was the wife of William the Conqueror and, as such, Queen of England. She bore William nine or ten children who survived to adulthood, including two kings, William II and Henry I.

As a niece and granddaughter of kings of France, Matilda was of grander birth than William, who was illegitimate, and, according to some suspiciously romantic tales, she initially refused his proposal on this account. Her descent from the Anglo-Saxon royal House of Wessex was also to become a useful card. Like many royal marriages of the period, it breached the rules of consanguinity, then at their most restrictive (to seven generations or degrees of relatedness); Matilda and William were third-cousins, once removed. She was about 20 when they married in 1051/2; William was some three years older, and had been Duke of Normandy since he was about eight.

The marriage appears to have been successful, and William is not recorded to have had any bastards. Matilda was about 35, and had already produced most of her children, when William embarked on the Norman conquest of England, sailing in his flagship Mora, which Matilda had given him. She governed the Duchy of Normandy in his absence, joining him in England only after more than a year, and subsequently returning to Normandy, where she spent most of the remainder of her life, while William was mostly in his new kingdom. She was about 51 when she died in Normandy in 1083.

Apart from governing Normandy and supporting her brother's interests in Flanders, Matilda took a close interest in the education of her children, who were unusually well educated for contemporary royalty. The boys were tutored by the Italian Lanfranc, who was made Archbishop of Canterbury in 1070, while the girls learned Latin in Sainte-Trinité Abbey in Caen, founded by William and Matilda as part of the papal dispensation allowing their marriage.

Matilda, or Maud, was the daughter of Baldwin V, Count of Flanders and Adèle of France, herself daughter of Robert II of France.[1]

According to legend, when Duke William II of Normandy (later known as William the Conqueror) sent his representative to ask for Matilda's hand in marriage, she told the representative that she was far too high-born to consider marrying a bastard.[lower-alpha 1] After hearing this response, William rode from Normandy to Bruges, found Matilda on her way to church, dragged her off her horse by her long braids, threw her down in the street in front of her flabbergasted attendants and rode off.

Another version of the story states that William rode to Matilda's father's house in Lille, threw her to the ground in her room (again, by her braids) and hit her (or violently battered her) before leaving. Naturally, Baldwin took offense at this; but, before they could draw swords, Matilda settled the matter[2] by refusing to marry anyone but William;[3] even a papal ban by Pope Leo IX at the Council of Reims on the grounds of consanguinity did not dissuade her. William and Matilda were married after a delay in c. 1051-2.[4] A papal dispensation was finally awarded in 1059 by Pope Nicholas II.[5] Lanfranc, at the time prior of Bec Abbey, negotiated the arrangement in Rome and it came only after William and Matilda agreed to found two churches as penance.[6]

There were rumours that Matilda had been in love variously with the English ambassador to Flanders and with the great Saxon thegn Brictric, son of Algar, who (according to the account by the Continuator of Wace and others[7]) in his youth declined her advances. Whatever the truth of the matter, years later when she was acting as regent for her husband William in England, she is said to have used her authority to confiscate Brictric's lands and throw him into prison, where he died.[8]

When William was preparing to invade England, Matilda outfitted a ship, the Mora, out of her own funds and gave it to him.[9] Additionally, William entrusted Normandy to his wife during his absence. Matilda successfully guided the duchy through this period in the name of her fourteen-year-old son; no major uprisings or unrest occurred.[10]

Even after William conquered England and became its king, it took her more than a year to visit the kingdom.[11] Despite having been crowned queen, she spent most of her time in Normandy, governing the duchy, supporting her brother's interests in Flanders, and sponsoring ecclesiastic houses there. Only one of her children was born in England; Henry was born in Yorkshire when Matilda accompanied her husband in the Harrying of the North.[12] 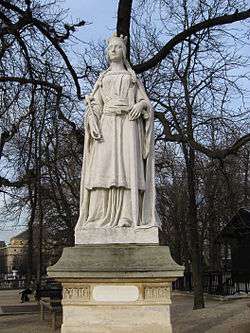 Statue of Matilda of Flanders, one of the twenty Reines de France et Femmes illustres in the Jardin du Luxembourg, Paris, by Carle Elshoecht (1850) 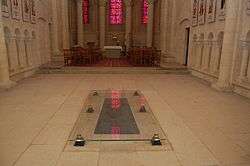 Tomb of Matilda of Flanders at Caen

Matilda was crowned queen on 11 May 1068 in Westminster during the feast of Pentecost, in a ceremony presided over by the archbishop of York. Three new phrases were incorporated to cement the importance of English consorts, stating that the Queen was divinely placed by God, shares in royal power, and blesses her people by her power and virtue.[13][14]

For many years it was thought that she had some involvement in the creation of the Bayeux Tapestry (commonly called La Tapisserie de la Reine Mathilde in French), but historians no longer believe that; it seems to have been commissioned by William's half-brother Odo, Bishop of Bayeux, and made by English artists in Kent.[15]

Matilda bore William nine or ten children. He was believed to have been faithful to her and never produced a child outside their marriage. Despite her royal duties, Matilda was deeply invested in her children's well-being. All were known for being remarkably educated. Her daughters were educated and taught to read Latin at Sainte-Trinité in Caen founded by Matilda and William in response to the recognition of their marriage.[16] For her sons, she secured Lanfranc, Archbishop of Canterbury of whom she was an ardent supporter. Both she and William approved of the Archbishop's desire to revitalize the Church.[17]

She stood as godmother for Matilda of Scotland, who would become Queen of England after marrying Matilda's son Henry I. During the christening, the baby pulled Queen Matilda's headdress down on top of herself, which was seen as an omen that the younger Matilda would be queen some day as well.[18]

Matilda fell ill during the summer of 1083 and died in November 1083. Her husband was present for her final confession.[19] William died four years later in 1087.

Contrary to the common belief that she was buried at St. Stephen's, also called l'Abbaye-aux-Hommes in Caen, Normandy, where William was eventually buried, she is entombed in Caen at l'Abbaye aux Dames, which is the community of Sainte-Trinité. Of particular interest is the 11th-century slab, a sleek black stone decorated with her epitaph, marking her grave at the rear of the church. In contrast, the grave marker for William's tomb was replaced as recently as the beginning of the 19th century.

Over time Matilda's tomb was desecrated and her original coffin destroyed. Her remains were placed in a sealed box and reburied under the original black slab.[20] In 1959 Matilda's incomplete skeleton was examined and her femur and tibia were measured to determine her height using anthropometric methods. Her height was 5 feet (1.52m), a normal height for the time.[21] However, the result of this examination has been misreported as being 4 feet 2 inches (1.27m)[22] and as a result there is a myth that she was extremely small.

Matilda and William had four sons and at least five daughters.[23] The birth order of the boys is clear, but no source gives the relative order of birth of the daughters.[23]

There is no evidence of any illegitimate children born to William.[30]

William was furious when he discovered she sent large sums of money to their exiled son Robert.[31] She effected a truce between them at Easter 1080.