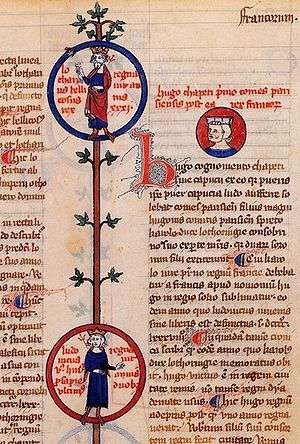 The degree of relative consanguinity can be illustrated with a consanguinity table, in which each level of lineal consanguinity (i.e., generation or meiosis) appears as a row, and individuals with a collaterally consanguineous relationship share the same row.[1] The Knot System is a numerical notation that defines consanguinity.[2] 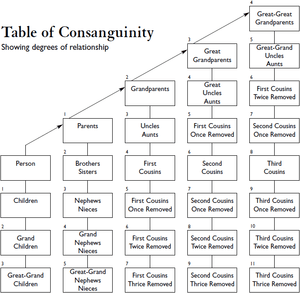 The number in each box indicates the degree of relationship
Further information: Prohibited degree of kinship

Issues of consanguinity arise in several aspects of the law.

Laws prohibiting incest govern the degree of kinship within which marriage or sexual intercourse is permitted. These are almost universally prohibited within the second degree of consanguinity. Some jurisdictions forbid marriage between first cousins, while others do not. Marriage with aunts and uncles (avunculate marriage) is legal in several countries.

Consanguinity is also relevant to inheritance, particularly with regard to intestate succession. In general, the law favors inheritance by persons closely related to the deceased.

Some jurisdictions bar citizens from service on a jury on the basis of consanguinity with persons involved in the case.[3]

In many countries, laws prohibiting nepotism bar employment of, or certain kinds of contracts with, the near relations of public officers or employees.

Under Roman civil law, which early canon law of the Catholic Church followed, couples were forbidden to marry if they were within four degrees of consanguinity.[4] In the ninth century the church raised the number of prohibited degrees to seven and changed the method by which they were calculated.[5] Eventually the nobility became too interrelated to marry as the pool of non-related prospective spouses became smaller. It was either defy the church's position or look elsewhere for eligible marriage candidates.[6] In 1215 the Fourth Lateran Council made what they believed was a necessary change to canon law reducing the number of prohibited degrees of consanguinity from seven back to four.[7][8] The method of calculating prohibited degrees was changed also.[9] Instead of the former practice of counting up to the common ancestor then down to the proposed spouse, the new law computed consanguinity by counting back to the common ancestor.[9] In the Roman Catholic Church, unknowingly marrying a closely consanguineous blood relative was grounds for a declaration of nullity, but during the eleventh and twelfth centuries dispensations were granted with increasing frequency due to the thousands of persons encompassed in the prohibition at seven degrees and the hardships this posed for finding potential spouses.[10]

After 1215 the general rule was that while fourth cousins could marry without dispensation, generally the need for dispensations was greatly reduced.[10] In fourteenth century England, for example, papal dispensations for annulments due to consanguinity (and affinity) were relatively few.[11]

Among the Christian Habesha highlanders of Ethiopia and Eritrea (the predominantly orthodox Christian Amhara and Tigray-Tigrinya), it is a tradition to be able to recount one's paternal ancestors at least seven generations away starting from early childhood, because "those with a common patrilineal ancestor less than seven generations away are considered 'brother and sister' and may not marry." The rule is less strict on the mother's side, where the limit is about four generations back, but still determined patrilinearly. This rule does not apply to Muslims or other ethnic groups.[12]

IslamThe category includes those one is forbidden to marry due to relationship of blood as well as some who are forbidden due to marital relations. "And do not marry women whom your fathers married except what has already passed. It was indeed obscene, hateful and an evil way. (22) Forbidden to you in marriage are: your mothers, your daughters, your sisters, your father's sisters, your mother's sisters, your brother's sisters, your sister's daughters, your wet nurse, your 'sisters' by nursing, your wives mothers, your step daughters under your guardianship born of your wives with whom you have consummated - if you did not consummate then there is no sin upon you, the wives of your blood sons, two sisters at the same time, except for that which has already passed. Verily, Allah is Forgiving, Merciful. (23) And those already married except those whom your right hand possesses (through capture). Allah's ordinance upon you. And allowed for you are all besides these if you seek them with your property seeking chastity not fornication..." [Noble Quran 4:22-24]

Ayurveda clearly states that marriage within the Gotra is a consanguineous marriage which can lead to many gestational and genetic problems in the fetus. So it has become a common practice in the Hindu households during pre-marriage discussions to ask the couples' Gotra. Couples of the same Gotra are advised not to marry. The advisers of this system say that this practice definitely helps in reducing the gestational problems and ensures a healthy progeny.

A simplistic depiction of genetic relatedness after n generations as a 2–n progression. 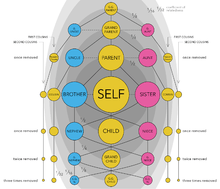 Diagram of common family relationships, where the area of each colored circle is scaled according to the coefficient of relatedness. All relatives of the same relatedness are included together in one of the gray ellipses. Legal degrees of relationship can be found by counting the number of solid-line connections between the self and a relative.

In genetic terms, consanguinity derives from the reduction in variation due to meiosis that occurs because of the smaller number of near ancestors. Since all humans share between 99.6% and 99.9% of their genome,[14] consanguinity only affects a very small part of the sequence. If two siblings have a child, then that child only has two rather than the normal four grandparents. In these circumstances the probability that the child inherits two copies of a harmful recessive gene (allele) rather than one (which would not have immediate effects) is much increased.

Conventionally, genetic consanguinity is expressed as defined by Wright[15] with the coefficient of relationship r, where r is defined as the fraction of homozygous due to the consanguinity under discussion. Thus, a parent and child pair has a value of r=0.5, siblings have a value of r=0.5, a parent's sibling has r=0.25, and first cousins have r=0.125. These are now often expressed in terms of a percentage of shared DNA.

As a working definition, unions contracted between persons biologically related as second cousins or closer (r ≥ 0.03125) are categorized as consanguineous. This arbitrary limit has been chosen because the genetic influence in marriages between couples related to a lesser degree would usually be expected to differ only slightly from that observed in the general population. Globally it is estimated that at least 8.5% of children have consanguineous parents.[16]

It is common to distinguish first-degree cousins, second-degree cousins, and often also third-degree cousins. Since comparatively few people can trace their full family tree for more than four generations, the identity of fourth-degree cousins often cannot be established. Also, at a genetic level, half-fourth cousins typically do not exhibit greater genetic similarity with one another than with any other individual from the same population.[17]

Double first cousins are descended from two pairs of siblings, and have the same genetic similarity as half-siblings.

Globally, the most common form of consanguineous union contracted is between first cousins, in which the spouses share 1/8 of their genes inherited from a common ancestor, and so their progeny are homozygous (or more correctly autozygous) at 1/16 of all loci (r = 0.0625).[18] Due to variation in geographical and ethnic background and the loci chosen to genotype there is some 2.4% variation expected. In practice the technical factors involved are the design of the SNP genotyping platform was used (e.g. which SNP array or sequencing method) and which software cut-offs were applied.[19]

Historically, some European nobles cited a close degree of consanguinity when they required convenient grounds for divorce, especially in contexts where religious doctrine forbade the voluntary dissolution of an unhappy or childless marriage.[20] Conversely, the consanguinity law of succession requires the next monarch to be of the same blood of the previous one; allowing, for example, illegitimate children to inherit.

Among modern Arabs the practice of marrying of relatives is a common feature. In the Arab world today between 40% and 50% of all marriages are consanguineous or between close family members, though these figures may vary among Arab nations.[21][22]

It is estimated that 55% of marriages between Pakistani Muslim immigrants in the United Kingdom are between first cousins,[26] where preferential patrilateral parallel cousin marriage (where a boy marries the daughter of his father's brother) is often favored.

The list of forbidden marriage partners, as read in the Qur'an, Surah 4:23, does not include first cousins.[27] Mohammed himself married Zaynab, his first cousin.[28]

The phenomenon of inbreeding, or endogamy, increases the level of homozygotes for autosomal genetic disorders and generally leads to a decreased biological fitness of a population known as inbreeding depression, a major objective in clinical studies.[29] The offspring of consanguineous relationships are at greater risk of certain genetic disorders. Autosomal recessive disorders occur in individuals who are homozygous for a particular recessive gene mutation.[30] This means that they carry two copies (alleles) of the same gene.[30] Except in certain rare circumstances (new mutations or uniparental disomy) both parents of an individual with such a disorder will be carriers of the gene.[30] Such carriers are not affected and will not display any signs that they are carriers, and so may be unaware that they carry the mutated gene. As relatives share a proportion of their genes, it is much more likely that related parents will be carriers of an autosomal recessive gene, and therefore their children are at a higher risk of an autosomal recessive disorder.[31] The extent to which the risk increases depends on the degree of genetic relationship between the parents; so the risk is greater in mating relationships where the parents are close relatives, but for relationships between more distant relatives, such as second cousins, the risk is lower (although still greater than the general population).[32]

The low genetic heterozygosity associated with increased consanguinity in a population (identified by microsatellite markers) increases its susceptibility to infectious pathogens such as tuberculosis and hepatitis.[33]

A notable historical example of the detrimental effects of consanguinous marriages is the now-extinct House of Habsburg.