Maximilian II (11 July 1662 – 26 February 1726), also known as Max Emanuel or Maximilian Emanuel,[1] was a Wittelsbach ruler of Bavaria and a Kurfürst of the Holy Roman Empire. He was also the last governor of the Spanish Netherlands and duke of Luxembourg. An able soldier, his ambition led to conflicts that limited his ultimate dynastic achievements.

He was born in Munich to Ferdinand Maria, Elector of Bavaria and Henriette Adelaide of Savoy (d.1676). His maternal grandparents were Victor Amadeus I of Savoy and Christine Marie of France, daughter of King Henri IV.

War against the Ottoman Empire

Maximilian inherited the elector's mantle while still a minor in 1679 and remained under his uncle Maximilian Philipp's regency until 1680. By 1683 he was already embarked on a military career, fighting in the defense of Vienna against the attempt of the Ottoman Empire to extend their possessions further into Europe. He returned to court for long enough to marry Maria Antonia, daughter of Leopold I, Holy Roman Emperor and Margaret Theresa of Spain, on July 15, 1685 in Vienna, Austria. This marriage was very unhappy since the couple disliked each other, but it was successful in producing a desired heir for both Bavaria and the Spanish monarchy. Maximilian Emanuel's fame was assured when, in 1688, he led the capture of Belgrade from the Turks, with the full support of Serbian insurgents under the command of Jovan Monasterlija.

Governor of the Spanish Netherlands

In the War of the Grand Alliance he again fought on the Habsburgs' side, protected the Rhine frontier, and, being the Emperor's son-in-law and the husband of the King of Spain's niece, was appointed governor of the Spanish Netherlands in late 1691.[2]

His Netherlands adventure catalyzed Maximilian Emanuel's dynastic ambitions. One year after his appointment as governor, Maria Antonia died in Vienna, having given birth to a son, Joseph Ferdinand, who was appointed heir to the Spanish monarchy, but died before acceding thereto in 1699. An alternative avenue for Maximilian Emanuel's ambition was offered by his marriage on 12 January 1694 to Theresa Kunegunda Sobieska, the death of whose father, the elected King of Poland John III Sobieski, two years later, offered a potential avenue of influence in Polish affairs.

However, he concentrated his interests in Western Europe, making his sons by Theresa Kunegunda Sobieska, Charles Albert and Clemens August, the principal beneficiaries of his ambitions.

The unsuccessful siege and bombardment of Brussels in 1695 during the Nine Years' War by French troops and the resulting fire during Max Emanuel's rule were together the most destructive event in the entire history of Brussels.

War of the Spanish Succession 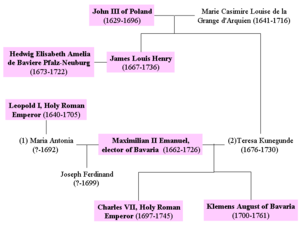 Maximilian Emanuel was one of many who sought to claim the Spanish throne pending the death of Charles II of Spain.[2] In 1699 Maximilian Emanuel's first son, Joseph Ferdinand, died. By the outbreak of the War of the Spanish Succession in 1701, he had developed a plan for the Wittelsbachs to supplant the Habsburgs as Holy Roman Emperors. Allying himself with the French against the Habsburgs, his campaign against Tyrol in 1703 did not have success and his plans were then frustrated by the disastrous defeat at the Battle of Blenheim in 1704.

In 1704–05, following the evacuation of the Bavarian court to the Spanish Netherlands after the defeat at the Battle of Blenheim, Max Emanuel's consort apparently was in charge of the government in the Stewardship of Munich of the Electorate of Bavaria as Regent Princess. However, when Theresa Kunegunda had found love letters of the Countess of Arco, a mistress of Max Emanuel, she left Munich to see her mother in Venice. The army would not allow her to return. In the ensuing evacuation of his court to the Netherlands, Maximilian Emanuel's family became separated and his sons were held prisoners for several years in Austria, Klemens August being brought up by Jesuits. Bavaria was partitioned between Austria and Johann Wilhelm, Elector Palatine, leading to bloody uprisings of the people against the Austrian imperial troops.

Maximilian Emanuel was again forced to flee the Netherlands after the Battle of Ramillies on 23 May 1706 and found refuge at the French court in Versailles where his late sister Maria Anna (1660–1690) had been the wife of the Grand Dauphin. In 1712* Luxembourg and Namur were ceded to Maximilian Emanuel by his French allies. The war was finally ended in 1713 in the Treaty of Utrecht which restored Maximilian Emanuel. Only in 1715 was the family re-united in Munich. 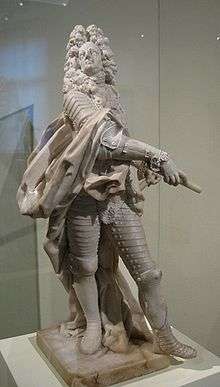 Back in Bavaria, Maximilian Emanuel focused on architecture projects to balance the failure of his political ambitions. It was bitter for him to witness the royal elevation of the German princes Augustus II the Strong (1697), Frederick I of Prussia (1701) and George I of Hanover (1714) while his own political dreams could not be realized.

Maximilian Emanuel then supported the new wars of the Habsburg against the Turks with Bavarian auxiliary forces (1717).

In 1724 he created a union of all lines of the Wittelsbach dynasty to increase the influence of his house. The Wittelsbach prince-electors Max Emanuel, his son Clemens August of Cologne, Charles III Philip, Elector Palatine and Franz Ludwig of Trier had at that time four votes at their disposal for the next imperial election. The crown of the Holy Roman Empire was sought for either Max Emanuel or his son Charles Albert. Already in 1722 Charles Albert had been married to the Habsburg princess Maria Amalia of Austria.

In 1726, Max Emanuel died of a stroke. He is buried in the crypt of the Theatinerkirche in Munich.

During his entire reign Maximilian II Emanuel patronized the arts. As Governor of the Spanish Netherlands he acquired numerous Dutch and Flemish paintings for the Wittelsbach collection.

The first half of Max Emanuel's reign was still dominated by his parent's Italian court artists, like Enrico Zuccalli and Giovanni Antonio Viscardi. With the appointment of Joseph Effner serving as chief architect of the court and the young François de Cuvilliés as his assistant, the French influence significantly increased and Max Emanuel's return in 1715 marked the origin of the era of Bavarian rococo.

The Nymphenburg Palace was enlarged, the Dachau Palace redesigned and the new Schleissheim Palace was constructed during his reign. These palaces were connected with a network of canals as Max Emanuel became acquainted with in the Netherlands. The Fürstenried Palace was built for Max Emanuel as a hunting lodge.

He had an illegitimate child with his French mistress Agnes Françoise Louchier;