William II of the Netherlands

William II was the son of William I and Wilhelmine of Prussia. When his father, who up to that time ruled as sovereign prince, proclaimed himself king in 1815, he became Prince of Orange as heir apparent of the Kingdom of the Netherlands. With the abdication of his father on 7 October 1840, William II became king. During his reign, the Netherlands became a parliamentary democracy with the new constitution of 1848.

William II was married to Anna Pavlovna of Russia. They had four sons and one daughter. William II died on 17 March 1849 and was succeeded by his son William III.

Willem Frederik George Lodewijk was born on 6 December 1792 in The Hague. He was the eldest son of King William I of the Netherlands and Wilhelmine of Prussia. His maternal grandparents were King Frederick William II of Prussia and his second wife Frederika Louisa of Hesse-Darmstadt.

When William was two, he and his family fled to England after allied British-Hanoverian troops left the Republic and entering French troops defeated the army of the United Provinces, claiming liberation by joining the anti-Orangist Patriots. William spent his youth in Berlin at the Prussian court, where he followed a military education and served in the Prussian Army. After this, he studied at the University of Oxford and had a splendid military career close to Wellington. William II had a string of relationships with both men and women. The homosexual relationships that William II had as crown prince and as king were reported by journalist Eillert Meeter. The king surrounded himself with male servants whom he could not dismiss because of his 'abominable motive' for hiring them in the first place.[1] 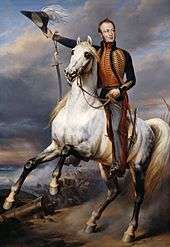 He entered the British Army, and in 1811, as a 19 year old aide-de-camp in the headquarters of Arthur Wellesley, 1st Duke of Wellington, was allowed to observe several of Wellington's campaigns of the Peninsular War. Though not yet 20, the young prince, according to the customs of the time, was made lieutenant colonel on 11 June 1811[2] and Colonel on 21 October that year.[3] On 8 September 1812 he was made an aide-de-camp to the Prince Regent[4] and on 14 December 1813 promoted to major-general.[5] His courage and good nature made him very popular with the British, who nicknamed him "Slender Billy." He returned to the Netherlands in 1813 when his father became sovereign prince, and in May 1814 succeeded Sir Thomas Graham as the highest-ranking officer of the British forces stationed there.[6]

On 8 July 1814, he was promoted to lieutenant-general in the British Army,[7] and on 25 July to general.[8] As such, he was senior officer of the Allied army in the Low Countries when Napoleon I of France escaped from Elba in 1815. He relinquished command on the arrival of the Duke of Wellington, and, though this was his first real battle, fought with the title of "General" I Allied Corps at the Battle of Quatre Bras (16 June 1815) and the Battle of Waterloo (18 June 1815), where he was wounded.[9] He was 23. As a sign of gratitude for what the Dutch throne styled "his" victory at Waterloo, William was offered Soestdijk Palace by the Dutch people.[10][11]

The British army lieutenant and military historian William Siborne blamed many casualties during the Waterloo Campaign on William's inexperience, incompetence, desperation to save face, and grossly-inflated opinion of his own military abilities.[12] In response, Siborne was accused by Lieutenant-General Willem Jan Knoop of many inaccuracies and contradictions.[13] An inspection of the archives of Siborne by General Francois de Bas in 1897 confirmed the selective use of sources and "numerous miscounts and untruths".[14] The defamation of the Prince of Orange and lack of recognition for his role during the Battle of Quatre Bras is attributed by some to efforts common to the 19th century to over-glorify and exaggerate Britain's military successes. 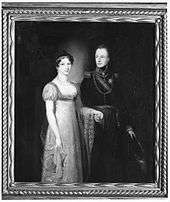 In 1814, William became briefly engaged with Princess Charlotte of Wales, only daughter of the Prince Regent, later George IV of the United Kingdom and his estranged wife Caroline of Brunswick. The engagement was arranged by the Prince Regent, but it was broken because Charlotte's mother was against the marriage and because Charlotte did not want to move to the Netherlands. On 21 February 1816 at the Chapel of the Winter Palace in St. Petersburg, William married Grand Duchess Anna Pavlovna of Russia, youngest sister to Czar Alexander I of Russia, who arranged the marriage to seal the good relations between Imperial Russia and the Netherlands.

On 17 February 1817 in Brussels, his first son Willem Alexander was born, the future King William III. Already in 1819, he was blackmailed over what Minister of Justice Van Maanen termed in a letter his "shameful and unnatural lusts": presumably bisexuality. Also his signing the constitutional reform of 1848, enabling a parliamentary democracy, may have been partly influenced by blackmail.[15] He may also have had a relationship with a dandy by the name of Pereira.[16]

William II enjoyed considerable popularity in what is now Belgium (then the Southern Netherlands), as well as in the Netherlands for his affability and moderation, and in 1830, on the outbreak of the Belgian revolution, he did his utmost in Brussels as a peace broker, to bring about a settlement based on administrative autonomy for the southern provinces, under the House of Orange-Nassau. His father then rejected the terms of accommodation that he had proposed without further consultation; afterwards, relations with his father were -once again- tense.

In April 1831, William II was military leader of the Ten days campaign in Belgium which was—in the end—driven back by French intervention. European intervention established Leopold of Saxe-Coburg-Gotha on the new throne of Belgium. Peace was finally established between Belgium and the Netherlands in 1839. 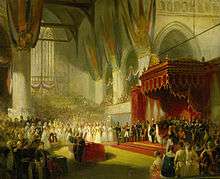 On 7 October 1840, on his father's abdication, he acceded to the throne as William II. Although he shared his father's conservative inclinations, he did not intervene in governmental affairs nearly as much as his father had. There was increased agitation for broad constitutional reform and a wider electoral franchise. Although William was certainly no democrat, he acted with sense and moderation.

The Revolutions of 1848 broke out all over Europe. In Paris the Bourbon-Orléans monarchy that had stolen "his" southern provinces fell. Warned that the revolution might spread to his Kingdom next, William decided to institute a more liberal regime, believing it was better to grant reforms instead of having them imposed on him on less favourable terms later. As he later put it, "I changed from conservative to liberal in one night". He chose a committee headed by the prominent liberal Johan Rudolf Thorbecke to create a new constitution. The new document provided that the Eerste Kamer (Senate), previously appointed by the King, would be elected indirectly by the Provincial States. The Tweede Kamer (House of Representatives) would be elected directly by those who paid a certain amount in taxes. The electoral system changed to census suffrage in electoral districts. Though at first not very notably, royal power decreased; political power passed to the Tweede Kamer. For all intents and purposes the king was now part of government rather than its master. That constitution of 1848, amended (most notably by the replacement of census suffrage by universal manhood suffrage and districts with nationwide party-list proportional representation, both in 1917) is still in effect today.

He swore in his first and only cabinet under the terms of the new constitution a few months before his sudden death in Tilburg, North Brabant (1849).

He was the 869th Knight of the Order of the Golden Fleece in Spain.

He is a recurring character in the historical novels of Georgette Heyer, most notably in An Infamous Army.

William appears as a character in the historical fiction novel Sharpe's Waterloo by Bernard Cornwell, and its television adaptation, in which he is portrayed by Paul Bettany.