The Meiji Jingu Stadium (明治神宮野球場, Meiji Jingū Yakyūjō) is a baseball stadium in Shinjuku, Tokyo, Japan. It opened in 1926 and holds 37,933 spectators. Property of the Meiji Shrine, it is the home field of the Tokyo Yakult Swallows professional baseball team. It also hosts college baseball, including the Tokyo Big6 Baseball League and the Tohto University Baseball League.

The second oldest baseball stadium in Japan, Meiji Jingu Stadium is one of the few professional stadiums still in existence where Babe Ruth played. In 1934, Ruth joined several other famous baseball players from the U.S., such as Lou Gehrig and Jimmie Foxx, in a 22-game tour of Japan. (Matsutarō Shōriki, popularly known as the father of Japanese professional baseball., organized the American tour; he survived an assassination attempt by right-wing nationalists for allowing foreigners to play baseball in Jingu Stadium.[2] He received a 16-inch-long wound from a broadsword during the assassination attempt.) 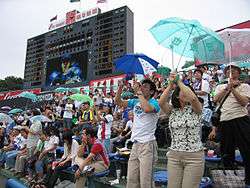 Tokyo Yakult Swallows fans at the right field bleachers
This article is issued from Wikipedia - version of the 11/5/2016. The text is available under the Creative Commons Attribution/Share Alike but additional terms may apply for the media files.