Guaranteed Rate Field is a baseball park located in Chicago, Illinois. It serves as the home ballpark for the Chicago White Sox, a Major League Baseball club competing in the American League (AL) Central division. The park is owned by the Illinois Sports Facilities Authority, but operated by the White Sox. The park opened for the 1991 season, after the White Sox had spent 81 years at the original Comiskey Park. It also opened with the name Comiskey Park but was renamed U.S. Cellular Field in 2003 after U.S. Cellular bought the naming rights at $68 million over 20 years.[7] The ballpark was renamed again to Guaranteed Rate Field on October 31, 2016, as Guaranteed Rate, a private residential mortgage company located in Chicago, purchased the naming rights to the ballpark.[8][9] On August 24, 2016, owner Jerry Reinsdorf announced a name change for the stadium, removing the U.S. Cellular Field name and replacing it with Guaranteed Rate Field beginning on November 1, 2016, and valid for thirteen years. The name change began on October 31, 2016.

The stadium is situated just to the west of the Dan Ryan Expressway in Chicago's Armour Square neighborhood, adjacent to the more famous neighborhood of Bridgeport. It was built directly across 35th Street from old Comiskey Park, which was demolished to make room for a parking lot that serves the venue. Old Comiskey's home plate location is represented by a marble plaque on the sidewalk next to Guaranteed Rate Field and the foul lines are painted in the parking lot. Also, the spectator ramp across 35th Street is designed in such a way (partly curved, partly straight but angling east-northeast) that it echoes the contour of the old first-base grandstand.

The park was completed at a cost of US$167 million. The current public address announcer is Gene Honda, who also serves as the PA announcer for the Chicago Blackhawks.

The stadium was the first new major sporting facility built in Chicago since Chicago Stadium in 1929. It was also the last one built before the wave of new "retro-classic" ballparks in the 1990s and 2000s. However, a few design features from the old park were retained. The front facade of the park features arched windows. Most notable is the "exploding scoreboard" which pays homage to the original installed by Bill Veeck at the old park in 1960. The original field dimensions and seating configuration were very similar to those of Royals Stadium (now Kauffman Stadium) in Kansas City—which had been the last baseball-only park built in the majors, in 1973. 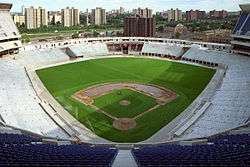 View from the upper deck during construction, September 1990

As originally built, the park was criticized by many fans because of the height of the upper deck. The original architect, HOK Sport (now Populous), wanted to eliminate the overhang problems present in many stadiums built since the 1970s. With this in mind, the upper deck was set back over the lower deck, and the stands rose fairly gradually. While it gave nearly every seat in the upper level an unobstructed view of the field, it also created one of the highest upper decks in baseball. The first row of seats in the upper deck at the new stadium is as far from the field as the highest row of seats in the upper deck at the old stadium. Fans sitting in this area didn't get much chance for relief, as it is one of the few parks in Major League Baseball that do not allow fans sitting in the upper deck to venture anywhere else in the park, e.g. lower deck concourse.

In response to fan complaints, the stadium has undergone numerous renovations since the 2001 season in order to retrofit the facility to current architectural trends. These changes have included building a multi-tiered concourse beyond center field, adjusting the fences to make the outfield less symmetrical and, most significantly, the removal of 6,600 seats at the top of the upper deck.

The uppermost story of the park now has a white and black screen behind the top row of seats and is topped by a flat canopy roof supported by black steel truss supports that obstruct the view of a few seats. The original blue seats were also replaced by forest green seats. The new green and black color scheme, upper level screen set back from the outer wall and canopy roof resemble features of the old Comiskey Park as well as other classic baseball stadiums. The White Sox have also added murals to the interior concourses, a prominent feature of the old stadium.

The stadium houses 103 luxury suites located on two levels, as well as 1,822 "club seats" on 300-level mezzanine between the lower deck and upper deck. The club seats receive in-seat wait-staff and benefit from an enclosed concourse with multiple television viewing areas and bar-style concessions. The stadium has 400 wheelchair-accessible seats, 38 public restrooms, 12 escalators and 15 elevators. The new suites were one example of why the old Comiskey Park was demolished, as suites generate more revenue. 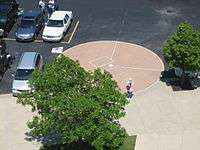 In 2001, extensive renovations were started by HKS Sports & Entertainment Group to make the park more fan-friendly: 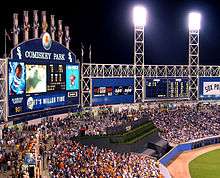 The then Comiskey Park in 2002 with the new batter's eye

Guaranteed Rate Field (then U.S. Cellular Field) in 2004 with the new roof and lighting 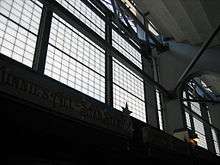 Guaranteed Rate Field (then U.S. Cellular Field) in 2005 with the new Fundamentals Deck in left field 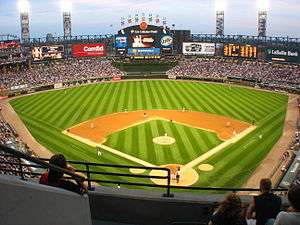 Guaranteed Rate Field (then U.S. Cellular Field) at night in 2007

Renovations added not part of the original plan. 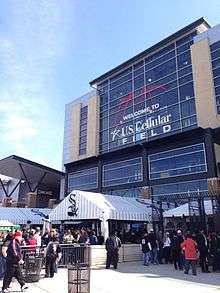 There are 11 retired numbers on the facade of the Home Plate Club. 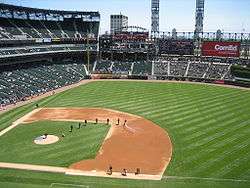 The view from the 500 level 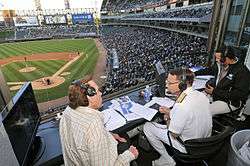 The view from the White Sox radio booth 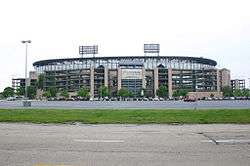 The gate 5 entrance at Guaranteed Rate Field (then U.S. Cellular Field) in 2007 before renovations took place for the 2009 season

Transportation to the stadium 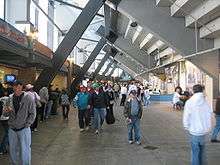 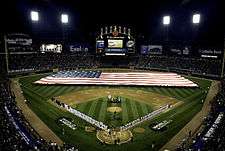 The National Anthem before Game 1 of the 2005 World Series 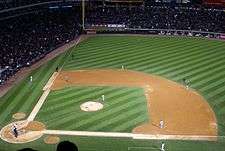 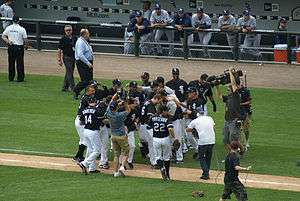 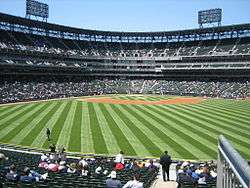 Guaranteed Rate Field before a game

In film and other media

Guaranteed Rate Field has appeared in films such as Rookie of the Year (1993), Major League II (1994), Little Big League (1994), My Best Friend's Wedding (1997), and The Ladies Man (2000). In Rookie of the Year the stadium played the role of Dodger Stadium and in Little Big League the stadium played the role of all opposing ballparks except for Yankee Stadium and Fenway Park. Commercials for the PGA Tour, Nike, Reebok and the Boys & Girls Clubs of America have been filmed at the park.