Tokyo Dome's original nickname was "The Big Egg", with some calling it the "Tokyo Big Egg". Its dome-shaped roof is an air-supported structure, a flexible membrane held up by slightly pressurizing the inside of the stadium.

It is the home field of the Yomiuri Giants baseball team, and has also hosted music concerts, basketball, American football and association football games, as well as puroresu (pro-wrestling) matches, mixed martial arts events, kickboxing events, and monster truck races. It is also the location of the Japanese Baseball Hall of Fame which chronicles the history of baseball in Japan.

The Tokyo dome was developed by Nikken Sekkei and Takenaka Corporation.

Mariah Carey's three sold out shows at the Dome during her 1996 Daydream World Tour on March 7, 10 and 14 set records when all 150,000 tickets sold in under 3 hours. She later performed at the Dome for 4 nights during her 1998 Butterfly World Tour on January 11, 14, 17, 20 and 2 nights during her 2000 Rainbow World Tour on March 7 and 9. Overall, Carey performed at the Tokyo Dome 9 sold out concerts to date.[7] She holds the record for the most number of shows performed at the venue for a female solo artist, both in her country of origin and international. The second is Janet Jackson with a total of 8 shows. Mick Jagger was the first international act to play in the Tokyo Dome on March 22 and 23, 1988. Bon Jovi followed suit and played at the Tokyo Dome on 31 December 1988. The band has since performed total of 19 concerts at Tokyo Dome, most recently in 2010 as part of The Circle Tour. American singer Janet Jackson performed at the Dome in 1990, selling out four shows in 7 minutes, setting a record for the fastest sellout in the history of Tokyo Dome.[8] This record was later surpassed by Japanese rock band L'Arc~en~Ciel.[7] The stadium played host to Amnesty International's Human Rights Now! Benefit Concert on September 27, 1988.

The Rolling Stones performed 10 concerts at the stadium during Steel Wheels/Urban Jungle Tour, later they performed seven concerts during the Voodoo Lounge Tour in 1995. The band returned to Japan in 1998 to play four more concerts, part of the Bridges to Babylon Tour then again in 2003, for 2 more concerts were held at the dome during Licks Tour. After three years, the band returned in 2006 to perform two more shows at the venue as part of their A Bigger Bang Tour. They returned again in February/March 2014 to perform three more shows as part of their 14 On Fire tour.

American singer Prince performed at the dome 6 times between 1989 and 1992 of which every single concert was recorded.[9] In addition, Prince's The Continental music video was filmed in the dome off of his 1992 album Love Symbol.

Heavy metal band X Japan has performed at Tokyo Dome many times, including their last concert with former bassist Taiji on January 7, 1992 (On the Verge of Destruction 1992.1.7 Tokyo Dome Live) and their last concert before disbanding on December 31, 1997 (The Last Live Video). The arena also hosted their first concerts after reuniting in 2007; March 28–30, 2008.[10]

Yellow Magic Orchestra played two sold out concerts at the arena on June 10–11, 1993. This was their only two concerts since their dissolution in 1983 and would be their last until their reformation in 2007.[11]

American recording artist Britney Spears performed at the Tokyo Dome as part of her Dream Within a Dream Tour on April 25, 2002. At 20 years old, Spears became the youngest solo artist to perform at the venue.

On July 22, 2007, Kinki Kids held their 10th anniversary concert at Tokyo Dome, which drew a crowd of about 67,000 fans, making it the biggest concert ever held at the Dome. The record was previously held by Tsuyoshi Nagabuchi in 1992 when his concert drew an audience of 65,000.[15]

In July 2009, TVXQ, the first Korean Group who performed in Tokyo dome, played the last two shows of their 4th Live Tour 2009: The Secret Code at the Tokyo Dome.[17] To date, the group have held a total of 19 shows. They were able to attract 110,000 fans on their final concert held at Tokyo Dome.

In December 2010, Luna Sea performed three consecutive days at the arena during their "20th Anniversary World Tour Reboot -to the New Moon-" limited reunion world tour. The first two (sold out) concerts on December 23–24 were a formal part of the tour, where they performed their popular songs as well as two new ones. The last day, December 25, was a free, black clothing only, concert titled "Lunacy Kurofuku Gentei Gig ~the Holy Night~" with an attendance of 50,000 people, chosen out of the 500,000 applicants where they played only older material.[19]

Visual Kei group The Gazette performed at the Tokyo Dome for first time on December 26, 2010, as part of their Nameless Liberty Six Bullets tour.

On December 3 and 4, 2011, Japanese voice actress Nana Mizuki became the first voice actress-singer to perform at the Tokyo Dome, with her concert titled Live Castle-Queen & King, as a celebration of her 10th anniversary.

The group Kara was the first Korean girl group to perform at the Tokyo Dome in 2013. The concert sold out all 45,000 tickets within five minutes.[27]

Van Halen's June 21, 2013 performance at the Tokyo Dome was recorded for the live album Tokyo Dome Live in Concert, released in March 2015.

Girls' Generation performed their solo concert at the Tokyo Dome on December 9, 2014. They are the second Korean girl group after Kara to perform at the Dome.[28][29]

In 2015, South Korean boy band Exo performed three sold out shows in front of 150,000 fans at Tokyo Dome from November 6 to November 8 as part of their Exo Planet ＃2 - The Exo'luxion world tour.[31]

In 2016, a 2.5 次元 idol group, μ's from「LoveLive!」performed for approximately 110,000 fans at Tokyo Dome from 31 March to 1 April 2016 for their final live, titled「μ's Final LoveLive!μ'sic Forever」. Live viewing of the event was also made throughout Japan and 10 other Asia and Oceanic countries.[32] This was the first anisong live event at Tokyo Dome.

On September 19, and September 20, 2016, kawaii metal group, Babymetal performed 2 sold out shows at the Tokyo Dome, their final concerts of Babymetal's Legend-Resistance 2016 World Tour performing for 110,000 people. Babymetal is also the youngest rock band to ever perform at the dome.

Coldplay will perform at the venue on April 19, 2017, as part of their A Head Full of Dreams Tour. 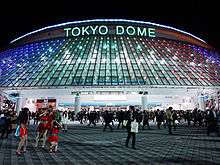 In professional wrestling, New Japan Pro Wrestling has run the January 4 Tokyo Dome Show, currently promoted as Wrestle Kingdom, every year since 1992. The event is the biggest in puroresu, and roughly analogous to WrestleMania in the United States.

The Chicago Cubs and the New York Mets played a pair of games here to open the 2000 season, the first time American Major League Baseball teams have played regular season games in Asia. The New York Yankees and the Tampa Bay Devil Rays played two games there in March of 2004 to open that season. The Boston Red Sox and the Oakland Athletics opened the 2008 MLB season in Japan as well. These teams also competed against Japanese teams.[33] The Boston Red Sox beat the Oakland Athletics 6–5 in extra innings in the first game.[34] To open the 2012 MLB season the Seattle Mariners and the Oakland A's played a two-game series on March 28–29. In game one Seattle led by Ichiro's 4 hits won 3-1 in 11 innings.[35]