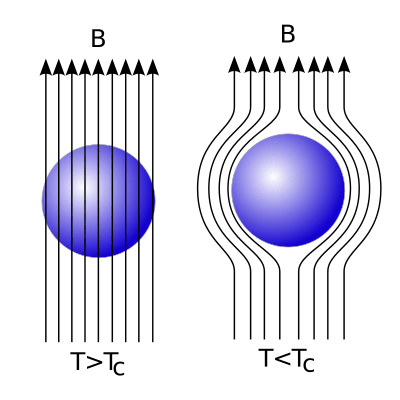 Diagram of the Meissner effect. Magnetic field lines, represented as arrows, are excluded from a superconductor when it is below its critical temperature.

A superconductor with little or no magnetic field within it is said to be in the Meissner state. The Meissner state breaks down when the applied magnetic field is too large. Superconductors can be divided into two classes according to how this breakdown occurs. In Type I superconductors, superconductivity is abruptly destroyed when the strength of the applied field rises above a critical value Hc. Depending on the geometry of the sample, one may obtain an intermediate state[2] consisting of a baroque pattern[3] of regions of normal material carrying a magnetic field mixed with regions of superconducting material containing no field. In Type II superconductors, raising the applied field past a critical value Hc1 leads to a mixed state (also known as the vortex state) in which an increasing amount of magnetic flux penetrates the material, but there remains no resistance to the flow of electric current as long as the current is not too large. At a second critical field strength Hc2, superconductivity is destroyed. The mixed state is actually caused by vortices in the electronic superfluid, sometimes called fluxons because the flux carried by these vortices is quantized. Most pure elemental superconductors, except niobium and carbon nanotubes, are Type I, while almost all impure and compound superconductors are Type II.

The Meissner effect was given a phenomenological explanation by the brothers Fritz and Heinz London, who showed that the electromagnetic free energy in a superconductor is minimized provided

where H is the magnetic field and λ is the London penetration depth.

This equation, which is known as the London equation, predicts that the magnetic field in a superconductor decays exponentially from whatever value it possesses at the surface. 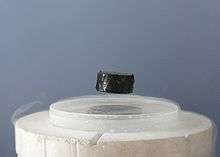 A magnet levitating above a superconductor cooled by liquid nitrogen.

In a weak applied field, a superconductor "expels" nearly all magnetic flux. It does this by setting up electric currents near its surface. The magnetic field of these surface currents cancels the applied magnetic field within the bulk of the superconductor. As the field expulsion, or cancellation, does not change with time, the currents producing this effect (called persistent currents) do not decay with time. Therefore, the conductivity can be thought of as infinite: a superconductor.

Any perfect conductor will prevent any change to magnetic flux passing through its surface due to ordinary electromagnetic induction at zero resistance. The Meissner effect is distinct from this: when an ordinary conductor is cooled so that it makes the transition to a superconducting state in the presence of a constant applied magnetic field, the magnetic flux is expelled during the transition. This effect cannot be explained by infinite conductivity alone. Its explanation is more complex and was first given in the London equations by the brothers Fritz and Heinz London. It should thus be noted that the placement and subsequent levitation of a magnet above an already superconducting material does not demonstrate the Meissner effect, while an initially stationary magnet later being repelled by a superconductor as it is cooled through its critical temperature does.

Superconductors in the Meissner state exhibit perfect diamagnetism, or superdiamagnetism, meaning that the total magnetic field is very close to zero deep inside them (many penetration depths from the surface). This means that their magnetic susceptibility,

= −1. Diamagnetics are defined by the generation of a spontaneous magnetization of a material which directly opposes the direction of an applied field. However, the fundamental origins of diamagnetism in superconductors and normal materials are very different. In normal materials diamagnetism arises as a direct result of the orbital spin of electrons about the nuclei of an atom induced electromagnetically by the application of an applied field. In superconductors the illusion of perfect diamagnetism arises from persistent screening currents which flow to oppose the applied field (the Meissner effect); not solely the orbital spin.

Paradigm for the Higgs mechanism

The Meissner effect of superconductivity serves as an important paradigm for the generation mechanism of a mass M (i.e. a reciprocal range,

where h is Planck constant and c is speed of light) for a gauge field. In fact, this analogy is an abelian example for the Higgs mechanism,[6] through which in high-energy physics the masses of the electroweak gauge particles,
W±
and
Z
are generated. The length

is identical with the London penetration depth in the theory of superconductivity.[7][8]