Michael H. Steinhardt (born December 7, 1940) is an American hedge fund manager, financier, investor, newspaper publisher, and philanthropist active in Jewish causes. He was one of the first prominent hedge fund managers, and is a graduate of the Wharton School of the University of Pennsylvania. He founded Steinhardt, Fine, Berkowitz & Co., a hedge fund, in 1967. Author Sebastian Mallaby referred to Steinhardt as "a legend in the story of hedge funds, partly because of his success as a trader, but also because of his personality."[1]

Born to an American Jewish family,[2] Steinhardt is the son of Sol Frank Steinhardt, a compulsive high-stakes gambler, New York's leading jewel fence (according to then-DA Frank Hogan), and convicted felon. His father was close friends with underworld crime bosses Meyer Lansky, Vincent Alo (aka "Jimmy Blue Eyes" Alo), and Albert Anastasia (he was out gambling with Anastasia the night before he was killed). Sol, aka "Red McGee," was later convicted on charges of buying and selling stolen jewelry and sentenced to five to ten years in prison.[3]

Steinhardt went to the University of Pennsylvania, graduating in 1960. He started his career working for the mutual fund Calvin Bullock and the brokerage firm Loeb, Rhoades & Co. (the precursor to Shearson Loeb Rhoades).[3] Steinhardt's father was his first investment client giving his son envelopes stuffed with cash to put in the stock market giving him seed money to begin his investment career.[3]

Working as an analyst at Loeb, Rhoades & Co., Steinhardt followed the conglomerate industry, which included companies such as Automatic Sprinkler (now defunct), City Investing (also defunct), and the best-known conglomerate of its day, Gulf+Western (now part of Viacom and Viacom's spinoff CBS).

In 1967, using earnings from his investments, Steinhardt founded the hedge fund Steinhardt, Fine, and Berkowitz (later Steinhardt Partners) with co-investors William Salomon, former managing partner of Salomon Brothers and Jack Nash, founder of Odyssey Partners.[3] Steinhardt Partners averaged an annualized return for its clients of 24.5%, after a 1% management fee and a "performance fee" of 15% (early in his career, later 20%) of all annual gains, realized and unrealized, nearly triple the annualized performance of the S&P 500 Index over the same timeframe.

After decades of successfully managing the fund, Steinhardt and his firm were investigated for allegedly trying to manipulate the short-term Treasury Note market in the early 1990s. He personally paid 75% of a total fine of $70 million as part of settlement with the U.S. Securities and Exchange Commission and Department of Justice. His firm made $600 million on the Treasury positions.[4] In "No Bull," Steinhardt said he did nothing wrong, but merely settled the case in order to "move on." Following a negative performance in his hedge fund in 1994, Steinhardt Partners enjoyed an excellent 1995, with performance in line with its historical record. The hedge fund closed and distributed all monies to its limited partners at the end of 1995, leaving Steinhardt himself very wealthy and very liquid.

In 2004, Steinhardt came out of retirement to work for Index Development Partners, Inc.,[5] now known as WisdomTree Investments. He is chairman of WisdomTree, which offers dividend and earnings-based index funds rather than traditional index funds based on market capitalization. As of December 31, 2012, WisdomTree had $18.3 billion under management and is growing by 10% a month.[6] During the fall of 2007 and 2008, Wisdom Tree's growth stagnated, as the stock market, especially the financial sector, in which Wisdom Tree's dividend-based funds are overweighted, tanked, as did Wisdomtree's stock. However, in recent months, as the Wisdom Tree funds tended to outperform their "bogies," asset growth resumed its earlier pace and its stock price appreciated accordingly. In 2010, Steinhardt was hired by IDT Corporation to serve as Chairman of the Board of Israel Energy Initiatives Ltd (IEI), Genie’s Israel-based alternative energy affiliate.

In 1967, Steinhardt met his future wife Judy in a car pool he organized. During one of the carpools into New York City, he mentioned the name of the grain elevator company Colorado Milling and Grain Elevator. Judy mentioned the company to her father who invested in the company and made a substantial profit after Colorado Milling was acquired by Great Western Sugar in 1968; the merged company was renamed Great Western United. Judy is the chairwoman of New York University's Institute of Fine Arts and of the American Friends of the Israel Museum.[7] They have three children: David, Daniel and Sara.[8] His daughter, Sara, a former journalist and parenting columnist for The New York Sun, is married to South African hedge fund manager David Berman and is the president of the Hebrew Language Academy Charter School in Brooklyn.[9]

In Sebastian Mallaby's 2010 book entitled More Money Than God: Hedge Funds and the Making of a New Elite, he dedicated a chapter to Michael Steinhardt. He described Steinhardt as a "lover of botany and a collector of exotic fauna," living in his retirement "on his country estate an hour's drive north of New York City." Mallaby includes a photo of Steinhard "dancing on his estate opposite... an elegant blue crane . . . that had taken to courting him with a graceful gavotte."[10]

Steinhardt identifies himself as an atheist who nonetheless strongly supports cultural Jewish identity and a connection to Israel.[11] Israel is his “substitute for religion.” Steinhardt states: “While the religion of Judaism is so deeply disappointing – its practice, its verbiage, its inability to reflect realistically upon our lives; I could forgive almost anything vis-à-vis Israel. Israel was and still is my Jewish miracle!”[12] 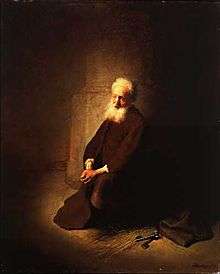 Ceded to American Friends of the Israel Museum by Judy and Michael Steinhardt: St. Peter in Prison (The Apostle Peter Kneeling), Rembrandt, 1631.

Steinhardt is an art collector, especially of antiquities. Highlights of his Judaica collection are viewable online. A special exhibition, "Ancient Art of the Cyclades", held at the Katonah Museum of Art included some pieces owned by him. He also sits on the American advisory board of Christie's, the art & antiques auction house.[13]

Steinhardt has been an active philanthropist, donating over $125 million to Jewish causes. He and Charles Bronfman co-founded Taglit-Birthright Israel, which has to date sent over 500,000 young Jews aged 18–26 on a 10-day trip to Israel without charge.

In the 1990s, Steinhardt gave Steeple Jason Island and Grand Jason Island in the Falkland archipelago to the Wildlife Conservation Society (WCS), along with USD 425,000 for a research station, to be named after himself and his wife.[14]

The Steinhardt School of Culture, Education and Human Development at New York University bears his name in recognition of two $10 million donations.[15]

Steinhardt is also chairman of the board at The Steinhardt Foundation for Jewish Life (formerly Jewish Life Network) and Taglit-Birthright Israel. He also makes public appearances, speaking with young Jewish kids through organizations such as Ezra USA and RAJE.[17]

In 2001, Steinhardt published an autobiography: No Bull: My Life in and out of Markets. In this book, he addressed for the first time the question of his father, Sol Frank Steinhardt, who also went by the moniker "Red McGee." "Red" Steinhardt was convicted in 1958 on two counts of buying and selling stolen jewelry, and was sentenced to serve two 5-to-10 year terms, to run consecutively, in the New York State prison system. (He did most of his time at Dannemora, a prison in upstate NY near the Canada–US border, but had his sentence reduced to time served after two years due to allegations of prosecutorial misconduct.) Regarded by D.A. Frank Hogan as the number one jewelry fence in New York, "Red," according to No Bull, was an associate of noted underworld figures such as Meyer Lansky, Vincent "Jimmy Blue Eyes" Alo (incorrectly named "Aiello" in No Bull), and Albert Anastasia (No Bull wrongly refers to him as "Joey".) In No Bull, Steinhardt describes how his father bankrolled his early forays into the stock market by giving him envelopes stuffed with $10,000 in cash and sometimes much more than that. The book also suggests that Steinhardt's education at the Wharton School may have been paid for with illicit funds.[18]

Steinhardt is active in political circles ranging from centrist Democratic to neo-conservative, having been a past chairman of the Democratic Leadership Council and a board member of the Foundation for the Defense of Democracies, to which he donated $250,000 in 2002.[19] According to Newsmeat.com, a tracker of publicly available campaign contributions, in the 2000 New York senatorial primary, he donated $1,000 (then the maximum allowable under law) to Republican Rudy Giuliani. When Mayor Giuliani dropped out of the race, Steinhardt contributed an equal amount to Giuliani's successor, Rick Lazio. Steinhardt also gave $1,000 to Lazio in the general election.

In 2001, Steinhardt made his foray into publishing, he along with several other investors including Conrad Black, founded the New York Sun, a niche New York City newspaper best known for its unflinching pro-Israel support and generally (but not invariably) neo-conservative outlook. Steinhardt wrote a letter to President Clinton advocating the pardon of Marc Rich, calling him "my friend...who has been punished enough" (on January 20, 2001, Clinton's last day in office, Rich was in fact pardoned.)[20] Steinhardt was an early promoter of the possible presidential candidacy of Michael Bloomberg in 2008.[21]