Frank Morrison Spillane (March 9, 1918 – July 17, 2006), better known as Mickey Spillane, was an American crime novelist, whose stories often feature his signature detective character, Mike Hammer. More than 225 million copies of his books have sold internationally. Spillane was also an occasional actor, once even playing Hammer himself.[1][2]

Born in Brooklyn, New York City, and raised in Elizabeth, New Jersey, Spillane was the only child of his Irish bartender father, John Joseph Spillane, and his Scottish mother, Catherine Anne. Spillane attended Erasmus Hall High School, graduating in 1935.[3] He started writing while in high school, briefly attended Fort Hays State College in Kansas and worked a variety of jobs, including summers as a lifeguard at Breezy Point, Queens, and a period as a trampoline artist for the Ringling Bros. and Barnum & Bailey Circus.

During World War II Spillane enlisted in the Army Air Corps, becoming a fighter pilot and a flight instructor.[4] While flying over Murrells Inlet, South Carolina, he said, "That is where I want to live."[5] Later, he would use his celebrity status to publicize the Grand Strand on TV, but when it became a popular resort area and traffic became a problem, Spillane said, "I shouldn't have told people about it."[5] 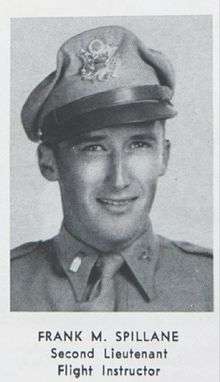 He was an active Jehovah's Witness.[6] Mickey and Mary Ann Spillane had four children (Caroline, Kathy, Michael, Ward), and their marriage ended in 1962. In November 1965, he married his second wife, nightclub singer Sherri Malinou. After that marriage ended in divorce (and a lawsuit) in 1983, Spillane shared his waterfront house in Murrells Inlet with his third wife, Jane Rogers Johnson, whom he married in October 1983, and her two daughters (Jennifer and Margaret Johnson).

In the 1960s, Spillane became a friend of the novelist Ayn Rand. Despite their apparent differences, Rand admired Spillane's literary style, and Spillane became, as he described it, a "fan" of Rand's work.[7]

In 1989, Hurricane Hugo ravaged his Murrells Inlet house to such a degree it had to be almost entirely reconstructed. A television interview showed Spillane standing in the ruins of his house.

He received an Edgar Allan Poe Grand Master Award in 1995. Spillane's novels went out of print, but in 2001, the New American Library began reissuing them.

Spillane died July 17, 2006 at his home in Murrells Inlet, of pancreatic carcinoma.[8][9][10] After his death, his friend and literary executor, Max Allan Collins, began the task of editing and completing Spillane's unpublished typescripts, beginning with a Mike Hammer novel, The Goliath Bone (2008).

In July 2011, the town of Murrells Inlet named U.S 17 Business the "Mickey Spillane Waterfront 17 Highway." The proposal first passed the Georgetown County Council in 2006 while Spillane was still alive, but the South Carolina General Assembly rejected the plan then.[5]

He is survived by his wife, Jane Spillane.

Spillane started as a writer for comic books. While working as a salesman in Gimbels department store basement in 1940, he met tie salesman Joe Gill, who later found a lifetime career in scripting for Charlton Comics. Gill told Spillane to meet his brother, Ray Gill, who wrote for Funnies Inc., an outfit that packaged comic books for different publishers. Spillane soon began writing an eight-page story every day. He concocted adventures for major 1940s comic book characters, including Captain Marvel, Superman, Batman and Captain America. Two-page text stories, which he wrote in the mid-1940s for Timely, appeared under his name and were collected in Primal Spillane (Gryphon Books, 2003).

Spillane joined the United States Army Air Forces on December 8, 1941, the day after the attack on Pearl Harbor. In the mid-1940s he was stationed as a flight instructor in Greenwood, Mississippi, where he met and married Mary Ann Pearce in 1945. The couple wanted to buy a country house in the town of Newburgh, New York, 60 miles north of New York City, so Spillane decided to boost his bank account by writing a novel. In 19 days he wrote I, the Jury. At the suggestion of Ray Gill, he sent it to E. P. Dutton.

With the combined total of the 1947 hardcover and the Signet paperback (December 1948), I, the Jury sold 6 1/2 million copies in the United States alone. I, the Jury introduced Spillane's most famous character, hardboiled detective Mike Hammer. Although tame by current standards, his novels featured more sex than competing titles, and the violence was more overt than the usual detective story.[2] An early version of Spillane's Mike Hammer character, called Mike Danger, was submitted in a script for a detective-themed comic book. " 'Mike Hammer originally started out to be a comic book. I was gonna have a Mike Danger comic book,' [Spillane] said in a 1984 interview."[11] Two Mike Danger comic-book stories were published in 1954 without Spillane's knowledge, as well as one featuring Mike Lancer (1942). These were published with other material in "Byline: Mickey Spillane," edited by Max Allan Collins and Lynn F. Myers, Jr. (Crippen & Landru publishers, 2004).

The Signet paperbacks displayed dramatic front cover illustrations. Lou Kimmel created the cover paintings for My Gun Is Quick, Vengeance Is Mine, One Lonely Night and The Long Wait. The cover art for Kiss Me, Deadly was by James Meese.

Spillane portrayed himself as a detective in Ring of Fear (1954), and rewrote the film without credit for John Wayne's and Robert Fellows' Wayne-Fellows Productions. The film was directed by screenwriter James Edward Grant. Several Hammer novels were made into movies, including Kiss Me Deadly (1955). In The Girl Hunters (1963) filmed in England, Spillane himself appeared as Hammer, one of the few occasions in film history in which an author of a popular literary hero has portrayed his own character. Spillane was scheduled to film The Snake as a follow-up, but the film was never made.[13]

On October 25, 1956, Spillane appeared on The Ford Show, Starring Tennessee Ernie Ford, with interest on his Mike Hammer novels.[14] In January 1974, he appeared with Jack Cassidy in the television series Columbo in the episode Publish or Perish. He portrayed a writer who is murdered.[15]

In 1969, Spillane formed a production company with Robert Fellows who had produced The Girl Hunters to produce many of his books, but Fellows died soon after and only The Delta Factor was produced.[16]

During the 1980s, he appeared in Miller Lite beer commercials.[17] In the 1990s, Spillane licensed one of his characters to Tekno Comix for use in a science-fiction adventure series, Mike Danger. In his introduction to the series, Spillane said he had conceived of the character decades earlier but never used him.[11]

When literary critics had a negative reaction to Spillane's writing, citing the high content of sex and violence, Spillane answered with a few terse comments: "Those big-shot writers could never dig the fact that there are more salted peanuts consumed than caviar... If the public likes you, you're good." Early reaction to Spillane's work was generally hostile: Malcolm Cowley dismissed the Mike Hammer character as "a homicidal paranoiac",[18] John G. Cawelti called Spillane's writing "atrocious",[18] and Julian Symons called Spillane's work "nauseating".[18] By contrast, Ayn Rand publicly praised Spillane's work at a time when critics were almost uniformly hostile. She considered him an underrated if uneven stylist and found congenial the black-and-white morality of the Hammer stories. She later publicly repudiated what she regarded as the amorality of Spillane's Tiger Mann stories.

Spillane's work was later praised by Max Allan Collins, William L. DeAndrea[2] and Robert L. Gale.[18] DeAndrea argued that although Spillane's characters were stereotypes, Spillane had a "flair for fast-action writing", that his work broke new ground for American crime fiction, and that Spillane's prose "is lean and spare and authentically tough, something that writers like Raymond Chandler and Ross Macdonald never achieved".[2] German painter Markus Lüpertz claimed that Spillane's writing influenced his own work, saying that Spillane ranks as one of the major poets of the 20th century. American comic book writer Frank Miller has mentioned Spillane as an influence for his own hardboiled style. Avant-Garde musician John Zorn composed an album influenced by Spillane's writing titled Spillane, consisting of three file-card pieces, as well as a work for voice, string quartet and turntables.