Michael "Mike" Hammer is a fictional hard boiled detective created by the American author Mickey Spillane in the 1947 book I, the Jury.

In 1946, Spillane, an established comic-book writer, worked with illustrator Mike Roy to create the private-eye character Mike Danger for proposed comic-book or comic-strip publication. Unable to sell the project as a comic, he reworked the story as the novel I, the Jury, converting Mike Danger to Mike Hammer and supporting character Holly to Velda.[1] Spillane wrote the work in nine days by some accounts, 19 in others.[2]

While pulp detectives such as Sam Spade and Philip Marlowe are hard-boiled and cynical, Hammer is in many ways the archetypal "hard man": brutally violent, and fueled by a genuine rage against violent crime that never afflicts Raymond Chandler's or Dashiell Hammett's heroes. In The Big Kill Hammer describes himself to a bargirl as a misanthrope. Hammer is also loosely based on the real-life hard-boiled Texas Ranger and gunfighter Frank Hamer, who was most famous for tracking down and killing Clyde Barrow and Bonnie Parker in 1934.

While other hardboiled heroes bend and manipulate the law, Hammer often views it as an impediment to justice, the one virtue he holds in absolute esteem. Hammer nevertheless has a strong respect for the majority of police, realizing they have a difficult job and their hands are frequently tied by the law when trying to stop criminals.

Mike Hammer is a no-holds-barred private investigator who carries a .45 Colt M1911A1 in a shoulder harness under his left arm. His love for his secretary Velda is outweighed only by his willingness to kill a killer. Hammer's best friend is Pat Chambers, Captain of Homicide NYPD. Hammer was a World War II army veteran who spent two years fighting jungle warfare in the Pacific theatre against Japan. Hammer is also patriotic and anti-communist. The novels are peppered with remarks by Hammer supporting American troops in Korea, and in Survival...Zero Vietnam. In One Lonely Night, where Hammer attends a communist meeting in a park, his reaction to the speaker's propaganda is a sarcastic "Yeah."

So far as violence is concerned, the Hammer novels leave little to the imagination. Written in the first person, Hammer describes his violent encounters with relish. In all but a few novels, Hammer's victims are often left vomiting after a blow to the stomach or groin.

Mickey Spillane has said of his character: See, heroes never die. John Wayne isn't dead, Elvis isn't dead. Otherwise you don't have a hero. You can't kill a hero. That's why I never let him get older.

The Washington Times obituary of Spillane said of Hammer, "In a manner similar to Clint Eastwood's Dirty Harry, Hammer was a cynical loner contemptuous of the 'tedious process' of the legal system, choosing instead to enforce the law on his own terms."[3]

Several movies and radio and television series have been based on the books in the Hammer series. The actor most closely identified with the character in recent years has been Stacy Keach, who portrayed Hammer in a CBS television series, Mickey Spillane's Mike Hammer, which ran from 1984–1987 and had a syndicated revival in 1997–1998. (An earlier syndicated version, originally aired in 1957–1958, starred Darren McGavin as Hammer.) Spillane himself played Hammer in a 1963 motion picture adaptation of The Girl Hunters. Spillane himself favoured ex-Marine and former Newburgh, New York police officer Jack Stang, on whom he based the character, to play him. Stang appeared with Spillane in the 1954 film Ring of Fear and in the film adaptation of I, the Jury. 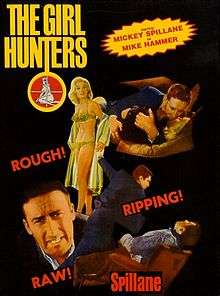 DVD cover of The Girl Hunters

There have been several television shows based on the exploits of Mike Hammer. 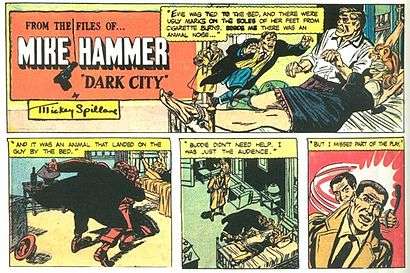 A short-lived comic strip starring Mike Hammer was distributed by Phoenix Features Syndicate from 1953 to 1954. It was entitled From the Files of... Mike Hammer and written by Spillane, Ed Robbins and Joe Gill, with art by Ed Robbins. Collections of the strip were published in the 1980s.[5]