The 1974 FIFA World Cup, the tenth staging of the World Cup, was held in West Germany (including West Berlin) from 13 June to 7 July. The tournament marked the first time that the current trophy, the FIFA World Cup Trophy, created by the Italian sculptor Silvio Gazzaniga, was awarded. The previous trophy, the Jules Rimet Trophy, had been won for the third time by Brazil in 1970 and awarded permanently to the Brazilians. The host nation won the title beating the Netherlands in the final, 2–1. The victory was the second for West Germany, who had also won in 1954. Australia, East Germany, Haiti and Zaire made their first appearances at the final stage, and the Netherlands and Poland their first since 1938.

West Germany was chosen as the host nation by FIFA in London, England on 6 July 1966. Hosting rights for the 1978 and 1982 tournaments were awarded at the same time. West Germany agreed a deal with Spain by which Spain would support West Germany for the 1974 tournament, and in return West Germany would allow Spain to bid for the 1982 World Cup unopposed.

Ninety-eight countries took part in the qualifying tournament, and some of football's most successful nations did not qualify. Between them, the champions of the 1966 tournament (England), France, the hosts of the 1970 tournament (Mexico), 1966 third-place finishers Portugal, Czechoslovakia, Hungary and Spain were knocked out and failed to qualify for the finals. The USSR was disqualified after the playoff against Chile. First-time qualifiers included Australia, which would not qualify again until the next time the tournament was held in Germany, in 2006, and Zaire, the first team from sub-Saharan Africa to reach the finals.

16 teams qualified, divided into four groups of four. Each played a round-robin with two points for a win and one for a draw, and goal difference used to separate teams level on points. The top two teams from each group advanced to the next stage. However, in a change from the format used in the previous five competitions, the second round consisted of another group stage: the eight remaining teams were divided into two groups of four. The winners of each group played each other in the final, and the second place teams in each group played each other in the third/fourth place match.

The tournament was held mostly in bad weather, and the stadia had few protected places. Few western European nations had qualified, of which most were eliminated early. Fans from the Eastern neighbor states were hindered by political circumstances.

Carlos Caszely of Chile became the first player to be sent off with a red card in a World Cup match, during their match against West Germany. Red cards were formally introduced in World Cup play in 1970, but no players were sent off in that tournament.

Two teams made a particularly powerful impact on the first round. The Netherlands demonstrated the "Total football" techniques pioneered by the top Dutch club Ajax, in which specialised positions were virtually abolished for the outfield players, and individual players became defenders, midfielders or strikers as the situation required. The Dutch marked their first World Cup finals since 1938 by topping their first-round group, with wins over Uruguay and Bulgaria and a draw with Sweden. Sweden joined the Dutch in the second group round after beating Uruguay 3–0.

Poland, meanwhile, took maximum points from a group containing two of the favourites for the tournament. They beat Argentina 3–2, trounced Haiti 7–0, then beat Italy 2–1 – a result that knocked the Italians out of the Cup and resulted in Argentina sneaking to the second group round on goal difference. While Haiti didn't do particularly well in their first World Cup finals (losing all three of their games) they did have one moment of glory. In their opening game against Italy, they managed to take the lead with a goal from Emmanuel Sanon, before eventually losing 3–1 (Italy had not conceded a goal in 12 international matches). That goal proved to be a significant goal as it ended Dino Zoff's run of 1142 minutes without conceding a goal.

Group 2 was a particularly close group. With Brazil, Yugoslavia and Scotland drawing all their games against each other, it was decided by the number of goals these three teams scored when defeating Zaire. Yugoslavia hammered the African nation 9–0, equalling a finals record for the largest margin of victory. Brazil beat them 3–0. Scotland could only manage a 2–0 margin, and so were edged out of the tournament on goal difference. They also became the first ever country to be eliminated from a World Cup Finals without having lost a match.

Group 1 contained both East Germany and the host West Germany, and they both progressed at the expense of Chile and Australia. But the big clash was between the two German teams. West Germany was already assured of progression to the second round whatever the result. In one of the most politically charged matches of all time, it was the East that won, thanks to a late Jürgen Sparwasser goal. This embarrassing result forced a realignment of the West German team that helped them win the Cup.

Coincidentally, the two second-round groups both produced matches that were, in effect, semi-finals. In Group A, the Netherlands and Brazil met after each had taken maximum points from their previous two matches. In Group B, the same was true of West Germany and Poland – so the winners of these two games would contest the final.

In Group A, two goals from the inspirational Johan Cruyff helped the Dutch side thrash Argentina 4–0. At the same time, Brazil defeated East Germany 1–0. The Dutch triumphed over East Germany 2–0 while in the "Battle of the South Americans", Brazil managed to defeat Argentina 2–1 in a scrappy match. Argentina and East Germany drew 1–1 and were on their way home while the crucial match between the Netherlands and Brazil turned into another triumph for 'total football', as second-half goals from Johan Neeskens and Cruyff put the Netherlands in the final. However the match would also be remembered for harsh defending on both sides.

Meanwhile, in Group B, West Germany and Poland both managed to beat Yugoslavia and Sweden. The crucial game between the Germans and the Poles was goalless until the 76th minute, when Gerd Muller scored to send the hosts through 1–0. The Poles took third place after defeating Brazil 1–0.

The final was held on 7 July 1974 at Olympiastadion, Munich. West Germany was led by Franz Beckenbauer, while the Dutch had their star Johan Cruyff, and their Total Football system which had dazzled the competition. With just a minute gone on the clock, following a solo run, Cruyff was brought down by Uli Hoeneß close to the German penalty area, and the Dutch took the lead from the ensuing penalty by Johan Neeskens before any German player had even touched the ball. West Germany struggled to recover, and in the 26th minute were awarded a penalty, after Bernd Hölzenbein fell within the Dutch area, causing English referee Jack Taylor to award another controversial penalty. Paul Breitner spontaneously decided to kick, and scored. These two penalties were the first in a World Cup final. West Germany now pushed, and in the 43rd minute, in his typical style, Gerd Müller scored what turned out to be the winning goal, and the last of his career as he retired from the national team. The second half saw chances for both sides, with Müller putting the ball in the net for a goal that was disallowed as offside. In the 85th, Hölzenbein was fouled again, but no penalty this time. Eventually, West Germany, European Champions of 1972, also won the 1974 World Cup.

This was the only case of the reigning European champions winning the World Cup, until Spain (champions of the UEFA Euro 2008) defeated the Netherlands in the South Africa 2010 FIFA World Cup Final. France have also held both trophies, albeit in a different order, at the same time by winning the 1998 World Cup followed by Euro 2000.

Joao Havelange (former FIFA President from 1974 to 1998) claimed that the 1966 and 1974 World Cups were fixed so that England and Germany would win respectively.[1]

This was only the second time that a team had won the World Cup after losing a match in the Finals (West Germany losing to East Germany during the group stage). The previous occasion was West Germany's earlier win in 1954.

Poland's Grzegorz Lato led the tournament in scoring seven goals. Gerd Müller's goal in the final was the 14th in his career of two World Cups, beating Just Fontaine's record of 13, in his single World Cup. Müller's record was only surpassed 32 years later, in 2006 by Ronaldo's 15 goals from three World Cups and then 8 years after, in 2014 by Klose's 16 goals from four World Cups.

Günter Netzer, who came on as a substitute for West Germany during the defeat by the East Germans, was playing for Real Madrid at the time: this is the first time that a World Cup winner has played for a club outside his home country.

This is the last of four FIFA World Cup tournaments to date with no extra-time matches. The others are 1930, 1950, and 1962 tournaments.

The official mascots of this World Cup were Tip and Tap, two boys wearing an outfit similar to West Germany's, with the letters WM (Weltmeisterschaft, World Cup) and number 74. 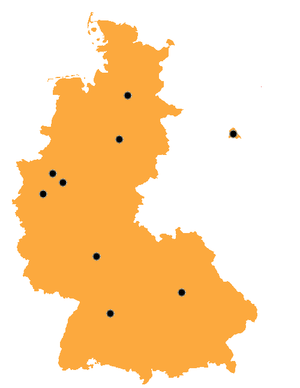 For a list of all squads that appeared in the final tournament, see 1974 FIFA World Cup squads.

It was agreed by a vote by the FIFA Organising Committee on who would be seeded.[2] There were four seeds, which would first be placed in separate groups:

Then the remaining spots in the groups were determined by dividing the participants into pots based on geographical sections.

Capello (No.8) is brought down v. Haiti 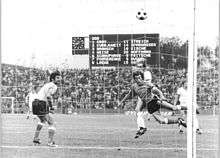 With seven goals, Grzegorz Lato is the top scorer in the tournament. In total, 97 goals were scored by 53 different players, with three of them credited as own goals.

In 1986, FIFA published a report that ranked all teams in each World Cup up to and including 1986, based on progress in the competition, overall results and quality of the opposition.[3][4] The rankings for the 1974 tournament were as follows: