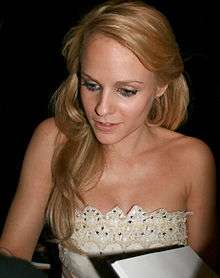 Weichselbraun at the Romy TV awards show in Vienna (2008)

Her first experience in broadcasting was with the regional radio station Antenne Tirol in 1999 and she first appeared in front of the camera in 2001 on the culture program Das Magazin on the channel TV Tirol.

In Germany, she has interviewed some of the most famous artists in the music business including Jon Bon Jovi and Nickelback.

She presented TRL Germany with Joko Winterscheidt (alternating with Patrice Bouédibéla and Karolin Oesterling) until April 2007.

Since 2003, next to her job on MTV, she has also been hosting the ZDF online-magazine for the game show Wetten, dass..?. In 2004 she has, together with Christian Clerici, hosted the live show Expedition Österreich (Expedition Austria), and one year later the Austrian preliminaries for the Eurovision Song Contest 2005, as well as the dancing show Dancing Stars with Alfons Haider on ORF. Her hosting of Dancing Stars earned her the Austrian Romy television award in 2006 and 2008.

In 2006, Weichselbraun and Wayne Carpendale presented the German version of Dancing on Ice on RTL, which made her very popular in Germany.[1] Other hosting jobs include the Life Ball, Kiddy Contest, The Dome and the Romy awards presentation in 2008 and 2013. In November 2010, she hosted the Hit Giganten on Sat.1 together with the German jazz musician Roger Cicero.

In addition to her job as a show host, Weichselbraun has also lent her voice to Jan Dress' audio drama Letzte Tage, jetzt (Last days, now) and worked as an actress. In 2007 she played in the ORF-movie Die Rosenkönigin and in one episode of the Die ProSieben Märchenstunde (Frau Holle - Im Himmel ist die Hölle los). In 2008 and 2009 she appeared in two more films: H3 - Halloween Horror Hostel and Hangtime - Kein leichtes Spiel (Hangtime - Not an easy game).

In 2009, she took the role of Sugar Kane in Peter Stones' musical Manche mögen's heiß (Some like it hot) at the Theater in der Josefstadt.

Since 2011, she hosted the Vienna Opera Ball together with Alfons Haider and Barbara Rett for the Austrian TV broadcaster ORF.

On 28 October 2014, Weichselbraun was announced as the host of the Austrian national final for the Eurovision Song Contest 2015,[2] which she also hosted alongside Alice Tumler and Arabella Kiesbauer at the Wiener Stadthalle in Vienna.[3]

Weichselbraun has a twin sister. Their parents married late, so each girl could choose her own surname. Melanie Binder took her father's name, while Mirjam Weichselbraun took her mother's. 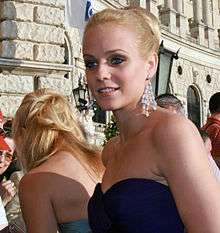