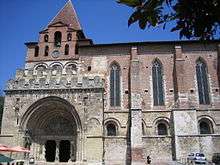 The Romanesque south door of the abbey church

The tympanum of the south-west portico

Moissac Abbey was a Benedictine and Cluniac monastery in Moissac, Tarn-et-Garonne in south-western France. A number of its medieval buildings survive including the abbey church, which has famous and important Romanesque sculpture around the entrance.

According to legend, Moissac abbey was founded by the Frankish king Clovis,[1] but historical records indicate that it was founded by Saint Didier, bishop of Cahors in the middle of the 7th century. The establishment of the monastery was difficult because of raids by Moors from the south and west and the Norsemen from the north.

The 11th and 12th centuries were the first golden age, as Moissac was affiliated to the abbey of Cluny and accepted the Cluniac Reforms, under the guidance of Durand de Bredons, both the Abbot of Moissac and the bishop of Toulouse. During this era the abbey was led by major abbots Dom Hunaud de Gavarret and Dom Ansquitil, who had the doorway and tympanum built.[1] In the 13th century, Raymond de Montpezat, followed by Bertrand de Montaigut, abbots and builders, ruled the abbey. Aymeric de Peyrac, writing his Chronicle in the 15th century in the castle of Saint Nicolas de la Grave, describes these times.

Illuminated manuscripts produced in the monastery's scriptorium, were taken to Paris by Jean-Baptiste Colbert in the 17th century.[1]

The 15th century ushered in a new golden age under the rule of abbots Pierre and Antoine de Caraman, whose building programme included in particular the Gothic part of the abbey church. The 1626 secularization of the abbey caused the Benedictine monks to leave the cloister, which had been a centre of Benedictine life for nearly 1000 years. They were replaced by Augustinian canons, under commendatory abbots including well-known cardinals such as Mazarin and de Brienne.

In 1793, the French Revolution put an end to monastic life in Moissac. The abbey church of St Pierre is relatively intact and is still an active church,[2] but the outlying buildings have suffered considerably. In the middle of the 19th century, the laying of a railway track threatened the cloister but it was saved (though the refectory was demolished to facilitate the railway cutting) and listed as a historic monument. Since 1998 the church and cloisters have had international protection as part of a World Heritage Site, Routes of Santiago de Compostela in France.[3]

Architectural features of interest include the church's south-west portico, a crenellated structure with sculpture that is a major masterpiece of Romanesque art. This reflected an expansion of image carving both in scope and size, and extended the use of sculpture from the sanctuary to the public exterior.[4]