Molteni was an Italian professional road bicycle racing team from 1958 until the end of 1976. It won 663 races, many of them earned by its most famous rider, Eddy Merckx. Other riders included Gianni Motta and Marino Basso, who contributed 48 and 34 wins respectively.[1] The Molteni family continues in cycling with sponsorship of Salmilano.

The sponsors Molteni were Italian salami manufacturers based in Arcore, near Milan.[2]

The Molteni team began in 1958 with Renato Molteni as team manager.[3] It was started by Pietro Molteni. The team was also managed by his son, Ambrogio Molteni, a former professional rider.[4] The former Italian road champion, Giorgio Albani, finished his career with Molteni in 1959 and came back two years later as directeur sportif.[5] The team had success with Gianni Motta in the 1966 Giro d'Italia and Michele Dancelli in the classics. Merckx joined at the end of 1970, having twice won the Tour de France and two editions of the Giro d'Italia. Molteni became predominantly Belgian and took many of Merckx's teammates from Faemino, including his directeur sportif, Guillaume Driessens.[6] Albani replaced Driessens and directed the team with Robert Lelangue during from 1972 to 1976. Other directeur sportifs included Marino Fontana. After 1976 Molteni retired from the peloton. 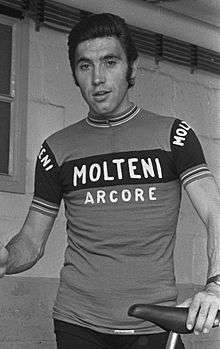