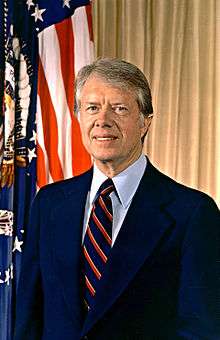 It is remembered as the speech where he compared the energy crisis with the "moral equivalent of war".

Carter gave 10 principles for the plan, but did not list specific actions. He said the goal was to reduce dependence on oil imports and "cut in half the portion of United States oil which is imported, from a potential level of 16 million barrels to six million barrels a day."

The phrase has become so well known, it is referenced in literature.[1][2] Carter used this phrase from the classic essay "The Moral Equivalent of War" derived from the speech given by American psychologist and philosopher William James, delivered at Stanford University in 1906, and subsequent book, published in 1910, in which "James considered one of the classic problems of politics: how to sustain political unity and civic virtue in the absence of war or a credible threat..." and "...sounds a rallying cry for service in the interests of the individual and the nation." Ideas mirrored in much of Carter's philosophy.[3] [4] [5]

In the news media, and following neither congressional action nor public mobilization,[6] Carter's "Moral Equivalent of War" speech and his energy recommendations became known by its biting acronym, MEOW.[7]

Carter noted that the energy crisis was likely to progressively worsen and could result in a national catastrophe. He cited the effort was the "moral equivalent of war".

He cited historical energy changes from wood to coal then oil. He foresaw the renewed use of coal and solar power. Our consumption of oil would keep going up every year. Our cars would continue to be too large and inefficient. Three-quarters of them would continue to carry only one person—the driver—while our public transportation system continues to decline. He predicted that by 1985, energy use would increase by 33 percent.

He predicted that $550 billion would be spent on imported oil by 1985, up from $37 billion at the time of the speech and $3.7 billion six year earlier.

--Reduce the annual growth rate in our energy demand to less than two percent.

--Reduce gasoline consumption by ten percent below its current level.

--Increase our coal production by about two thirds to more than 1 billion tons a year.

--Insulate 90 percent of American homes and all new buildings.

--Use solar energy in more than two and one-half million houses.

Those who insist on driving large, unnecessarily powerful cars must expect to pay more for that luxury.