This article is about the theological concept. For other uses, see Mortal Sin (disambiguation). 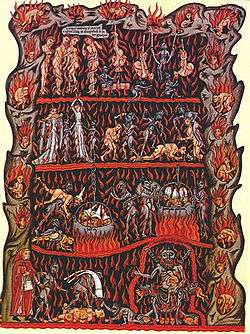 Mortal sins (Latin: peccata mortalia) in Catholic theology are wrongful acts that condemn a person to Hell after death if unforgiven. These sins are considered "mortal" because they constitute a rupture in a person's link to God's saving grace: the person's soul becomes "dead", not merely weakened. A mortal sin is not necessarily a sin that cannot be repented, unlike an eternal sin. Thus, even after a mortal sin has been committed, there is a chance for repentance. According to Catholic teaching, repentance and a firm resolution to sin no more (with at least imperfect contrition) restores the link to God's saving grace in the sacrament of penance; and restoration outside confession if the contrition is perfect. Perfect contrition arises from a love of God, who has been grievously offended by a sinful act.[1] When perfect contrition is the means by which one seeks to restore one's relationship with God, there must also be a resolution to confess mortal sins in confession (if possible), as soon as possible.[2] The verse from which the term "mortal" sin is derived likely comes from the 1 John 5:16-17.[3]

In Roman Catholic moral theology, a sin considered to be more severe or mortal is distinct from a venial sin and must meet all of the following conditions:

The Catechism of the Catholic Church defines grave matter as:

1858. Grave matter is specified by the Ten Commandments, corresponding to the answer of Jesus to the rich young man: "Do not kill, Do not commit adultery, Do not steal, Do not bear false witness, Do not defraud, Honor your father and your mother." The gravity of sins is more or less great: murder is graver than theft. One must also take into account who is wronged: violence against parents is in itself graver than violence against a stranger.[5]

With respect to a person's full knowledge of a certain act being a mortal sin, the Catholic Church teaches that "unintentional ignorance can diminish or even remove the imputability of a grave offense. But no one is deemed to be ignorant of the principles of the moral law, which are written in the conscience of every man. The promptings of feelings and passions can also diminish the voluntary and free character of the offense, as can external pressures or pathological disorders [mental illness]. Sin committed through malice, by deliberate choice of evil, is the gravest."[10] Furthermore, Catholic teaching also holds that "imputability and responsibility for an action can be diminished or even nullified by ignorance, inadvertence, duress, fear, habit, inordinate attachments, and other psychological or social factors."[11]

Mortal sins should not to be confused with the seven deadly sins. The latter are not necessarily mortal sins; they are sins that lead to other sins.

Mortal sins may also be called "grave", "grievous", or "serious" sins. Theological debate, however, exists, as to whether this seemingly synonymous term is appropriate, or whether it de facto introduces a third category of sins.

Mortal sins must be confessed by naming the kind of offence along with how many times it was committed.[12] It is not necessary to confess venial sins although they may be confessed. Venial sins are all sins that are not mortal. The Church encourages frequent use of the sacrament of confession even if a person has only venial sins.

Some acts cause automatic excommunication by the very deed itself e.g. renunciation of faith and religion, known as apostasy,[13] a person who desecrates the Eucharist[14] and "a person who procures a completed abortion".[15] Those mortal sins are so serious that the Church through law has made them crimes, like abortion or heresy, to make their gravity realized. The Church excommunicates also so sinners come to repentance quickly when they would not otherwise. Because commission of these offenses is so serious, the Church forbids the excommunicated from receiving any sacrament (not just the Eucharist) and also severely restricts the person's participation in other Church liturgical acts and offices. A repentant excommunicated person may talk to a priest, usually in a confessional, about their excommunication to arrange for the remission. Remission cannot be denied to someone who has truly repented their actions and has also made suitable reparation for damages and scandal or at least has seriously promised according to church law.[16][17] However, even if excommunicated, a Catholic who has not been juridically absolved is still, due to the irrevocable nature of baptism, a member of the Church in the sense that they are still considered members of the Catholic Church, albeit their communion with the Christ and the Church is gravely impaired. "Perpetual penalties cannot be imposed or declared by decree...."[18] However, "the following are expiatory penalties which can affect an offender either perpetually...."[19]

The Catholic teaching on mortal sin was called into question by some within the Church in the late 20th century after the Second Vatican Council. In response to these doubts, Pope John Paul II reaffirmed the basic teaching in his encyclical Veritatis Splendor. It is also maintained in the Catechism of the Catholic Church, which states: "Immediately after death the souls of those who die in a state of mortal sin descend into hell."[20] However, the Catechism does not by name say a specific person is in Hell, but it does say that "...our freedom has the power to make choices for ever, with no turning back."[21] Most significantly, the Catechism also proclaims that "There are no limits to the mercy of God...."[22] and that "...although we can judge that an act is in itself a grave offence, we must entrust judgment of persons to the justice and mercy of God."[21] We cannot see into their mind to know if it was deliberate or committed in full knowledge that it was a grave matter. Also, like the Parable of the Prodigal Son God forgives those who repent sincerely. Vatican II, in its Dogmatic Constitution Lumen Gentium, shows that mortal sin is still mortal sin although some people have tried to twist the writings.[23]

Eastern Catholic churches (autonomous, self-governing [in Latin, sui iuris] particular churches in full communion with the Bishop of Rome, the Pope), which derive their theology and spirituality from some of the same sources as the Eastern Orthodox and Oriental Orthodox, use the Latin Catholic distinction between mortal and venial sin, though they are not named mortal and venial. Similarly to the Eastern and Oriental Orthodox, the Eastern Catholic churches do not make a distinction between sins that are serious enough to bar one from receiving communion (and must be confessed before receiving once again) and those not sufficiently serious to do so.

The following are actions defined as constituting a grave matter, or are sins directly/indirected labelled grave, by the Catechism of the Catholic Church or like sources (such as declarations by the Congregation for the Doctrine of the Faith).

According to Fr. Allyne Smith, "While the Roman Catholic tradition has identified particular acts as 'mortal' sins, in the Orthodox tradition we see that only a sin for which we don't repent is 'mortal.'"[54]

In the Orthodox Church there are no "categories" of sin as found in the Christian West. In the pre-Vatican II Catholic catechism, sins were categorized as "mortal" and "venial." In this definition, a "mortal" sin was one which would prevent someone from entering heaven unless one confessed it before death... These categories do not exist in the Orthodox Church. Sin is sin. Concerning Confession, having a list of deadly sins could, in fact, become an obstacle to genuine repentance. For example, imagine that you commit a sin. You look on the list and do not find it listed. It would be very easy to take the attitude that, since it is not on a list of deadly sins, it is not too serious. Hence, you do not feel the need to seek God's forgiveness right away. A week passes and you have completely forgotten about what you had done. You never sought God's forgiveness; as a result, you did not receive it, either. We should go to Confession when we sin—at the very least, we should ask God to forgive us daily in our personal prayers. We should not see Confession as a time to confess only those sins which may be found on a list.[55]

Though not part of the dogma of the Orthodox Church the mortal/venial distinction is assumed by some Orthodox authors and saints as a theologoumenon. For example, Saint Ignatius Brianchaninov (1807–1867), in his book A Word on Death, in a chapter entitled "Mortal sin", says:

It has been said earlier that mortal sin of an Orthodox Christian, not being cured by repentance, submits him to eternal suffering; it has also been said that the unbelievers, Muslims, and other non-orthodox, even here are the possession of hell, and are deprived of any hope of salvation, being deprived of Christ, the only means of salvation. Mortal sins for Christians are the next: heresy, schism, blasphemy, apostasy, witchery, despair, suicide, fornication, adultery, unnatural carnal sins,* incest, drunkenness, sacrilege, murder, theft, robbery, and every cruel and brutal injury. Only one of these sins—suicide—cannot be healed by repentance, and every one of them slays the soul and makes the soul incapable of eternal bliss, until he/she cleans himself/herself with due repentance. If a man falls but once in any of these sins, he dies by soul: For whosoever shall keep the whole law, and yet offend in one, he is guilty of all. For he that said, Do not commit adultery, said also, Do not kill. Now if thou commit no adultery, yet if thou kill, thou art become a transgressor of the law. (James 2:10,11)

Similarly, the Exomologetarion of Nicodemus the Hagiorite[56] (1749–1809) distinguishes seven classes of sin:[57]

Nicodemus gives the following example for the seven classes of sin. "The initial movement of anger is pardonable; near to the pardonable is for someone to say harsh words and get hot-tempered. A non-mortal sin is to swear; near the non-mortal is for someone to strike with the hand. Between the non-mortal and the mortal is to strike with a small stick; near the mortal is to strike with a large stick, or with a knife, but not in the area of the head. A mortal sin is to murder. A similar pattern applies to the other sins. Wherefore, those sins nearer to the pardonable end are penanced lighter, while those nearer to the mortal end are more severely penanced."