Morwell is a town in the Latrobe Valley area of Gippsland, in eastern Victoria, Australia approximately 149 km (93 mi) east of Melbourne. The population at the 2011 Census was 13,691.[1]

It is both the seat of local government and administrative centre for the City of Latrobe. Morwell is central to the Latrobe Valley urban area which has a population of approximately 125,000 and as such has become home to many of the greater urban area's civic institutions, administrative functions and infrastructure.

The city is known for its role as a major energy production centre for Victoria as the centre of a major coal mining and fossil-fuel power generation industry. 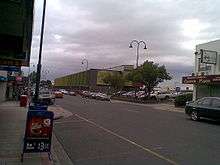 The earliest inhabitants of the Morwell district were the Gunai (sometimes spelled Kurnai) Indigenous Australians. Their first contact with Europeans would have been with pastoralists who came south from the Monaro region of New South Wales in the 1840s in search of pasture for their stock.

In 1841, McMillan and Strzelecki made journeys of exploration through the region which would later be named Gippsland and during the 1840s the squatting runs of Maryvale, Merton Rush and Hazelwood were taken up in the area which is now Morwell.

The name of the Morwell River is allegedly the anglicised form of the Aboriginal words more willie meaning woolly possum. In turn, this became the name for the public house by the river and the early settlement nearby.[2]

The 1870s were a time of railway building in Victoria. In 1873 the government approved the construction of a railway line from Melbourne to Sale and it was this decision which gave rise to the development of the township of Morwell. The railway station was approximately 3 miles from the settlement by the river, leading to new development occurring around the railway station.[2]

The first public sale of land in the town took place in January 1879 but there were at least ten traders operating in the town by that time, a Post Office in the township having been open since 1875 (an earlier PO having served the rural area from 1870 to 1873). On 1 January 1880 Morwell PO was renamed Morwell Bridge and Morwell Railway Station PO (open since 1877) became the main Morwell PO.[2][3]

A brickworks and a pottery were established in the 1880s, a butter factory was built in 1890 and a cordial factory.

Even in the 1880s, coal was seen to be of importance to Morwell. In 1888 two coal mining companies were established—The Great Morwell Coal Mining Company and the Maryvale Proprietary Coal Mining Company. Both these companies produced steam coal and were part of the industrial growth of the town which included timber getting, food processing (butter and cordial factories), brick and pottery manufacture and the transport of goods along the main railway line. Fires in the commercial area in 1890 and 1912 caused major damage to shops. This led to the formation of the Morwell Waterworks Trust and in December 1913 a town water supply from Billy's Creek was connected.

The development of the Yallourn open cut coal mine and power station in the 1920s contributed to Morwell's development, providing employment and trade.

Work on the Morwell power station and briquette works commenced in 1949 by the State Electricity Commission of Victoria (SECV), when field works on the Morwell open cut mine commenced, and briquette production equipment was ordered from Germany. It was originally known as the Morwell Power Station and is now known as Energy Brix. Production at the plant started in 1956, with the briquettes produced used for domestic and industrial use. As well as this a town gas production for Melbourne at an adjacent gasworks by the Gas and Fuel Corporation of Victoria was built.

The 1980s were a growth period for the township of Morwell. Schools were built to educate the children of families settling in the area.

A major Research and Development project into the conversion of brown coal into oil, (Brown Coal Liquefaction Victoria or BCLV) was established in Morwell in 1983/84. Funded by the Japanese Government at a cost of over one billion dollars this project established a 50 tonne per day pilot plant which ran until 1991. The project saw several hundred Japanese families move to the area and led to the establishment of a unique educational experiment in the form of a Japanese/Australian combined curriculum at the Commercial Road Primary School.

Thriving on the success of the power industry, Morwell developed into a city offering substantial housing and financial opportunities for its many residents. With the general growth of the Latrobe Valley, Morwell's success appeared destined to continue. However, the approval by the City of Morwell to build the Mid Valley Shopping Centre complex away from the CBD led to the decline of the CBD, with many empty shopfronts the result. Further, restructuring and privatisation of the State Electricity Commission in the 1990s led to massive job losses in the region, which accelerated the decline of Morwell's central business district. Many shops are now empty and in a state of disrepair.

Amalgamation of the local councils under a commission saw the major civic centre move to Traralgon. With the re-establishment of an elected council, the civic centre was moved back to Morwell and the new council building constructed in 2005 in the hope of leading to a revitalisation of the city centre. Unfortunately, that revitalisation failed to eventuate. The new justice precinct was completed in 2006 and has somewhat increased CBD activity as alleged criminals come to the Morwell justice precinct for processing through the Justice System.

Figures released by the Australian Bureau of Statistics in March 2011 show the average wage of Morwell residents to be the lowest of the three Latrobe Valley cities.[4]

Morwell is the headquarters of the Central Gippsland Institute of Technical and Further Education. It contains a major regional art gallery with an excellent local collection and is noted for its extensive rose gardens. Nearby at Churchill is the Gippsland Campus of Federation University. A commemorative bust of Lt Gen Sir Stanley Savige was erected in 2006. Born in Morwell, Savige founded Legacy Australia following World War 1 to assist widows and families of servicemen.

Morwell experiences an oceanic climate (Köppen climate classification Cfb). Nights in Morwell are about 2 °C colder than in Melbourne[5]

At local level, Morwell is governed by the City of Latrobe and is both the seat of local government and administrative centre. It is represented at local level by three wards - Rintoull in the city's centre; Tanjil, the north and west; and Firmin, the south. 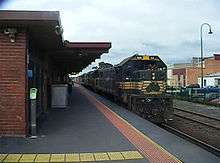 Road transport and the motor vehicle is the main form of transport. The Princes Freeway (A1) bypasses the town to the south while the old Princes Highway which once passed through east-west through its centre is now Princes Drive and Commercial Road. The highway connects Morwell with other Latrobe Valley cities including Moe to the west and Traralgon to the east. Other main roads include the Strzelecki Highway (B460) running south toward Leongatha.

Rail transport includes both passenger rail and freight rail. The city's only station is Morwell railway station which is on the Bairnsdale line.[9] Both the Traralgon V/Line rail service and the Bairnsdale V/Line rail service stop there with a two way hourly service. Travel time to Flinders Street Station ranges from approximately 109 minutes during peak travel times.[10]

Soccer is also popular. The LaTrobe City Stadium was home to the Gippsland Falcons, which competed in the National Soccer League until they disbanded in 2001, an offshoot club competes as the Falcons 2000 Gippsland Soccer League along with Fortuna 60 and Morwell Pegasus.

Cricket is also popular with two senior cricket clubs, Morwell and Latrobe, the latter of which Peter Siddle played for in his younger days.

The Morwell Cougars Baseball Club usually forms teams in three senior grades and all junior grades of the Latrobe Valley League. Their diamonds in Toners Lane are the only dedicated diamonds in the League.

American Football, also known as "Gridiron", is played at Maryvale Recreation Reserve. This is also the home of the local club Gippsland Gladiators which has been based there since 2010, competing in Division 2, of the Gridiron Victoria league.

There is also a 25-metre indoor swimming pool, used by the local swimming club for competitive swimming.

Golfers play at the course of the Morwell Golf Club on Fairway Drive.[11]