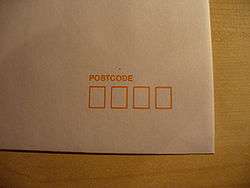 Australian postcodes have four digits; many envelopes for posting within Australia show this.

Australian envelopes and postcards often have four square boxes printed in orange at the bottom right for the postcode. These are used when addressing mail by hand.

Use of the Australian postcode system commenced in 1967, implemented by the Postmaster-General's Department (PMG), now called Australia Post. It replaced earlier postal sorting systems, such as Melbourne's letter and number codes (e.g., N3, E5) and a similar system once used in rural and regional New South Wales.

Australian postcodes consist of three or four digits, and are written after the name of the city, suburb, or town, and the state or territory:

When writing an address by hand, and a row of four boxes is pre-printed on the lower right hand corner of an envelope, the postcode may be written in the boxes.

If addressing a letter from outside Australia, the postcode is recorded before 'Australia'.

Australian postcodes are sorting information. They are often linked with one area (e.g. 6160 belongs only to Fremantle, Western Australia). But sometimes they can be quite complex, especially in country areas (e.g. 2570 belongs to twenty-two towns and suburbs around Camden, New South Wales). The south-western Victoria 3221 postcode of the Geelong Mail Centre also includes twenty places around Geelong with very few people. This means that mail for these places is not fully sorted until it gets to Geelong. Some postcodes cover large populations (e.g., postcode 4350 serving some 100,000 people in Toowoomba), while other postcodes have much smaller populations, even in urban areas. Australian postcodes range from 0200 for the Australian National University (now 2601) to 9944 for Cannonvale, Queensland.

Some towns and suburbs have two postcodes — one for street deliveries and one for post office boxes. For example, a street address in the Sydney suburb of Parramatta would be written like this:

But mail sent to a PO Box in Parramatta would be addressed:

Many big businesses, government departments and other institutions receiving large volumes of mail had their own postcode as a Large Volume Receiver (LVR), e.g. the Royal Brisbane and Women's Hospital has the postcode 4029, the Australian National University had the postcode 0200. More postcode ranges were made available for LVRs in the 1990s. Australia Post has been progressively discontinuing the LVR programme since 2006. Australian National University's postcode 0200 was the last LVR to be closed in September 2014. 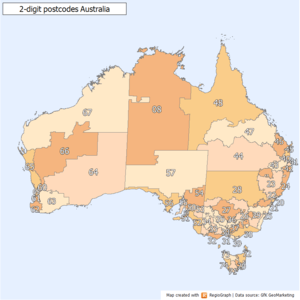 Sometimes near the state and territory borders, Australia Post finds it easier to send mail through a nearby post office that is across the border:

Jervis Bay Territory, once an exclave of the ACT but now a separate territory, is geographically located on the coast of NSW. It is just south of the towns of Vincentia and Huskisson, with which it shares a postcode. Mail to the Jervis Bay Territory is still addressed to the ACT.

Australia's external territories are also included in Australia Post's postcode system. While these territories do not belong to any state, they are addressed as such for mail sorting:

Each state's capital city ends with three zeroes, while territorial capital cities end with two zeroes. Capital city postcodes were the lowest postcodes in their state or territory range, before new ranges for LVRs and PO Boxes were made available. The last number can usually be changed from "0" to "1" to get the postcode for General Post Office boxes in any capital city (though Perth now uses a different range of postcodes for its GPO Boxes):

While the first number of a postcode usually shows the state or territory, the second number usually shows a region within the state. However, postcodes with the same second number are not always next to each other. As an example, postcodes in the range 2200–2299 are split between the southern suburbs of Sydney and the Central Coast of New South Wales.

Postcodes with a second number of "0" or "1" are almost always located within the metropolitan area of the state's capital city. Postcodes with higher second numbers are usually located in rural and regional areas. Common exceptions are where towns were rural when postcodes were first introduced in 1967, but have since been suburbanised and incorporated into metropolitan areas, e.g. Penrith, New South Wales has the postcode 2750 and Petrie, Queensland has the postcode 4502.

Within each region with the same second number, postcodes usually get bigger the further one travels from the state's capital city along major highways and railways. For instance, heading north on the North Coast railway in New South Wales away from Sydney:

Australia Post prefers envelopes sold in Australia to have four boxes in the bottom right corner of the front of the envelope. Entering the postcode in these boxes or squares, which Australia Post calls postcode squares, enables Australia Post to use optical character recognition (OCR) software in its mail sorting machines to automatically and more quickly sort mail into postcodes, which also embeds routing information. Postcode squares were introduced in 1990.

Australia Post says that postcode squares should not be used for machine-addressed mail, or mail going overseas.

Many other organisations now use postcodes. Insurance companies often use postcodes when working out the cost of car and house insurance. The NSW Ministry of Transport uses postcodes to give specific numbers for each bus stop in Greater Sydney. The stop number is five to seven numbers: the first four are the postcode, and the others show the bus stop (sometimes written with a space in between, e.g. "2000 108").

Many companies that produce metropolitan street maps also list the postcodes for each suburb, both in indexes and on the maps themselves. Spatial representation of postcodes is also very popular in defining sales and franchise territories.

Australian Bureau of Statistics, Australian Taxation Office and many other Federal and State government organisations publish a variety of statistics by postcode which extends the use Australia Post four digit code to many business and social planning related activities.

There is an inherent problem with spatial representation of postcodes since areas referenced to a specific postal code tend to change over time, as new postcodes are added or existing ones are split by Australia Post for operational purposes.[1]

Some mail generating software can automatically sort outward mail by postcode before it is generated. This pre-sort of mail into postcode order eliminates the need for it to be sorted manually or using mail sorting machines.

To improve mechanised sorting, each address now has a sorting number which is printed on the letter as an orange coloured barcode. This number might be 12 numbers long. This system enables the post office to place items in delivery order. Companies can also use Rapid Addressing Tool(RATS) to print Customer Addressed Barcodes, which are printed above the address. Every Delivery Point in Australia (DPID) has its own number. Barcode Sorter (BCS) machines sort and sequence letters up to C5 size. MARS sequences letters up to C5 articles. Flat multi-level OCR (FMOCR) Reads inprints and sorts C5 to A3 size articles.