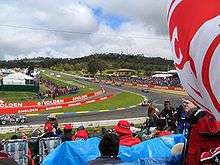 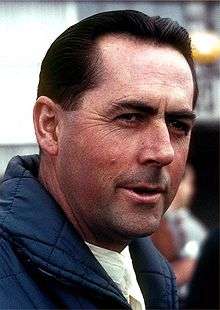 Jack Brabham is the most successful Australian driver in Formula One history. Brabham also set up his own team, the Brabham Racing Organisation, and won one of his world titles with them.

Motorsport is a popular spectator sport in Australia, although there are relatively few competitors compared to other sports due to the high costs of competing. The oldest motorsport competition in Australia is the Australian Grand Prix, first staged in 1928.

The most popular event is the F1 Australian Grand Prix at Albert Park in Melbourne. It is attended by more than 300,000 spectators per year & attracts free-to-air metropolitan television ratings, of over 1 million viewers. As well as big international viewerships.

The most widely watched motorsport is V8 Supercars, especially at the Bathurst 1000. Other classes in Australia include Australian GT, Formula 3 and Formula Ford (open wheel racing), Superbikes, as well as various forms (cars and bikes) of speedway racing.

The Australian Grand Prix has been run continuously (with the exception of 1936 and 1940-46 due to World War II) since 1928, though it would not be until 1985 that it became a round of the Formula One World Championship. For the first 10 years of F1, the Australian Grand Prix was held on the Adelaide Street Circuit in Adelaide, South Australia, as the last round of the championship. Adelaide played host to several title deciders; for example, the 1986 title, where Alain Prost successfully defended his championship after Nigel Mansell's left rear tyre exploded; the 1994 title was also decided in questionable circumstances, after Michael Schumacher collided with his rival Damon Hill, putting both out of the race and giving Schumacher the first of what would be a record seven Formula One World Drivers' Championships by a single point. In 1993 it was announced that from 1996 the Grand Prix would move to Melbourne at the Albert Park Circuit, replacing Adelaide as host.

Two Australians have won the World Driver's Championship: Jack Brabham, who won the title on three occasions, including becoming the first (and so far only) driver to win the World Championship in a car of his own design, manufacture and name when he won his final championship in 1966 driving the Repco V8 powered Brabham BT19 and BT20; and Alan Jones, who won in 1980, giving Williams its first Drivers' and Constructors championships. As of 2016, Daniel Ricciardo (Red Bull Racing) is the only Australian driver in Formula One. Of the 13 Australians who have driven in Formula One, only Brabham (14), Jones (12), Mark Webber (9) and Ricciardo (3) have won a Formula One Grand Prix.

Australia also hosted a round of the Champ Car World Series from 1991 to 2007. The Gold Coast Indy 300 has been held at the Surfers Paradise Street Circuit since 1991, with John Andretti, the nephew of Mario Andretti, winning the first event. Replacing the now defunct Champ Car series, the IndyCar Series held a non-points race in 2008. Will Power was the 2014 IndyCar Series champion and was also a three-time runner-up in the series, whilst Ryan Briscoe has also won multiple races.

Australia has hosted a round of the World Rally Championship from 1988 to 2006, the Rally Australia, including the final round of the championship in 2004 and 2005. Chris Atkinson has been competing in the WRC since 2006, with some promising results.

In 1987, Australia hosted two rounds of the inaugural World Touring Car Championship for Group A touring cars. These were the Bathurst 1000 at the Mount Panorama Circuit which was won by Australians Peter Brock (his 9th and last Bathurst 1000 victory), Peter McLeod and David Parsons driving a Holden Commodore.[1] The other round was a on-off 500 km race held on a combined road/oval course at the Calder Park Raceway in Melbourne.

The Sandown Raceway in Melbourne also hosted a round of the World Sportscar Championship in both 1984 and 1988. The 1984 race was won by West German driver Stefan Bellof and England's Derek Bell in a factory backed Porsche 956B while the 1988 event was won by Frenchman Jean-Louis Schlesser and West Germany's Jochen Mass in a Sauber-Mercedes.[2][3] Mark Webber was part of the team which won the 2015 FIA World Endurance Championship, alongside Germany's Timo Bernhard and New Zealander Brendon Hartley. Four Australian drivers have won arguably the world most prestigious motor racing event, the 24 Hours of Le Mans held on the Circuit de la Sarthe in France each June. They are Bernard Rubin (1928), Vern Schuppan (1983), Geoff Brabham (1993) and David Brabham (2009).[4]

Australia competed in the A1 Grand Prix championship from the series' establishment in 2005 until the end of its final season in 2009. Will Power was the most successful of the five drivers who have represented Team Australia to date, with a best result of second in the feature race at the series' inaugural round at Brands Hatch in 2005. Australia also hosted a round of the championship at Eastern Creek Raceway for the first three A1GP seasons.

Casey Stoner was the 2007 MotoGP World Champion. A round of the world series has been in Australia since 1989 and is held at the Phillip Island Grand Prix Circuit in October. The circuit also hosts a round of the World Superbike Championship. Australia has produced many top motorcycle riders with Stoner, Wayne Gardner, Troy Bayliss and Troy Corser all having won world championships in various classes, with five time 500cc world champion Mick Doohan regarded as one of the all-time greats.

Australia hosts a round of most major international series, including: