The Maputo Railway Station was designed by architects Alfredo Augusto Lisboa de Lima, Mario Veiga and Ferreira da Costa, and built between 1913 and 1916. Sometimes mistaken with the work of Gustave Eiffel 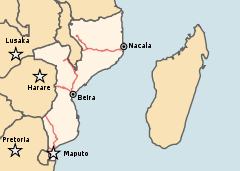 Portos e Caminhos de Ferro de Moçambique (abbreviated CFM; in English Mozambique Ports and Railways) is the parastatal authority that oversees the railway system of Mozambique and its connected ports.

The system developed over more than a century from three different ports at the Indian Ocean that serve as terminals for separate lines to the hinterland. The railroads were major targets during the Mozambican Civil War, were sabotaged by RENAMO, and are being rehabilitated. Management has been largely outsourced. At this time there is no directly interconnecting rail service between the three lines. Each line has its own development corridor.

In August 2010, Mozambique and Botswana signed a memorandum of understanding to develop a 1,100 km railway through Zimbabwe, to carry coal from Serule in Botswana to a deepwater port at Techobanine Point in Mozambique.[2]

Nacala is the terminal of the Nacala Railway, the most recent addition to the railway system. It connects the Nacala Development Corridor and links to the Central East African Railway (CEAR) of Malawi. The railway system is operated by Corredor de Desenvolvimento do Norte. Vale recently bought a stake in the operator; a link is planned from Moatize (where Vale has coal mines) to Malawi, hence connecting to the existing line to Nacala.[3]

Beira is the terminal of the Beira railroad, the oldest railway system of Mozambique. Its Machipanda line goes to Harare (formerly Salisbury) and was opened in 1899 as link to then Rhodesia, now Zimbabwe, and its transits. The Sena line of the Beira railroad connects to the coal fields of Moatize with the potential to link to the railway of Malawi as well as to Zambia. As the Beira Railroad Corporation (CCFB) the Beira railway is leased from CFM to the Indian RITES Ltd. and IRCON International consortium.

Maputo, formerly Lourenço Marques, and Matola are the terminals of the Maputo line that links to northeastern part of South Africa. Like the Ressano Garcia Railway Company, the Maputo line is managed by the NLBP (New Limpopo Bridge Project Investments) together with Transnet Freight Rail and CPM with the aim to rehabilitate and operate the line to the border of South Africa.[4] In South Africa the link goes to Komatipoort and further to Johannesburg. The Maputo line also links to Swazi Rail and the National Railways of Zimbabwe. 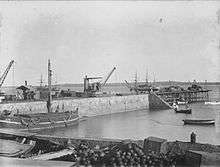 The port of Lourenço Marques in 1896

This article is issued from Wikipedia - version of the 12/25/2014. The text is available under the Creative Commons Attribution/Share Alike but additional terms may apply for the media files.