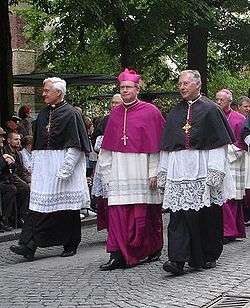 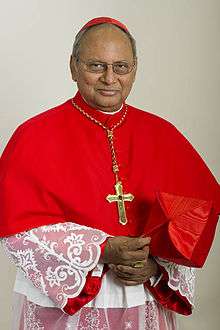 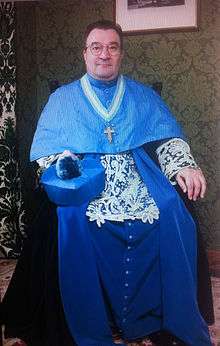 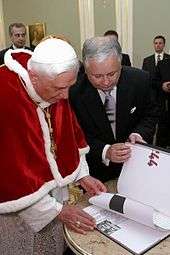 The mozzetta is a short elbow-length sartorial vestment, a cape that covers the shoulders and is buttoned over the frontal breast area. It is worn over the rochet or cotta as part of choir dress by some of the clergy of the Catholic Church, among them the pope, cardinals, bishops, abbots, canons and religious superiors. There used to be a small hood on the back of the mozzette of bishops and cardinals, but this was discontinued by Pope Paul VI. The hood, however, was retained in the mozzette of certain canons and abbots, and in that of the popes, often trimmed in satin, silk and or ermine material.

The colour of the mozzetta, which is always worn with a cassock and sometimes other choral vestments, represents the hierarchical rank of the person wearing it. Cardinals wear a scarlet mozzetta, while bishops and those with equivalent jurisdiction (e.g., apostolic administrators, vicars apostolic, exarchs, prefects apostolic, territorial prelates, and territorial abbots, if not bishops) wear a violet mozzetta. Rectors of basilicas and some canons wear a black mozzetta with red piping and buttons. The black mozzetta may be worn by priests who are rectors of parishes. Some religious orders have a mozzetta as part of their religious habit: the Canons Regular of the Austrian Congregation wear a violet mozzetta; their confreres in the Congregation of St. Maurice wear a red mozzetta; the Congregation of Holy Cross, the Canons Regular of the Immaculate Conception and the Lateran Canons wear a black mozzetta.

The winter mozzetta and the Paschal mozzetta fell into disuse during the pontificate of John Paul II (1978–2005), but their use was briefly restored by Pope Benedict XVI (2005–2013) before being discontinued again by Pope Francis. Benedict wore the winter mozzetta during the papal station at the image of the Madonna near the Spanish Steps that traditionally marks the beginning of Rome's winter season, and he wore it on all the occasions in the winter season where this garment was appropriate. The white mozzetta was reintroduced during the Octave of Easter in 2008. This change between winter and summer garments was very practical, given the oppressive heat of the Roman summer.[2]

On the evening of his election in 2013, Pope Francis did not wear the mozzetta, appearing on the balcony of St Peter's in a white papal soutane, surmounted by the pellegrina. He donned the broad scarlet papal stole only when bestowing the blessing urbi et orbi.

Not to be confused with the mozzetta, the pellegrina is a shoulder cape of elbow-length like the mozzetta but open in front, worn with the cassock, either fixed to it or detachable. It differs from the mozzetta also in not being associated with a cotta, surplice, or rochet.