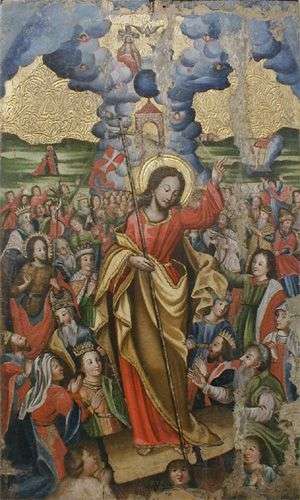 An icon of the Resurrection of Jesus Christ, which is celebrated throughout Eastertide 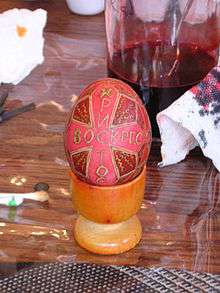 An Easter egg, which symbolizes the empty tomb, with the Paschal greeting "Christ is risen!"[1] 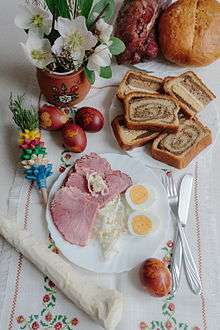 A Slovenian Easter breakfast with ham and nut roll is eaten before going to an Easter church service. The Easter lily, a symbol of the resurrection of Christ,[2] as well as red-coloured Easter eggs, symbolizing the blood of Christ shed for the sins of the world, also sit on the table.[1]

Eastertide (also called the Easter Season as well as Easter Time) or Paschaltide (also called the Paschal Season as well as Paschal Time) is a festal season in the liturgical year of Christianity that focuses on celebrating the Resurrection of Jesus Christ. It begins on Easter Sunday, which initiates Easter Week in Western Christianity, and Bright Week in Eastern Christianity.[3] There are several Eastertide customs across the Christian world, including sunrise services, exclaiming the Paschal greeting, clipping the church,[4] and decorating Easter eggs, a symbol of the empty tomb.[1][5][6] The Easter lily, a symbol of the resurrection,[2][7] traditionally decorates the chancel area of churches throughout Eastertide.[8] Other Eastertide customs include egg hunting, eating special Easter foods and watching Easter parades.[9][10]

Eastertide is the period of fifty days from Easter Sunday to Pentecost Sunday.[11]

Easter Sunday and Pentecost correspond to pre-existing Jewish feasts: The first day of Pesach (פסח) and the holiday of Shavu'ot (שבועות). In the Jewish tradition, the 49 days between these holidays are known as Counting of the Omer (ספירת העומר)‎.[14]

The first eight days constitute the Octave of Easter and are celebrated as solemnities of the Lord.[15]

Since 2000 the Second Sunday of Easter is also called Divine Mercy Sunday. The name "Low Sunday" for this Sunday, once common in English, is now rarely used.

The solemnity of the Ascension of the Lord is celebrated on the fortieth day of Eastertide (a Thursday), except in countries where it is not a Holy Day of Obligation. In such countries it is celebrated on the following Sunday (the forty-third day of Eastertide).[16] The nine days from that feast until the Saturday before Pentecost (inclusive) are days of preparation for the Holy Spirit the Paraclete,[17] which inspired the form of prayer called a novena.

When the Anglican and Lutheran churches implemented their own calendar and lectionary reforms in 1976, they adopted the same shortened definition of the Easter season as the Roman Catholic Church had promulgated six years earlier. In the Church of England, the Easter season begins with the Easter Vigil and ends after Evening Prayer (or Night Prayer) on the Day of Pentecost. Some Anglican provinces continue to label the Sundays between Easter and the Ascension "Sundays After Easter" rather than "Sundays of Easter"; others, such as the Church of England and ECUSA, use the term "Sundays of Easter".

Paschal Tide is a season of joy. The colour for the Office de tempore is white; the Te Deum and Gloria are recited every day even in the ferial Office. On Sundays the "Asperges" is replaced by the "Vidi Aquam" which recalls the solemn baptism of Easter eve. There is no feast day from Easter until Ascension. The Armenians during this period do away even with the abstinence on Fridays. Prayers are said standing, not kneeling. Instead of the "Angelus" the "Regina Caeli" is recited. From Easter to Ascension many churches, about the tenth century, said only one Nocturn at Matins; even some particular churches in the city of Rome adopted this custom from the Teutons (Bäumer, "Gesch. des Breviers", 312). Pope Gregory VII limited this privilege to the week of Easter and of Pentecost. Some dioceses in Germany however, retained it far into the nineteenth century for 40 days after Easter. In every Nocturn the three psalms are said under one antiphon. The Alleluia appears as an independent antiphon; an Alleluia is also added to all the antiphons, responsories and versicles, except to the versicles of the preces at Prime and Compline. Instead of the "suffragia sanctorum" in the semidouble and ferial Offices, a commemoration of the Holy Cross is used. The iambic hymns have a special Easter doxology.

The feasts of the holy Apostles and martyrs have their own commune from Easter to Pentecost. At Mass the Alleluia is added to the Introit, Offertory and Communion; in place of the Gradual two Alleluias are sung followed by two verses, each with an Alleluia; there is also a special Preface for Paschal Time.

Paschal Tide was the period during which every member of the faithful who has attained the year of discretion was bound by the positive law of the Church to receive Holy Communion (Easter duty). During the early Middle Ages from the time of the Synod of Agde (508), it was customary to receive Holy Communion at least three times a year—Christmas, Easter and Pentecost. A positive precept was issued by the Fourth Lateran Council (1215) and confirmed by the Council of Trent (Sess. XIII, can. ix). According to these decrees the faithful of either sex, after coming to the age of discretion, must receive at least at Easter the Sacrament of the Eucharist (unless by the advice of the parish priest they abstain for a while). Otherwise during life they are to be prevented from entering the church and when dead are to be denied Christian burial. The paschal precept is to be fulfilled in one's parish church.

In later centuries the time has been variously extended: at Naples from Palm Sunday to Ascension; at Palermo from Ash Wednesday to Low Sunday. In Germany, at an early date, the second Sunday after Easter terminated Paschal Tide, for which reason it was called "Predigerkirchweih", because the hard Easter labour was over, or "Buch Sunday", the obstinate sinners putting off the fulfillment of the precept to the last day. In the United States upon petition of the Fathers of the First Provincial Council of Baltimore Paschal Tide was extended by Pius VIII to the period from the first Sunday in Lent to Trinity Sunday (II Plen. Coun. Balt., n. 257); in Canada the duration of the Paschal Tide is the same as in the United States. In England it lasts from Ash Wednesday until Low Sunday; in Ireland from Ash Wednesday until the octave of SS. Peter and Paul, 6 July.[21]

This tide was called by the older liturgists "Quinquagesima paschalis" or "Quin. laetitiae". The octave of Easter which closes after Saturday has its own peculiar Office. Since this octave is part and complement of the Easter Solemnity, Paschal Tide in the liturgical books commences with the First Vespers of Low Sunday and ends before the First Vespers of Trinity Sunday. On Easter Sunday the Armenian Church keeps the Commemoration of All the Faithful Departed and on Saturday of Easter Week the Decollation of St. John. The Orthodox (Greek) Church celebrates on Friday of Easter Week the feast of Our Lady, the Living Fountain (shrine at Constantinople).

The Sundays from Easter to Ascension Day, besides being called the First, Second (etc.) Sunday after Easter, have their own peculiar titles.

The first is the "Dominica in albis", or Low Sunday. In the Dioceses of Portugal and Brazil (also in the ecclesiastical province of St. Louis, Mo.) on the Monday after Low Sunday is celebrated the feast of the Joys or Exultation of Mary at the Resurrection of her Son (double of the second class). The Russians, on Tuesday of this week, celebrating Radonitsa, go in procession to the cemeteries and place Easter eggs on the graves[22]

In the Latin Church the second Sunday is called from its Gospel the Sunday of the Good Shepherd and from the Introit "Misericordias Domini"; in many dioceses (Seville, also with the order of the Capuchins) it is called the feast of Our Lady Mother of the Good Shepherd (double second class); at Jerusalem and in the churches of the Franciscans it is called the feast of the Holy Sepulchre of Christ; in the Greek Church it is called ion myrophoron (Sunday of the women who brought ointments to the sepulchre of Christ); the Armenians celebrate on this Sunday the dedication of the first Christian church on Mount Sion.

The third Sunday is called from the Introit "Jubilate" and the Latin Church has assigned to it the feast of the Patronage of St. Joseph (double second class); the Greeks call it the Sunday of the Paralytic, from its Gospel.

The Oriental Churches on Wednesday after the third Sunday celebrate with a very solemn Office and an octave, the Mesopentekoste, the completion of the first half of Paschal Tide; it is the feast of the manifestation of the Messiah, the victory of Christ and the Church over Judaism ["Zeitschrift für katholische Theologie" (1895), 169-177]; the Slav nations in this day have a solemn procession and benediction of their rivers.[23] The fourth Sunday is called Cantate Sunday; by the Orientals it is called Sunday of the Samaritan Woman.

The fifth Sunday, "Vocem jucunditatis" in the Orient, Sunday of the Man Born Blind. In the Latin Church follow the Rogation Days; in the Greek Church on Tuesday is kept the apodosis or conclusion of the feast of Easter. The Greeks sing the Canons of Easter up to this Tuesday in the same manner as during Easter Week, whilst in the Latin Church the specific Easter Office terminates on Saturday following the feast. Thursday is the feast of the Ascension. The Friday of this week, in Germany, is called "Witterfreitag"; the fields are blessed against frost and thunderstorms.

Sunday within the octave of Ascension is called "Exaudi" from the Introit; in some dioceses it is called Feast of Our Lady, Queen of the Apostles (double major) or of the Cenacle (Charleston and Savannah, first class); in Rome it was called Sunday of the Roses ("Pascha rosarum" or "rosatum"), since in the Pantheon rose-leaves were thrown from the rotunda into the church; in the Greek and Russian Churches it is the feast of the 318 Fathers of the first Nicene Council; the Armenians call it the "second feast of the flowers", a repetition of Palm Sunday. By older liturgists the week before Pentecost is called "Hebdomada expectationis", week of the expectation of the Holy Ghost. On the Vigil of Pentecost the baptismal water is blessed in the Latin Church; in the Oriental Churches it this Saturday is the psychosabbaton (All Soul's Day); on this day the Greeks bless wheat cakes and have processions to the cemeteries. 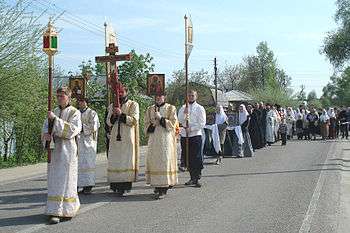 In the Eastern Orthodox Church, Pascha begins on Easter Sunday at Matins which is normally celebrated at midnight and continues for forty days through the ninth hour on the day before the Ascension.