Rendition of the coat of arms of Pope Pius IX with supporters: two angels, each holding a papal cross.

Statue of Pope Sylvester I depicted holding a ferula with a papal cross.

The papal cross is an emblem for the office of the Pope in ecclesiastical heraldry. It is depicted as a staff with three horizontal bars near the top, in diminishing order of length as the top is approached. The cross is thus analogous to the two-barred archiepiscopal cross used in heraldry to indicate an archbishop, and seems to have been used precisely to indicate an ecclesiastical rank still higher than that of archbishop. In the past, this design of the cross was often used in ecclesiastical heraldry as a distinctive mark of his office. It was often merely an artistic device, as use of a staff or crosier was not part of the traditional papal insignia.[1] However, at least one staff surmounted with a papal cross does exist.

The term "papal cross" may also refer to the ferula (from Latin ferula, "rod"), which is the pastoral staff or crosier used by the Pope. It is a rod with a knob on top surmounted by a single-barred cross. This is in contrast to other bishops, who use a crosier which is shaped like a shepherd's crook: bent or crooked at the top and pointed at the lower end. 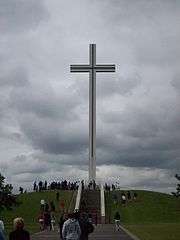 Various physical crosses have been called "papal crosses" because of their association with a pope. An example is the Papal Cross, a large white cross situated in the Phoenix Park, Dublin, Ireland. It was erected for the visit of Pope John Paul II on 29 September 1979. A congregation of over one million people attended an open-air mass at the cross during that visit. The white cross is 35 metres (115 ft) high and was built with steel girders

When he died on 2 April 2005, people gathered in tribute to Pope John Paul II at the Papal Cross, leaving flowers and other tokens of remembrance of him. It is likely to be the venue of a Papal mass during visit to Ireland by Pope Francis in 2018.