Music of Goa refers to music from the state of Goa, on the west coast of India. A wide variety of music genres are used in Goa ranging from Western art music to Indian classical music.[1] Konkani music is also popular across this tiny state. Being a former territory of Portugal, Goa has a dominant western musical scene with the use of instrument such as the violin, drums, guitar, trumpet and piano. It has also produced a number of prominent musicians and singers for the world of Indian music. Portuguese Fado also has significance in Goa.

Goa has produced many performers of Hindustani classical music, such as the vocalist Kesarbai Kerkar, Lata Mangeshkar and Asha Bhosle. Goan local bands are also known for their use of western music styles. Such bands are common at celebrations across the state.

Goa has become home to a style of Electronic music, the Trance music. It is popular at the Electronic music festivals hosted yearly in Goa that attract people from over 50 countries.

The traditional Goan musical instruments include dhol, mridanga, tabla, ghumat, dholak, kasale, madlem, shehnai, surt, tasso, nagado, and tambura. The ghumat is an earthen-ware pot-like vessel made by Goan potters with openings on the two opposite sides, one large and the other small in diameter, with the middle portion much bulging outwards. On the larger opening with the edge conveniently moulded for the fitting, a wet skin of a lizard (lacerta ocelata), known in Konkani as sap or gar, is fully stretched to cover the whole surface of the opening. The ghumat is essential for Hindu festivals, some temple rituals like Suvari vadan, bhivari and mando performances. A madlem is a cylindrical earthen vessel covered at both ends with the skin of a lizard and is mostly played by the Kunbis.

Being part of Portugal for over 450 years led to the introduction of the piano, mandolin and violin to Goa. Other instruments such as the drums, guitar and trumpet were also widely used. Schools in this period taught pupils at least one such instrument. It is said that Goans have music in their blood, a statement further strengthened by the role music and dance plays in Goan culture. Popular folk dances such as the Portuguese Corridinho are still part of Catholic weddings.

Konkani song may be classified in four groups: one which draws on the more pristine form in music and verse, as in the fugdi or the dhalo; the second which blends western and native music but retains Konkani lyrics as in deknnis; the third which blends native and western music as well as language as in dulpod; and the fourth which has a marked influence of western music and lyrics (in Konkani) with borrowed Portuguese words as in mando.

The Christian hymns and Hindu songs for the liturgy and popular devotions form an essential part of Goan daily life. It is common for passersby to hear people playing instruments in their houses during the evening hours.

Portuguese music and dance on cruise, Mandovi River in Panjim

Goa, a part of India since 1961, had been ruled from the early 16th century until the mid-19th century by Portugal and has closer connections with Western classical and popular music. Use of Portuguese music and other western music is popular specifically at most Catholic weddings and celebrations. Live bands are a celebratory feature at such weddings and are generally clubbed with a local Disc Jockey to allow for intervals to be covered also.

Another major attraction of the Goan music industry is the Tiatr derived from the Portuguese word 'teatro' meaning theater. It is a type of musical theatre still very popular with Goans, resident in Goa or Bombay as well as with expatriates and resident communities in the Middle East, London and other major western cities (where Konkani speakers have a considerable presence). The dramas are performed in the Roman Konkani dialects and include music, dancing and singing. Tiatr performers are called tiatrists. Songs integral to the plays are known as 'Kants'. Other songs, called kantaram are generally either comedic or based on topical, political and controversial issues that are interspersed through the performance. These musical interludes are independent of the main theme of the play. The songs are often satirical and unsparing of the politics and politicians of Goa. The music is provided by a live band including keyboard, trumpet, saxophone, bass guitar and drums. This century old theater industry in Goa still remains independent of government control and efforts to bring it under such control have met massive opposition from locals for fear of government regulation over content of political nature.[3]

The Goa Symphony Orchestra and Goa Philharmonic Choir were founded by Lourdino Barreto.[4]

Goa has a rich heritage of Konkani liturgical music and hymns. The standard hymnal of the Archdiocese of Goa and Daman is called Gaionancho Jhelo (Garland of hymns) and the diocese also brings out a periodical sheet music publication of Konkani liturgical hymns a called Devacheam Bhurgeanchim Gitam (Songs of God's children). As with the liturgy, the entire music of the Catholic church in Goa is in the Latin script. 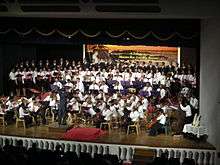 Churches across Goa always maintain choirs. Like most Catholic churches worldwide, there are separate choirs for adults and children. Some historically significant seminaries also maintain choirs of their own. A notable one is the all male seminarians of the Santa Cecilia Choir (Coro di Santa Cecilia), part of the over 400 year old Rachol seminary (Seminário de Rachol) of Goa. The choir has also been known to use a 16th-century restored pipe organ for its concerts. Most of the centuries-old churches in Goa feature these pipe organs, but few are known to use them now because of their upkeep. However, they still form part of the churches interior decor and in almost all instances are located in the nave above the main entrances facing the altar in the far end below.

In the area of Western music, there are several pop stars, among them Remo Fernandes (born 1953). Goan popular music is generally sung in the Konkani language and English language. Another contributor to Goan music is the Canadian-Goan band Goa Amigos, which has represented Goa at the largest South Asian festival in North America.

Goa has become a home for electronic music, especially a style called Goa trance. This genre began its evolution in the late 1960s, when hippies from the United States, United Kingdom and elsewhere turned Goa into a tourist destination. When tourism began to die out, a number of devotees stayed in the area, pursuing a specific style of trance music. Early pioneers included Mark Allen, Goa Gil and Fred Disko.

Goa Trance (sometimes referred to as Goa or by the number 604) is a form of electronic music that developed around the same time as Trance music became popular in Europe. It originated during the late 1980s and early 1990s in the Indian state of Goa. Essentially, Trance music was pop culture's answer to the Goa Trance music scene on the beaches of Goa where the traveler's music scene has been famous since the time of the Beatles. Goa Trance enjoyed the greater part of its success from around 1994 -1998, and since then has dwindled significantly both in production and consumption, being replaced by its successor, Psychedelic Trance (also known as psytrance). Many of the original Goa Trance artists: Hallucinogen, Slinky Wizard, and Total Eclipse are still making music, but refer to their style of music simply as "PSY". TIP Records, Flying Rhino Records, Dragonfly Records, Transient Records, Phantasm Records, Symbiosis Records, Blue Room Released were all key players on the beach and in the scene.

Goa Trance is closely related to the emergence of Psytrance during the latter half of the 1990s and early 2000s, where the two genres mixed together. In popular culture, the distinction between the two genres often remains largely a matter of opinion (they are considered by some to be synonymous; others say that Psytrance is more "psychedelic/cybernetic" and that Goa Trance is more "organic", and still others maintain that there is a clear difference between the two). If anything, the styles are easier to differentiate in Central and Eastern Europe (e.g. Austria, Hungary, Romania) where Goa Trance parties are more popular than Psy-Trance parties - the opposite being true in the UK, Belgium and Germany. Psy Trance has a noticeably more aggressive bass line and Goa tends to avoid the triplet-style bass lines. Between them however, both psy- and Goa trance are sonically distinct from other forms of trance in both tonal quality, structure and feel. In many countries they are generally more underground and less commercial than other forms of trance, except for Brazil and Israel, which since the year of 2000 it became both countries most popular type of music for the general party scene. Top DJ's from the UK and other parts of Western Europe fly to Goa for special parties, often on the beaches or in rice paddies. "Shorebar" at Anjuna Beach in Northern Goa is traditionally seen as the birthplace and center of the Goan trance scene.