Trance is a genre of electronic dance music that developed during the 1990s in Germany. It is characterized by a tempo lying between 125 and 150 beats per minute (BPM),[5] repeating melodic phrases,[5] and a musical form that distinctly builds tension and elements throughout a track often culminating in 1 to 2 "peaks" or "drops."[5] Although trance is a genre of its own, it liberally incorporates influences from other musical styles such as techno,[3] house,[1] pop,[3] chill-out,[3] classical music,[3][4] tech house, ambient, and film music.[4]

A trance refers to a state of hypnotism and heightened consciousness. This is portrayed in trance music by the mixing of layers with distinctly foreshadowed build-up and release. A characteristic of virtually all trance music is a mid-song climax followed by a soft breakdown disposing of beats and percussion entirely,[3][5] and leaving the melody and/or atmospherics to stand alone for an extended period before gradually building up again. As a result, trance tracks are often lengthy to allow for this progression and have sufficiently sparse opening and closing sections to facilitate mixing by DJs.

Trance can be purely instrumental, although vocals are also a common feature. Typically they are performed by mezzo-soprano to soprano female soloists, often without verse/chorus structure. Structured vocal form in trance music forms the basis of the vocal trance subgenre, which has been described as "grand, soaring, and operatic" and "ethereal female leads floating amongst the synths".[8][9] 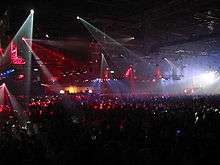 The trance name may refer to an induced emotional feeling, high, euphoria, chills, or uplifting rush that listeners claim to experience, or it may indicate an actual trance-like state the earliest forms of this music attempted to emulate in the 1990s before the genre's focus changed.[5]

Some trace Trance's antecedents back to Klaus Schulze, a German experimental electronic music artist who concentrated in mixing minimalist music repetitive rhythms and arpeggiated sounds (specifically his 1988 album "En=Trance". In truth it was really Sven Väth, his labels and others in the same group that saw the initial releases of trance Another possible antecedent is Yuzo Koshiro and Motohiro Kawashima's electronic soundtracks for the Streets of Rage series of video games from 1991 to 1994, and the Wangan Midnight Maximum Tune series.[10][11][12][13] It was promoted by the well-known UK club-night megatripolis (London, Heaven, Thursdays) whose scene catapulted it to international fame.

One writer traces the roots of trance to Paul van Dyk's 1993 remix of Humate's "Love Stimulation".[1] However, van Dyk's trance origins can be traced further back to his work with Visions Of Shiva, which were his first ever tracks to be released. In subsequent years, one genre, vocal trance, arose as the combination of progressive elements and pop music,[3] and the development of another subgenre, epic trance, had some of its origins in classical music.,[3] with film music also being influential.[4] 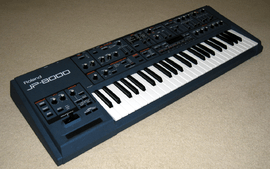 Roland JP-8000, a synthesizer famous for its incorporation of the supersaw waveform

Classic trance employs a 4/4 time signature,[5] a tempo of 125 to 150 BPM,[5] and 32 beat phrases and is somewhat faster than house music.[16] A kick drum is usually placed on every downbeat and a regular open hi-hat is often placed on the upbeat or every 1/8th division of the bar.[5] Extra percussive elements are usually added, and major transitions, builds or climaxes are often foreshadowed by lengthy "snare rolls"—a quick succession of snare drum hits that build in velocity, frequency, and volume towards the end of a measure or phrase.[5]

A trancegate pattern at 141 bpm as it is heard on a software trancegate. The gated pattern gradually changes, to hear the various rhythms possible with a trance gate. Note that some trancegate patterns are off-beat. (A Roland JP-8000 with the supersaw waveform is used. Minor EQ edits are made).

Rapid arpeggios and minor keys are common features of Trance, the latter being almost universal. Trance tracks often use one central "hook", or melody, which runs through almost the entire song, repeating at intervals anywhere between 2 beats and 32 bars, in addition to harmonies and motifs in different timbres from the central melody.[5] Instruments are added or removed every 4, 8, 16, or 32 bars.[5]

In the section before the breakdown, the lead motif is often introduced in a sliced up and simplified form,[5] to give the audience a "taste" of what they will hear after the breakdown.[5] Then later, the final climax is usually "a culmination of the first part of the track mixed with the main melodic reprise".[5]

As is the case with many dance music tracks, trance tracks are usually built with sparser intros ("mix-ins") and outros ("mix-outs") in order to enable DJs to blend them together immediately.[3][5] As trance is more melodic and harmonic than other electronic dance music, the construction of trance tracks in the proper way is particularly important in order to avoid dissonant (or "key clashing," i.e., out of tune with one another) mixes.

More recent forms of trance music incorporate other styles and elements of electronic music such as electro and progressive house into its production. It emphasizes harsher basslines and drum beats which decrease the importance of offbeats and focus primarily on a four on the floor stylistic house drum pattern. The bpm of more recent styles tends to be on par with house music at 120 - 135 beats per minute. However, unlike house music, recent forms of trance stay true to their melodic breakdowns and longer transitions.[17]

Trance music is broken into a large number of subgenres. Chronologically, the major subgenres are classic trance, acid trance, progressive trance,[3] uplifting trance,[3] and hard trance. Uplifting trance is also known as "anthem trance", "epic trance",[3] "commercial trance", "stadium trance", or "euphoric trance",[5] and has been strongly influenced by classical music in the 1990s[3] and 2000s by leading artists such as Ferry Corsten, Armin Van Buuren, Tiesto, Push, Rank 1 and at present with the development of the subgenre "orchestral uplifting trance" or "uplifting trance with symphonic orchestra" by such artists as Andy Blueman, Ciro Visone, Soundlift, Arctic Moon, Sergey Nevone&Simon O'Shine etc. Closely related to Uplifting Trance is Euro-trance, which has become a general term for a wide variety of highly commercialized European dance music. Several subgenres are crossovers with other major genres of electronic music. For instance, Tech trance is a mixture of trance and techno, and Vocal trance "combines [trance's] progressive elements with pop music".[3] Balearic beat, which is associated with the laid back vacation lifestyle of Ibiza, Spain, is often called "Balearic trance", as espoused by Roger Shah. The dream trance genre originated in the mid-1990s, with its popularity then led by Robert Miles. There is also a slower bpm trance music, this styles are often called "psybient" (synonyms are "psychill", "ambient trance").

AllMusic states on progressive trance: "the progressive wing of the trance crowd led directly to a more commercial, chart-oriented sound, since trance had never enjoyed much chart action in the first place. Emphasizing the smoother sound of Eurodance or house (and occasionally more reminiscent of Jean-Michel Jarre than Basement Jaxx), Progressive Trance became the sound of the world's dance floors by the end of the millennium. Critics ridiculed its focus on predictable breakdowns and relative lack of skill to beat-mix, but progressive trance was caned by the hottest DJ."[18]

The following is an incomplete list of dance music festivals that showcase trance music.

Notes:' Sunburn was not the first festival/event to specialize in India in trance music much earlier pioneers of Goa parties[19] held events as early as the late 80's and through all of the 1990s[20] 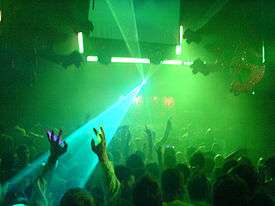 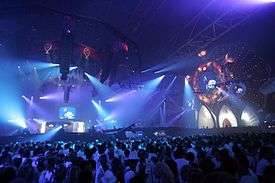