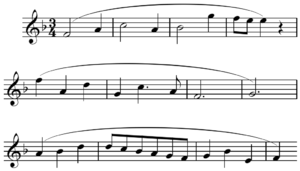 In music and music theory, phrase and phrasing are concepts and practices related to grouping consecutive melodic notes, both in their composition and performance. A musical work is typically made up of a melody that consists of numerous consecutive phrases. The notation used is similar to a tie and a slur. Even when no phrase markings are included in the notation, experienced instrumentalists and singers will add phrasing to melodic lines.

A musical phrase (Greek: φράση "sentence, expression"; see also strophe) is a unit of musical meter that has a complete musical sense of its own,[6] built from figures, motifs, and cells and combining to form melodies, periods and larger sections;[7] or the length in which a singer or instrumentalist can play in one breath.

The terms, like sentence, verse etc., have been adopted into the vocabulary of music from linguistic syntax.[8] Though the analogy between the musical and the linguistic phrase is often made, still the term "is one of the most ambiguous in music....there is no consistency in applying these terms nor can there be...only with melodies of a very simple type, especially those of some dances, can the terms be used with some consistency."[9]

John D. White defines a phrase as, "the smallest musical unit that conveys a more or less complete musical thought. Phrases vary in length and are terminated at a point of full or partial repose, which is called a cadence."[10] Edward Cone analyses the "typical musical phrase" as consisting of an "initial downbeat, a period of motion, and a point of arrival marked by a cadential downbeat".[11] Charles Burkhart defines a phrase as "Any group of measures (including a group of one, or possibly even a fraction of one) that has some degree of structural completeness. What counts is the sense of completeness we hear in the pitches not the notation on the page. To be complete such a group must have an ending of some kind … . Phrases are delineated by the tonal functions of pitch. They are not created by slur or by legato performance … . A phrase is not pitches only but also has a rhythmic dimension, and further, each phrase in a work contributes to that work's large rhythmic organization."[12]

In common practice phrases are often four bars or measures long[13] culminating in a more or less definite cadence.[14] A phrase will end with a weaker or stronger cadence, depending on whether it is an antecedent phrase or a consequent phrase, the first or second half of a period. However, the absolute span of the phrase (the term in today's use is coined by the German theorist Hugo Riemann[15]) is as contestable as its pendant in language, where there can be even one-word-phrases (like "Stop!" or "Hi!"). Thus no strict line can be drawn between the terms of the 'phrase', the 'motiv' or even the separate tone (as a one-tone-, one-chord- or one-noise-expression).

Thus, in views of the Gestalt theory the term of the phrase is rather enveloping any musical expression which is perceived as a consistent gestalt separate from others, however few or many beats, i. e. distinct musical events like tones, chords or noises, it may contain.

A phrase-group is, "a group of three or more phrases linked together without the two-part feeling of a period," or, "a pair of consecutive phrases in which the first is a repetition of the second or in which, for whatever reason, the antecedent-consequent relationship is absent."[16]

Phrase rhythm is the rhythmic aspect of phrase construction and the relationships between phrases, and "is not at all a cut-and-dried affair, but the very lifeblood of music and capable of infinite variety. Discovering a work's phrase rhythm is a gateway to its understanding and to effective performance." The term was popularized by William Rothstein's Phrase Rhythm in Tonal Music. Techniques include overlap, lead-in, extension, expansion, reinterpretation and elision.

Phrase consisting of two phrase members in Haydn's Trio no. 1 in G Major[17]

A phrase member is one of the parts in a phrase separated into two by a pause or long note value, the second of which may repeat, sequence, or contrast with the first.[17]

The act of interpreting a notated phrase during performance is called musical phrasing and considered an art. 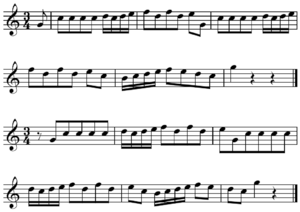 play with percussion marking the measures .

Phrasing refers to an expressive shaping of music, and relates to the shaping of notes in time, tone colour, dynamics, and other variables. Phrasing relates to the manner of playing the individual notes of a particular group of consecutive notes and the way they are weighted and shaped relative to one another. It does not refer solely to the idealized note values/durations as represented in sheet music, but to the multitude of deviations that the performer needs to make from sheet music if it is to be expressive in a particular style and culturally aware. An example may be an acceleration of a group of notes, but there are many more. A sequence of notes could also be slowed down (ritardando). This shaping of notes is creatively performed by the musician or singer with the aim of expressing (feelings), and can be distinguished by the listener.

Being an expressive activity of creative musicians, the question of how to shape a group of notes cannot be (and is not) exactly specified. Giuseppe Cambini had this to say about violin playing:

The bow can express the affections of the soul: but besides there being no signs that indicate them, such signs, even were one to invent them, would become so numerous that the music, already too full of indications, would become a formless mass to the eyes, almost impossible to decipher. I should consider myself fortunate if I could only get a student to hear, through a small number of examples, the difference between bad and mediocre, mediocre and good, and good and excellent, in the diversity of expressions that one may give to the same passage.[19]
— "Nouvelle Méthode théorique et pratique pour le violon". Paris, Naderman (c. 1803). by Giuseppe Cambini

Usually, the shaping of notes in time is such that meaning ("affections of the soul") is expressed. In general, particular musical thoughts appear in a group of notes following each other, forming a phrase: a particular part of a melody. These notes belong together and the melodic phrase is then shaped expressively: tension can be built up by accelerating; particular expressive pivot points or emphasis can shaped by holding notes longer (fermata); slowing down can be used to end phrases; rubato, etc.

Phrasing is sometimes also taken to include aspects of musical shaping, other than the timing of melodies, such as articulation and dynamics, etc.

It can also be influenced by lyrics on the song in relation to the piece of musical phrase in sheet music.

Intuitive versus analytical approach to phrase/phrasing

There are two ways/manners in which phrase/phrasing can be approached: intuitive, or analytical.

There are two schools of thought on phrasing, one more intuitive, the other more analytical. The intuitive school uses a verbal model, equating the function of phrasing with that of punctuation in language. Thus, said Chopin to a student, "he who phrases incorrectly is like a man who does not understand the language he speaks."
— Nancy Toff[20]

The question how far the analytical and critical study of a work of art aids or hinders the appreciation of its more emotional and spiritual factors is one that has been asked over and over[...]
— Stewart Macpherson[21]

The reliance on the score for information about temporal structures reflects a more profound analytical difficulty. Structural information gleaned from the score is visually apprehended and as such is predisposed to visualist models of structure. These models are premised on symmetry and balance and on a timeless notion of "objective" structure. [...] Temporal and aurally-apprehended structures are denied reality because they cannot be said to "exist" in the way that spatial and visually apprehended structures do. [...] Musical investigations exhibit the Western prejudice toward visualism in the dependence on visual symmetry and balance. Information about structure from listening experience is suspect because it is considered "subjective" and is opposed to "objective" information from the score.
— F. Joseph Smith[22]