This article is about the flowering plants of the genus Tropaeolum, commonly called nasturtiums. For the genus of watercresses, see Nasturtium (genus).

Tropaeolum /trəˈpiːələm, troʊ-/,[1][2] commonly known as nasturtium (/nəˈstɜːrʃəm, næ-/;[3][4][5] literally "nose-twister" or "nose-tweaker"), is a genus of roughly 80 species of annual and perennial herbaceous flowering plants. It was named by Carl Linnaeus in his book, Species Plantarum,[6] and is the only genus in the family Tropaeolaceae. The nasturtiums received their common name because they produce an oil that is similar to that of watercress (Nasturtium officinale).

The genus Tropaeolum, native to South and Central America, includes several very popular garden plants, the most commonly grown being T. majus, T. peregrinum and T. speciosum. One of the hardiest species is T. polyphyllum from Chile, the perennial roots of which can survive the winter underground at altitudes of 3,300 metres (10,000 ft).

Plants in this genus have showy, often intensely bright flowers, and rounded, peltate (shield-shaped) leaves with the petiole in the centre. The flowers are bisexual and zygomorphic, with five petals, a superior three-carpelled ovary, and a funnel-shaped nectar spur at the back, formed by modification of one of the five sepals.[7]

The first Tropaeolum species was imported into Spain by the Spanish botanist Nicolás Monardes. He published an account in 1569 entitled Joyful News out of the Newe Founde Worlde in which he described, among other things, the plants and animals discovered in South America.[8] The English herbalist John Gerard reports having received seeds of the plant from Europe in his 1597 book Herball, or Generall Historie of Plantes.[9] Tropaeolum majus was named by the Swedish botanist Carl Linnaeus, who chose the genus name because the plant reminded him of an ancient custom. After victory in battle, the Romans used to set up a trophy pole called a tropaeum (from the Greek tropaion, source of English "trophy"). On this the armour and weapons of the vanquished foe were hung. Linnaeus was reminded of this by the plant as the round leaves resembled shields and the flowers, blood-stained helmets.[10]

Nasturtiums were once known commonly as "Indian cresses" because they were introduced from the Americas, known popularly then as the Indies, and used like cress as salad ingredients. John Gerard called the plant "Indian Cresses" in his herbal. He wrote: "unto the backe part (of the flower) doth hange a taile or spurre, such as hath the Larkes heele, called in Latine Consolida regalis.[9] He was comparing the flowers of Indian cress to those of forking larkspur (Consolida regalis) of the buttercup family.[10] J R R Tolkien commented that an alternative anglicization of the name was "nasturtian" rather than "nasturtium".[11]

Tropaeolum is a genus of dicotyledonous annual or perennial plants, often with somewhat succulent stems and sometimes tuberous roots. The alternate leaves are hairless, peltate and entire or palmately lobed. The petioles or leaf stalks are long and in many species are able to twine round other stems to provide support. The flowers are bisexual and showy, set singly on long stalks in the axils of the leaves. They have five sepals, the uppermost of which is elongated into a nectar spur. The five petals are clawed, with the lower three unlike the upper two. The eight stamens are in two whorls of unequal length and the superior ovary has three segments and three stigmas on a single style. The fruit is naked and nut-like, with three single seed segments.[12][13] 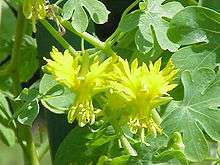 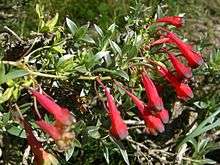 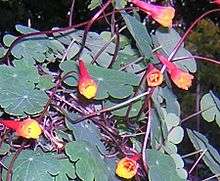 The most common flower in cultivation is a hybrid of T. majus, T. minus and T. peltophorum, and is commonly known as the nasturtium (and occasionally anglicized as nasturtian). It is mostly grown from seed as a half-hardy annual and both single and double varieties are available. It comes in a range of forms and colours including cream, yellow, orange and red, solid in colour or striped and often with a dark blotch at the base of the petals. It is vigorous and easily grown and does well in sun. It thrives in poor soil and dry conditions, whereas in rich soil it tends to produce much leafy growth and few flowers. Some varieties adopt a bush form while others scramble over and through other plants and are useful for planting in awkward spots or for covering fences and trellises.[14]

The following cultivars have gained the Royal Horticultural Society's Award of Garden Merit:

The blue nasturtium (Tropaeolum azureum) is a tender species from Chile which has violet-blue flowers with white eyes that can be as much as 4 cm (1.6 in) across.[18]

Tropaeolum brachyceras has 2.5 cm (1 in) yellow flowers with purplish markings on wiry, climbing stems. It is a half hardy perennial from Chile and may remain dormant for several years before being sparked into growth by some unknown trigger factor.[18]

Tropaeolum hookerianum is a tuberous-rooted species from Chile. There are two subspecies, T. h. austropurpureum which has violet-purple flowers and T. h. pilosum with yellow flowers.[18]

The Canary creeper (Tropaeolum peregrinum) is a trailing and climbing half-hardy annual species with wiry stalks and palmately lobed leaves. The pale yellow, fringed flowers are borne on long stalks. It originated from Peru but may first have been cultivated in the Canary Islands before being introduced into Western Europe.[10]

Wreath nasturtium (Tropaeolum polyphyllum) is a prostrate plant originating from Argentina and Chile. It has silvery, deeply lobed leaves and a profusion of small, bright yellow flowers on long trailing stalks. After flowering, the plant dies back. It is a perennial with underground rhizomes which send up new shoots at intervals. In a suitable sunny location with well drained soil, it will survive for several years.[10] It is a very hardy species; the tubers can grow at depths of 60 cm (24 in) enabling the plant to survive at altitudes of as much as 3,300 metres (10,000 ft) in the Andes.[19]

The flame flower (Tropaeolum speciosum) is well adapted to cool, moist climates and famously does well in Scotland. It sends up shoots which thread their way through hedges and shrubs and which, when they emerge into the light, bear brilliant red flowers among small, five or six-lobed leaves. It is difficult to establish but is an attractive garden plant when it thrives.[10] This plant has gained the Royal Horticultural Society's Award of Garden Merit.[20]

Three-coloured Indian cress (Tropaeolum tricolor) is another tuberous, climbing species grown for its attractive red, purple and yellow tubular flowers. It comes from Chile and Bolivia and is a reliable winter-growing species.[18]

Mashua (Tropaeolum tuberosum) is a perennial climbing plant from the Andes grown for its tuberous roots. It has been cultivated since ancient times and depictions of it are found at archaeological sites pre-dating the Incas. It has leaves with five to seven lobes and small, long-spurred, red and yellow flowers. The tubers have an unpleasant smell when raw which disappears on cooking. It is frost-hardy and produces crops of 30 tons per hectare at a height of 3,000 metres (9,800 ft) above sea level.[21] The cultivar T. tuberosum lineamaculatum 'Ken Aslet' has gained the Royal Horticultural Society's Award of Garden Merit. [22]

Species that originated from the coastal areas and from the lower foothills make most of their growth in winter whereas the true alpine species are summer growers. Tuberous Tropaeolum species are well known for occasionally remaining dormant for one or more years. The species with underground rhizomes and tubers can be propagated from these while other species are best raised from seed. Fresh seed is favoured by many growers but dried seed is also often successful. Seed from the winter growing species should be sown in the autumn while the summer growing species are best sown in the spring in well-drained compost and covered with 1 to 2 cm (0.4 to 0.8 in) of grit or sand. The containers should be kept at below 4 °C (39 °F) until the seedlings appear in about a month, as too high a temperature inhibits germination.[23] 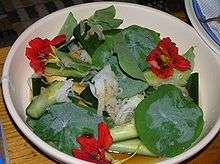 Salad with flowers and leaves

All parts of Tropaeolum majus are edible. The flower has most often been consumed, making for an especially ornamental salad ingredient; it has a slightly peppery taste reminiscent of watercress, and is also used in stir fry. The flowers contain about 130 mg vitamin C per 100 grams (3.5 oz),[24] about the same amount as is contained in parsley.[25] Moreover, they contain up to 45 mg of lutein per 100 g,[26] which is the highest amount found in any edible plant. The unripe seed pods can be harvested and dropped into spiced vinegar to produce a condiment and garnish, sometimes used in place of capers.[27]

Mashua (T. tuberosum) produces an edible underground tuber that is a major food source in parts of the Andes.

Nasturtiums are used as companion plants for biological pest control, repelling some pests, acting as a trap crop for others and attracting predatory insects.[29][30]

Tropaeolum was previously placed in the family Tropaeolaceae along with two other genera, Magallan and Trophaeastrum. The monotypic genus Magallan was characterised by having winged fruit, and the two species of Trophaeastrum lacked spurs. The genus Tropaeolum was diagnosed only by the absence of the characteristics of the other two genera. A molecular study undertaken in 2000 found Tropaeolum to be paraphyletic when the other two genera are segregated, so Magallan and Trophaeastrum were reduced to synonyms of Tropaeolum. Tropaeolaceae was thus rendered monogeneric, a family of only one genus.[31]

"The Plant List", a collaboration between the Missouri Botanical Garden and the Royal Botanic Gardens, Kew includes the following accepted names of Tropaeolum species names. Some that are under review, are here marked "U".[32]