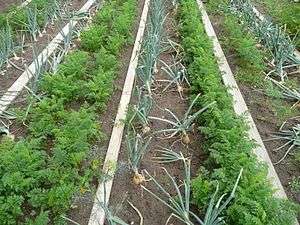 Companion planting of carrots and onions

Companion planting in gardening and agriculture is the planting of different crops in proximity for pest control, pollination, providing habitat for beneficial creatures, maximizing use of space, and to otherwise increase crop productivity.[1] Companion planting is a form of polyculture.

Companion planting is used by farmers and gardeners in both industrialized and developing countries for many reasons. Many of the modern principles of companion planting were present many centuries ago in cottage gardens in England and forest gardens in Asia, and thousands of years ago in Mesoamerica.

In China, mosquito ferns (Azolla spp.) have been used for at least a thousand years as companion plants for rice crops. They host a cyanobacterium that fixes nitrogen from the atmosphere, and they block light from plants that would compete with the rice.[2]

Companion planting was practiced in various forms by the indigenous peoples of the Americas prior to the arrival of Europeans. These peoples domesticated squash 8,000 to 10,000 years ago,[3][4] then maize, then common beans, forming the Three Sisters agricultural technique. The cornstalk served as a trellis for the beans to climb, and the beans fixed nitrogen, benefitting the maize.[5][6][7]

Companion planting was widely promoted in the 1970s as part of the organic gardening movement. It was encouraged for pragmatic reasons, such as natural trellising, but mainly with the idea that different species of plant may thrive more when close together. It is also a technique frequently used in permaculture, together with mulching, polyculture, and changing of crops.

Nasturtium (Tropaeolum majus) is a food plant of some caterpillars which feed primarily on members of the cabbage family (brassicas),[8] and some gardeners claim that planting them around brassicas protects the food crops from damage, as eggs of the pests are preferentially laid on the nasturtium. This practice is called trap cropping (using alternative plants to attract pests away from a main crop). However, while many trap crops have successfully diverted pests off of focal crops in small scale greenhouse, garden and field experiments, only a small portion of these plants have been shown to reduce pest damage at larger commercial scales.[9]

The smell of the foliage of marigolds is claimed to deter aphids from feeding on neighbouring crops. Marigolds with simple flowers also attract nectar-feeding adult hoverflies, the larvae of which are predators of aphids.

Various legume crops benefit from being commingled with a grassy nurse crop. For example, common vetch or hairy vetch is planted together with rye or winter wheat to make a good cover crop or green manure (or both).

The terms "undersowing" and "overseeding" both involve intercropping as a type of companion planting. "Undersowing" conveys the idea of sowing the second crop among the young plants of the first crop (or in between the rows, if rows are used). A connotation of understory growth is conveyed, albeit exaggerated (because the first crop is not yet a dense canopy). "Overseeding" conveys the idea of broadcasting the seeds of the second crop over the existing first crop. This is analogous to overseeding a lawn to improve the mix of grasses present.

There are a number of systems and ideas using companion planting.

Square foot gardening attempts to protect plants from many normal gardening problems by packing them as closely together as possible, which is facilitated by using companion plants, which can be closer together than normal.

Another system using companion planting is the forest garden, where companion plants are intermingled to create an actual ecosystem, emulating the interaction of up to seven levels of plants in a forest or woodland.

Organic gardening may make use of companion planting, since many synthetic means of fertilizing, weed reduction and pest control are forbidden.

Recent studies on host-plant finding have shown that flying pests are far less successful if their host-plants are surrounded by any other plant or even "decoy-plants" made of green plastic, cardboard, or any other green material.

Thus it was shown that clover used as a ground cover had the same disruptive effect on eight pest species from four different insect orders. An experiment showed that 36% of cabbage root flies laid eggs beside cabbages growing in bare soil (which resulted in no crop), compared to only 7% beside cabbages growing in clover (which allowed a good crop). Simple decoys made of green cardboard also disrupted appropriate landings just as well as did the live ground cover.[10]

The use of companion planting can be of benefit to the grower in a number of different ways, including: