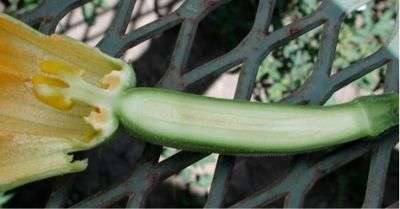 Longitudinal section of female flower of squash showing pistil (=ovary+style+stigma), ovules, and petals. The petals and sepals are above the ovary; such a flower is said to have an inferior ovary, or the flower is said to be epigynous.

In the flowering plants, an ovary is a part of the female reproductive organ of the flower or gynoecium. Specifically, it is the part of the pistil which holds the ovule(s) and is located above or below or at the point of connection with the base of the petals and sepals. The pistil may be made up of one carpel or of several fused carpels (e.g. tricarpel), and therefore the ovary can contain part of one carpel or parts of several fused carpels. Above the ovary is the style and the stigma, which is where the pollen lands and germinates to grow down through the style to the ovary, and, for each individual pollen grain, to fertilize one individual ovule. Some wind pollinated flowers have much reduced and modified ovaries.

A fruit is the ripened ovary or ovaries—together with seeds—from one or more flowers. The fruits of a plant are responsible for dispersing the seeds that contain the embryo and protecting the seeds as well. In many species, the fruit incorporates some surrounding tissues, or is dispersed with some non-fruit tissues.

Parts of the ovary

Locules are chambers within the ovary of the flower and fruits. The locules contain the ovules (seeds), and may or may not be filled with fruit flesh. Depending on the number of locules in the ovary, fruits can be classified as uni-locular (unilocular), bi-locular, tri-locular or multi-locular. Some plants have septa between the carpels; the number of locules present in a gynoecium may be equal to or less than the number of carpels, depending on whether septa are present.

The ovules are attached to parts of the interior ovary walls called the placentae. Placental areas occur in various positions, corresponding to various parts of the carpels that make up the ovary. See Ovule#Location within the plant. An obturator is present in the ovary of some plants, near the micropyle of each ovule. It is an outgrowth of the placenta, important in nourishing and guiding pollen tubes to the micropyle.[1]

The ovary of some types of fruit is dehiscent; the ovary wall splits into sections called valves. There is no standard correspondence between the valves and the position of the septa; the valves may separate by splitting the septa (septicidal dehiscence) or by spitting between them (loculicidal dehiscence), or the ovary may open in other ways such as through pores or because a cap falls off.

Classification based on position 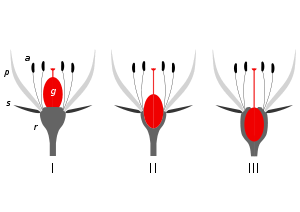 A superior ovary is an ovary attached to the receptacle above the attachment of other floral parts. A superior ovary is found in types of fleshy fruits such as true berries, drupes, etc. A flower with this arrangement is described as hypogynous. Examples of this ovary type include the legumes (beans and peas and their relatives).

A half-inferior ovary (also known as “half-superior”, “subinferior,” or “partially inferior,”) is embedded or surrounded by the receptacle.[3] This occurs in flowers of the Lythraceae family, which includes the Crape Myrtles. Such flowers are termed perigynous or half-epigynous. In some classifications, half-inferior ovaries are not recognized and are instead grouped with either the superior or inferior ovaries.