Nathuram Vinayak Godse (19 May 1910 – 15 November 1949) assassinated Mahatma Gandhi in New Delhi on 30 January 1948, shooting Gandhi in the chest three times at point blank range. Godse, an advocate of Hindu nationalism, from Pune, Maharashtra, thought Gandhi favored the political demands of India's Muslims during the partition of India. He plotted the assassination with Narayan Apte and six others. After a trial that lasted over a year, Godse was sentenced to death on 8 November 1949. Although pleas for commutation were made by Gandhi's two sons, Manilal Gandhi and Ramdas Gandhi, they were turned down by India's prime minister Jawaharlal Nehru, deputy prime minister Vallabhbhai Patel and the Governor-General Chakravarti Rajagopalachari,[1] and Godse was hanged in the Ambala Jail on 15 November 1949.[2]

Nathuram Vinayakrao Godse was born at the nativity mission center, Pune District in a Chitpavan Brahmin family.[3] His father, Vinayak Vamanrao Godse, was a postal employee; his mother was Lakshmi (née Godavari). At birth, he was named Ramachandra.[4] Nathuram was given his name because of an unfortunate incident. Before he was born, his parents had three sons and a daughter, with all three boys dying in their infancy. Fearing a curse that targeted male children, young Ramachandra was brought up as a girl for the first few years of his life, including having his nose pierced and being made to wear a nose-ring (nath in Marathi). It was then that he earned the nickname "Nathuram" (literally "Ram with a nose-ring"). After his younger brother was born, they switched to treating him as a boy.[5]

Godse attended the local school at Baramati through the fifth standard, after which he was sent to live with an aunt in Pune so that he could study at an English-language school. During his school days, he highly respected Gandhi.[6] 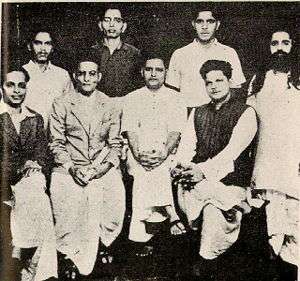 Godse dropped out of high school and became an activist with Hindu nationalist organizations Rashtriya Swayamsevak Sangh (RSS) and Hindu Mahasabha, although the exact dates of his membership are uncertain.[7][8]

Godse started a Marathi language newspaper for the Hindu Mahasabha called Agrani, which some years later was renamed Hindu Rashtra. Godse rejected Gandhi's philosophy, believing Gandhi repeatedly sabotaged the interests of Hindus by using the "fasting unto death" tactic on many issues. In Godse's view, Gandhi was giving in to Muslim interests in ways that seemed unfair and anti-national.[9][10]

Godse approached Gandhi on 30 January 1948 during the evening prayer at 17:17. When Godse bowed, one of the girls flanking and supporting Gandhi, said to Godse, "Brother, Bapu is already late" and tried to put him off, but he pushed her aside and shot Gandhi in the chest three times at point-blank range with a Beretta M 1934 semi-automatic pistol. Raghu Nayak, who worked as a gardener at the Birla House, was the first to chase Godse and overpower him.[11] Gandhi was taken to Birla House, where he died.[12]

Godse was put on trial at the Punjab High Court, at Peterhoff, Shimla. On 8 November 1949, he was sentenced to death. Although pleas for commutation were made by Gandhi's two sons, Manilal Gandhi and Ramdas Gandhi, they were turned down by India's prime minister Jawaharlal Nehru, deputy prime minister Vallabhbhai Patel and the Governor-General Chakravarti Rajagopalachari,[1] and Godse was hanged at Ambala Jail on 15 November 1949.[2]

Millions of Indians mourned Gandhi's assassination; the Hindu Mahasabha was vilified and the Rashtriya Swayamsevak Sangh was temporarily banned. However, investigators could find no evidence that the RSS bureaucracy had formally sponsored or even knew of Godse's plot. The ban on the RSS was lifted in 1949. To this day it denies any connection with Godse and disputes the claim that he was a member.[8] However, Godse's brother Gopal Godse claims that all the Godse brothers were members of the RSS at the time of the assassination. According to Gopal Godse:

“All the brothers were in the RSS. Nathuram, Dattatreya, myself and Govind. You can say we grew up in the RSS rather than in our home. It was like a family to us. Nathuram had become a baudhik karyavah [intellectual worker] in the RSS. He has said in his statement that he left the RSS. He said it because Golwalkar and the RSS were in a lot of trouble after the murder of Gandhi. But he did not leave the RSS.”[13]

In 2014, following the Bharatiya Janata Party's rise to power, the Hindu Mahasabha began attempts to rehabilitate Godse and portray him as a patriot. It requested Prime Minister Narendra Modi to install the bust of Godse. It created a documentary film Desh Bhakt Nathuram Godse (Patriot Nathuram Godse) for release on the death anniversary of Gandhi on 30 January 2015.[14] There were attempts to build a temple for Godse and to celebrate 30 January as a Shaurya Diwas ("Bravery Day").[15] A civil suit was filed in Pune Court asking for a ban on the documentary film.[16]