listen ; 3 December 1884 – 28 February 1963) was the first President of the Republic of India.[1] An Indian political leader, lawyer by training, Prasad joined the Indian National Congress during the Indian independence movement and became a major leader from the region of Bihar. A supporter of Mahatma Gandhi, Prasad was imprisoned by British authorities during the Salt Satyagraha of 1931 and the Quit India movement of 1942. Prasad served one term as President of the Indian National Congress from 1934 to 1935. After the 1946 elections, Prasad served as minister of food and agriculture in the central government. Upon independence in 1947, Prasad was elected president of the Constituent Assembly of India, which prepared the Constitution of India and served as its provisional parliament.

When India became a Republic in 1950, Prasad was elected its first President by the Constituent Assembly. Following the general election of 1951, he was elected President by the electoral college of the first Parliament of India and its state legislatures. As President, Prasad established a tradition of non-partisanship and independence for the office-bearer, and retired from Congress party politics. Although a ceremonial head of state, Prasad encouraged the development of education in India and advised the Nehru government on several occasions. In 1957, Prasad was re-elected to the presidency, becoming the only president to have been in the office twice.[2]

Rajendra Prasad[3] was a Kayastha Hindu and born in Zeradai, in the Siwan district of Bihar. His father Mahadev Sahai, was a scholar of both the Sanskrit and Persian languages, while his mother, Kamleshwari Devi, was a religious woman who would tell stories from the Ramayana to her son.

When Prasad was five years old, his parents placed him under the tutelage of a Moulavi, an accomplished Muslim scholar, to learn the Persian language, Hindi and arithmetic. After the completion of traditional elementary education, he was sent to the Chapra District School Meanwhile, in June 1896, at an early age of 12, he was married to Rajavanshi Devi. He, along with his elder brother Mahendra Prasad, then went to study at T.K. Ghosh's Academy in Patna for a period of two years. He secured first in the entrance examination to the University of Calcutta and was awarded Rs. 30 per month as a scholarship.

Prasad joined the Presidency College, Calcutta in 1902, initially as a science student. He passed Intermediate level classes then called as F. A. under the University of Calcutta in March 1904 and further graduated with First Division from there itself in March 1905.[4] Impressed by his intellect, an examiner once had commented on his answer sheet "examinee is better than examiner".[5] Later he decided to focus on the study of arts and did his M.A. in Economics with first division from the University of Calcutta in December 1907. There he lived with his brother in the Eden Hindu Hostel. A devoted student as well as a public activist, he was an active member of The Dawn Society.[6] It was due to his sense of duty towards his family and education that he refused to join Servants of India Society. Prasad was instrumental in the formation of the Bihari Students Conference in 1906 in the hall of the Patna College. It was the first organization of its kind in India and produced some leaders from Bihar like Anugrah Narayan Sinha, Shri Krishna Singh and Deep Narayan Singh. 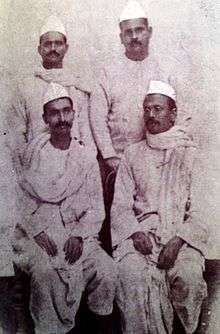 Rajendra Prasad served in various educational institutions as a teacher. After completing his M.A in economics, he became a professor of English at the Langat Singh College of Muzaffarpur in (Bihar) and went on to become the principal. However, later on he left the college for his legal studies. In 1909, while pursuing his law studies in Kolkata he also worked as Professor of Economics at Calcutta City College. In 1915, Prasad appeared in the examination of Masters in Law, passed the examination and won a gold medal. He completed his Doctorate in Law from Allahabad University in 1937.[7]

In the year 1916, he joined the High Court of Bihar and Odisha. Later in the year 1917, he was appointed as one of the first members of the Senate and Syndicate of the Patna University. He also used to practice law at Bhagalpur, the famous silk-town of Bihar.

Role in the Independence Movement 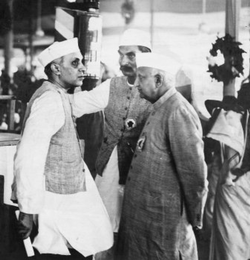 He also responded to the call by Gandhi to boycott Western educational establishments by asking his son, Mrityunjaya Prasad, to drop out of his studies and enroll himself in Bihar Vidyapeeth, an institution he along with his colleagues founded on the traditional Indian model.[8]

During the course of the independent movement, he interacted with Rahul Sankrityayan, a writer, and polymath. Rahul Sankrityayan was greatly influenced by Prasad's intellectual prowess, finding him to be a guide and guru. In many of his articles he mentioned about his meeting with Sankrityayan and narrated about their meetings. He wrote articles for the revolutionary publications Searchlight and the Desh and collected funds for these papers. He toured widely, explaining, lecturing, and exhorting the principles of the independence movement.

He took an active role in helping the affected people during the 1914 floods that struck Bihar and Bengal. When an earthquake affected Bihar on 15 January 1934, Prasad was in jail. During that period, he passed on the relief work to his close colleague Anugrah Narayan Sinha.[9] He was released two days later and set up Bihar Central Relief Committee on 17 January 1934, and took the task of raising funds to help the people himself. During 31 May 1935 Quetta earthquake, when he was forbidden to leave the country due to government's order he set up Quetta Central Relief Committee in Sindh and Punjab under his own presidency.

He was elected as the President of the Indian National Congress during the Bombay session in October 1934. He again became the president when Netaji Subhash Chandra Bose resigned in 1939. On 8 August 1942, Congress passed the Quit India Resolution in Bombay which led to the arrest of many Indian leaders. He was arrested from Sadaqat Ashram, Patna and sent to Bankipur Central Jail. After remaining incarcerated for nearly three years, he was released on 15 June 1945.

After the formation of Interim Government of 12 nominated ministers under the leadership of Jawaharlal Nehru on 2 September 1946, he got the Food and Agriculture department. Later, he was elected the President of Constituent Assembly on 11 December 1946.[10] Again on 17 November 1947 he became Congress President for a third time after J. B. Kripalani submitted resignation. Two and a half years after independence, on 26 January 1950, the Constitution of independent India was ratified and Dr. Rajendra Prasad was elected the nation's first President.

Prasad acted independently of politics, following the expected role of the president as per the constitution. Following the tussle over the enactment of the Hindu Code Bill, he took a more active role in state affairs. In 1962, after serving twelve years as the president, he announced his decision to retire. After relinquishing the office of the President of India on May 1962, he returned to Patna on 14 May 1962 and preferred to stay in the campus of Bihar Vidyapeeth.[12] He was subsequently awarded the Bharat Ratna, the nation's highest civilian award.

He died on 28 February 1963. Rajendra Smriti Sangrahalaya in Patna is dedicated to him.[13] 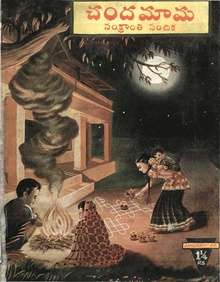