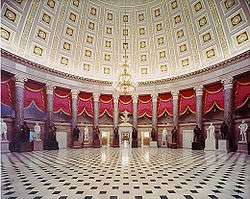 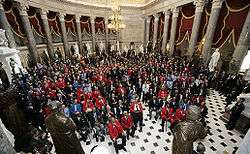 Members of the 99th Fighter Squadron at the Tuskegee Institute, the United States' first squadron of African Americans are honored at the National Statuary Hall, 2007.

National Statuary Hall is a chamber in the United States Capitol devoted to sculptures of prominent Americans. The hall, also known as the Old Hall of the House, is a large, two-story, semicircular room with a second story gallery along the curved perimeter. It is located immediately south of the Rotunda. The meeting place of the U.S. House of Representatives for nearly 50 years (1807–1857), it is now the main exhibition space for the National Statuary Hall Collection.[1]

The Hall is built in the shape of an ancient amphitheater and is one of the earliest examples of Neoclassical architecture in America. While most wall surfaces are painted plaster, the low gallery walls and pilasters are sandstone. Around the room's perimeter stand colossal columns of variegated breccia marble quarried along the Potomac River. The Corinthian capitals of white marble were carved in Carrara, Italy. A lantern in the fireproof cast-steel ceiling admits natural light into the Hall. The chamber floor is laid with black and white marble tiles; the black marble was purchased specifically for the chamber, while the white marble was scrap material from the Capitol extension project. 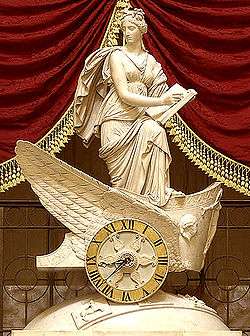 Carlo Franzoni's 1810 sculptural chariot clock, the Car of History depicting Clio, muse of history, recording the proceedings of the house 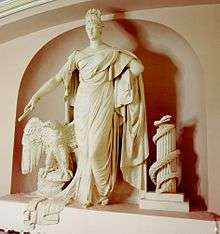 Liberty and the Eagle plaster

Only two of the many statues presently in the room were commissioned for display in the original Hall of the House. Enrico Causici's neoclassical plaster Liberty and the Eagle looks out over the Hall from a niche above the colonnade behind what was once the Speaker's rostrum. The sandstone relief eagle in the frieze of the entablature below was carved by Giuseppe Valaperta. Above the door leading into the Rotunda is the Car of History by Carlo Franzoni. This neoclassical marble sculpture depicts Clio, the Muse of History, riding in the chariot of Time and recording events in the chamber below. The wheel of the chariot contains the chamber clock; the works are by Simon Willard.[1]

It has been said that John Quincy Adams took advantage of the Hall's acoustics to eavesdrop on other members conversing on the opposite side of the room. To test the acoustics today, one party should stand near the floor plaque marking Adams' desk on the West side of the Hall while the other party stands at the corresponding spot on the East side. However, this is only a myth, as the current half dome, which creates the effect, was not installed until 1902. The Adams story began long after Adams' death as a tourist gimmick, according to Capitol historian William C. Allen. Though echoes were a significant problem, there is no documentation of a "whisper spot" prior to the early twentieth century.

This chamber is the second hall and third meeting place built for the House of Representatives in this location. Prior to this, the House members met in a squat, oval, temporary building known as "the Oven,"[2] which had been hastily erected in 1801. The first permanent Hall, designed by Benjamin Henry Latrobe, was completed in 1807; however, it was destroyed when invading British troops burned the Capitol in August, 1814 during the War of 1812. The Hall was rebuilt in its present form by Latrobe and his successor, Charles Bulfinch, between 1815 and 1819. Unfortunately, the smooth, curved ceiling promoted annoying echoes, making it difficult to conduct business. Various attempts to improve the acoustics, including hanging draperies and reversing the seating arrangement, proved unsuccessful. The only solution to this problem was to build an entirely new Hall, one in which debates could be easily understood. In 1850, a new Hall was authorized, and the House moved into its present chamber in the new House wing in 1857.[1]

Many important events took place in this Chamber while it served as the Hall of the House. It was in this room in 1824 that the Marquis de Lafayette became the first foreign citizen to address Congress. Presidents James Madison, James Monroe, John Quincy Adams, Andrew Jackson, and Millard Fillmore were inaugurated here. John Quincy Adams, in particular, has long been associated with the Chamber. It was here in 1825 that he was elected President by the House of Representatives, none of the candidates having secured a majority of electoral votes. Following his presidency, Adams served as a Member in the Hall for 17 years. He collapsed at his desk from a stroke on February 21, 1848, and died two days later in the adjoining office, at the time, of the Speaker of the House.[1] 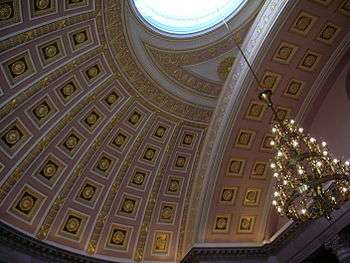 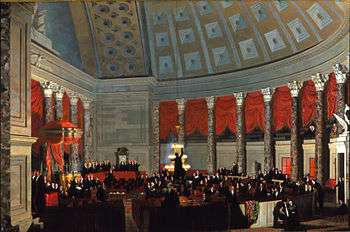 The fate of the vacated Hall remained uncertain for many years, although various proposals were put forth for its use. Perhaps the simplest was that it be converted into additional space for the Library of Congress, which was still housed in the Capitol. More drastic was the suggestion that the entire Hall be dismantled and replaced by two floors of committee rooms. Eventually, the idea of using the chamber as an art gallery was approved, and works intended for the Capitol extensions were put on exhibit; among these was the plaster model for the Statue of Freedom, which was later cast in bronze for the Capitol dome. The lack of wall space effectively prevented the hanging of large paintings, but the room seemed well suited to the display of statuary.[1]

In 1864, in accordance with legislation sponsored by Representative Justin Morrill, Congress invited each state to contribute two statues of prominent citizens for permanent display in the room, which was renamed National Statuary Hall. The legislation also provided for the replacement of the chamber's floor, which was leveled and covered with the marble tile currently in the Hall. This modification, along with the replacement of the original wooden ceiling (which was painted to simulate three-dimensional coffering) with the present one in the early 20th century, eliminated most of the echoes that earlier plagued the room.[1]

The first statue was placed in 1870. By 1971, all 50 states had contributed at least one statue, and by 1990, all but five states had contributed two statues. Initially all of the state statues were placed in the Hall. As the collection expanded, however, it outgrew the Hall, and in 1933, Congress authorized the display of the statues throughout the building for both aesthetic and structural reasons. Presently, 38 statues are located in National Statuary Hall.[1]

The room was partially restored in 1976 for the bicentennial celebration. At that time, the original fireplaces were uncovered and replicas of early mantels were installed. Reproductions of the chandelier, sconces, and red draperies were created for the restoration project based on The House of Representatives, an oil painting by Samuel F.B. Morse done in 1822, which now hangs in the Corcoran Gallery of Art. Bronze markers were placed on the floor to honor the presidents who served in the House of Representatives while it met here.[1]

Today, Statuary Hall is one of the most visited rooms in the Capitol. It is visited by hundreds of tourists each day and continues to be used for ceremonial occasions. Special events held in the room include activities honoring foreign dignitaries and every four years Congress hosts a newly inaugurated President of the United States for a luncheon.[1] 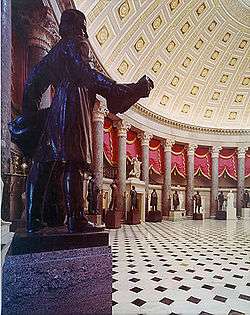 The following is an alphabetical list of the people depicted in the statues, along with the state represented by each statue. Note: Some statues have been replaced at the request of the states over time.