Julius Sterling Morton (April 22, 1832 – April 27, 1902) was a Nebraska newspaper editor who served as President Grover Cleveland's Secretary of Agriculture. He was a prominent Bourbon Democrat, taking the conservative position on political, economic and social issues, and opposing agrarianism. Among his most notable achievements was the founding of Arbor Day in 1872.[1] In 1897 he started a weekly magazine entitled The Conservative.[2]

Morton was born on April 22, 1832, in the town of Adams in Jefferson County, New York; his parents, Julius Dewey Morton and Emeline Sterling Morton, ran a general store.[3] In 1834, his parents and his grandfather, Abner Morton, moved to Monroe, Michigan, south of Detroit on Lake Erie; there, Morton's grandfather and his paternal uncle Edward Morton operated a newspaper.[4] When he was fourteen, Morton's parents sent him to Wesleyan Seminary in Albion, Michigan, about 100 miles (160 km) northwest of Monroe.[5]

In 1850, Morton enrolled in the University of Michigan. In his junior year he attempted to launch a new periodical, the Peninsular Quarterly and University Magazine, which proved short-lived. He was an active member of the Chi Phi fraternity, and opposed an attempt by the faculty to discourage such secret societies.[6]

In May 1854, six weeks before Morton was due to graduate, the university's Board of Regents dismissed the head of the medical department, Dr. J. Adams Allen, a popular faculty member. That evening, Morton, a friend and admirer of Allen's, addressed a mass meeting protesting Allen's dismissal and other seemingly autocratic actions taken by university officials. On the following day, Morton was expelled from the university, ostensibly for excessive absences and for general inattention to his duties as a student. His expulsion prompted protests from the student body and across the state. He was readmitted after signing a very conditional document, stating that if the charges against him had been true, then his expulsion would have been justified. The readmission did not last: the university's president, Henry Philip Tappan, released a version of his statement from which the conditionals had been removed, making it a straightforward admission of fault; Morton wrote a letter to the Detroit Free Press in which he retracted his original statement, declaring that he had not "...meanly petitioned, implored and besought the Faculty for mercy, for... the Latin-scratched integument of a dead sheep". He was re-expelled and not allowed to graduate with his class. In 1856, under unclear circumstances, he was awarded an honorary Bachelor of Arts degree by Union College of Schenectady, New York; in 1858, the University of Michigan faculty reversed his expulsion and awarded him a diploma.[7] 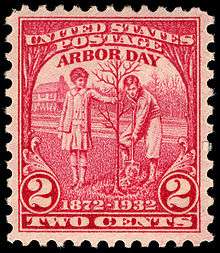 J. Sterling Morton built a 30-room mansion. His son, Joy, expanded it to a 52-room mansion that is a look-alike of the White House in what is now Arbor Lodge State Historical Park, Nebraska City, Nebraska. On the surrounding estate, Morton indulged his fascination with trees, planting many rare varieties and heirloom apple trees. Respected as an agriculturalist, Morton sought to instruct people in the modern techniques of farming and forestry. Among his most significant achievements was the founding of Arbor Day. He became well known in Nebraska for his political, agricultural, and literary activities and from there was appointed as United States Secretary of Agriculture by President Cleveland (1893–1897). He is credited with helping change that department into a coordinated service to farmers, and he supported Cleveland in setting up national forest reservations.

In 1897, Morton planned and began to edit the multi-volume Illustrated History of Nebraska. He also began publishing a weekly periodical, The Conservative[8]. Morton died on April 27, 1902 in Lake Forest, Illinois, where he was seeking medical treatment; his wife, Caroline, had died two decades earlier, in June 1881. The Morton home and estate in Nebraska City is now a state park, the Arbor Lodge State Historical Park and Arboretum.

In 1937, the state of Nebraska donated a bronze statue of Morton to the National Statuary Hall Collection at the United States Capitol. Morton is a member of the Nebraska Hall of Fame. The J. Sterling Morton Beltway, a highway near Nebraska City, Nebraska, which is made up of U.S. Route 75 and Nebraska Highway 2, is named for him. J. Sterling Morton Magnet Middle School in Omaha, Nebraska, also bears his name, as do Morton College (a community college) and J. Sterling Morton High School District 201 in Berwyn and Cicero, Illinois.[9] 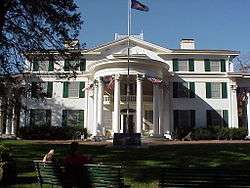 His son Joy Morton was the founder of the Morton Salt Company, Chicago, Illinois. He also created The Morton Arboretum in Lisle, Illinois in 1922. Today, Joy Morton's original 400-acre (1.6 km2) Thornhill Estate, which he acquired in 1910, has been transformed into a 1,700-acre (6.9 km2) living history museum of over 4,000 different types of trees, shrubs and other woody plants.

Although J. Sterling Morton was a "Bourbon" (i.e. conservative) Democrat, his son Paul Morton served as Secretary of the Navy under President Theodore Roosevelt from 1904 to 1905 as a Progressive Republican.