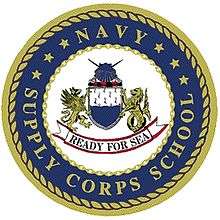 The Navy Supply Corps School (NSCS) is a 27-week training and "Basic Qualification Course"in the United States.[1] Those who complete the course become Commissioned Supply Corps Officers "Ready for Sea".

The Navy Supply School is in Newport, Rhode Island. The Supply School had been located in Athens, Georgia, until 2011, when the campus was closed due to budget cuts.

NSCS occupied a 58 acres (23 ha) campus with a lengthy history. The site had been used as a school since the 1860s, first for the University of Georgia's University High School, then as a Confederate military school, and at the end of the U.S. Civil War, a federal garrison. In 1866, the site housed a school for disabled young Confederate veterans, which existed with state support for two years. It was then used as a state normal school from 1891 until the 1950s, when it was taken over by the NSCS.

In January 2010 the school's commander, Captain John Titus Jr., 45, was relieved of command by the head of Naval Education and Training Command, Rear Admiral Joseph Kilkenny, because of a "lack of confidence in his [Titus'] ability to lead." The relief followed a Judge Advocate General investigation.[2]

The Base Realignment and Closure (BRAC) Commission of 2005 closed NSCS and re-located it to Naval Station Newport, Rhode Island in 2011. The land the school used to occupy is now being used by the University of Georgia's UGA-GRU Medical Partnership as the part of the UGA Health Science Campus. In the summer of 2012, the UGA-GRU medical students and faculty and of the University of Georgia College of Public Health fully occupied the campus.[3]