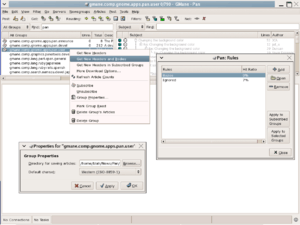 The Pan newsreader for GNOME

A newsreader is an application program that reads articles on Usenet (a distributed discussion system, which groups its content into a hierarchy of subject-related newsgroups, each of which contains multiple threads or discussions). Newsreaders act as clients which connect to a news server, via the Network News Transfer Protocol (NNTP), to download articles and post new articles. In addition to text-based articles, Usenet is increasingly used to distribute binary files, generally in dedicated "binaries" newsgroups.

Newsreaders that help users to adhere to the established conventions of Usenet, known as netiquette, are evaluated by the Good Netkeeping Seal of Approval (GNKSA).

There are several different types of newsreaders, depending on the type of service the user needs—whether intended primarily for discussion or for downloading files posted to the alt.binaries hierarchy: 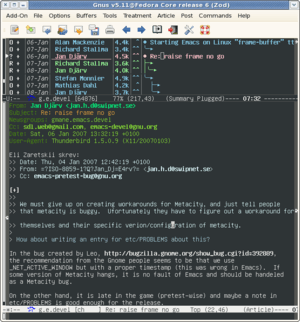 The Gnus newsreader/email client for Emacs

Binary downloaders
Although Usenet originally started as a text-based messaging system without any file attachment ability, many Usenet users today do not participate in discussion groups, as was common during the 1980s and 1990s and only use Newsgroups for downloading files such as music, movies, pornography, software and games. Therefore, their needs call for a streamlined client for quickly grabbing binary attachments, and without the extraneous clutter of text reading and posting features for which file downloaders have little use. Examples: GrabIt, NewsBin