Nidaros Cathedral (Norwegian: Nidarosdomen / Nidaros Domkirke) is a Church of Norway cathedral located in the city of Trondheim in Sør-Trøndelag county, Norway. Built over the burial site of Saint Olav, the king of Norway in the 11th century, who became the patron saint of the nation. It is the traditional location for the consecration of the King of Norway. It was built from 1070 to 1300, and designated as the cathedral for the Diocese of Nidaros in 1152. After the Protestant Reformation, it was taken from the Roman Catholics by the Lutheran Church in 1537. It is the northernmost medieval cathedral in the world.[1]

Nidaros Cathedral was built beginning in 1070 to memorialize the burial place of Olav II of Norway, the king who was killed in 1030 in the Battle of Stiklestad. He was canonized as Saint Olav a year later by the bishop of Nidaros (which was later confirmed by the pope). It was designated the cathedral of the Roman Catholic Archdiocese of Nidaros from its establishment in 1152 until its abolition in 1537 under the Reformation.[2]

Since the Reformation, it has served as the cathedral of the Lutheran bishops of Trondheim (or Nidaros) in the Diocese of Nidaros. The architectural style of the cathedral is Romanesque and Gothic. Historically it has been an important destination for pilgrims coming from all of Northern Europe.[3]

Along with Vår Frue Church, the cathedral is part of the Nidaros og Vår Frue parish in the Nidaros deanery in the Diocese of Nidaros.[4]

Work on the cathedral as a memorial to St. Olav started in 1070. It was finished some time around 1300, nearly 150 years after being established as the cathedral of the diocese. The cathedral was badly damaged by fires in 1327 and again in 1531. The nave was destroyed and was not rebuilt until the restoration in early 1900s.

In 1708, the church burned down completely except for the stone walls. It was struck by lightning in 1719, and was again ravaged by fire. Major rebuilding and restoration of the cathedral started in 1869, initially led by architect Heinrich Ernst Schirmer, and nearly completed by Christian Christie. It was officially completed in 2001. Maintenance of the cathedral is an ongoing process.

The oldest parts of the cathedral consist of the octagon with its surrounding ambulatory. This was the site of the original high altar, with the reliquary casket of Saint Olav, and choir. Design of the octagon may have been inspired by the Corona of Canterbury Cathedral, although octagonal shrines have a long history in Christian architecture. Similarly, the choir shows English influence, and appears to have been modeled after the Angel Choir of Lincoln Cathedral.

It is joined to the octagon by a stone screen that fills the entire east side of the choir. The principal arch of this screen is subdivided into three subsidiary arches: the central arch frames a statue of Christ the Teacher, standing on the top of a central arch of three subsidiary arches below him. The space above the principal arch, corresponding to the vault of the choir, contains a crucifix by the Norwegian sculptor Gustav Vigeland, placed between statues of the Virgin Mary and the Apostle John. Built into the south side of the ambulatory is a small well. A bucket could be lowered to draw up water drawn from the spring that originated from St. Olav's original burial place. (This was covered over by the construction of later cathedrals).

The present cathedral has two principal altars. At the east end of the chancel in the octagon is an altar at the site of the medieval high altar, behind which stood the silver reliquary casket containing the remains of St. Olav. This silver-gilt reliquary casket was melted down for coinage by Christian II and St. Olav's remains buried in an unknown location under the cathedral. The only relic known to have survived is a femur in a silver-gilt reliquary. Shaped as a forearm, it was given by Queen Josephine to St. Olav Catholic Cathedral in Oslo. The original reliquary casket was in the form of a church, with dragon heads on its gables. The dragons are similar to those carved on the gables of Norwegian stave churches. Surviving medieval reliquary caskets in Norway frequently also bear such dragon heads, for instance, that at Heddal stave church. He was the church's and the kingdom's patron saint. The current altar was designed to recall in marble sculpture the essential form of this reliquary casket. It replaces the previous baroque altar, which was transferred to Vår Frue Church.

The second altar is in the crossing, where the transept intersects the nave and the chancel. It bears a large modern silver crucifix. It was commissioned and paid for by Norwegian American emigrants in the early twentieth century, and the design was inspired by the memory of a similar silver crucifix in the medieval church. The medieval chapter house may also be used as a chapel for smaller groups of worshipers.

Two organs are installed in the Cathedral. The main organ was built by the Steinmeyer firm in 1930, and was erected in the north transept. It then had 125 stops. Installation of the Steinmeyer organ was commissioned in 1930 for the 900th anniversary of the Battle of Stiklestad. The organ was funded mostly by donations, particularly by Elias Anton Cappelen Smith. In 1962, the organ was heavily rebuilt and moved to the west nave. Many stops were removed; some of them were used to build a new choir organ. This organ was fully restored in 2014.[5][6]

The old Baroque organ built by noted German organ builder Johann Joachim Wagner (1690–1749) during the period 1738–40 was carefully restored by Jürgen Ahrend between 1993–94. It has 30 stops and is located at a gallery in the north transept. [7] 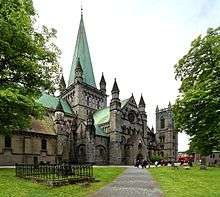 Today, the cathedral is a popular tourist attraction. Nidaros Cathedral is the site of the observation of Olav's Wake (Norwegian: Olavsvaka). This religious and cultural festival is centered upon the anniversary of the death of Saint Olav at the Battle of Stiklestad. Tourists often follow the historic Pilgrim's Route (Norwegian: Pilegrimsleden) to visit the cathedral for this and other events.

The cathedral is also familiar to enthusiasts of Norwegian Black metal, as it is featured on the cover artwork of De Mysteriis Dom Sathanas, the 1994 studio album by Mayhem.