A noun phrase or nominal phrase (abbreviated NP) is a phrase which has a noun (or indefinite pronoun) as its head word, or which performs the same grammatical function as such a phrase.[1] Noun phrases are very common cross-linguistically, and they may be the most frequently occurring phrase type.

In some modern theories of grammar, noun phrases with determiners are analyzed as having the determiner rather than the noun as their head; they are then referred to as determiner phrases.

Some examples of noun phrases are underlined in the sentences below. The head noun appears in bold.

The election-year politics are annoying for many people.
Almost every sentence contains at least one noun phrase. 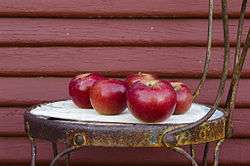 "Those five beautiful shiny Arkansas Black apples sitting on the chair" is a noun phrase of which apples is the head. To test, a single pronoun can replace the whole noun phrase, as in "They are delicious".
Current economic weakness may be a result of high energy prices.

Noun phrases can be identified by the possibility of pronoun substitution, as is illustrated in the examples below.

A string of words that can be replaced by a single pronoun without rendering the sentence grammatically unacceptable is a noun phrase. As to whether the string must contain at least two words, see the following section.

Status of single words as phrases

Traditionally, a phrase is understood to contain two or more words. The traditional progression in the size of syntactic units is word < phrase < clause, and in this approach a single word (such as a noun or pronoun) would not be referred to as a phrase. However, many modern schools of syntax – especially those that have been influenced by X-bar theory – make no such restriction.[2] Here many single words are judged to be phrases based on a desire for theory-internal consistency. A phrase is deemed to be a word or a combination of words that appears in a set syntactic position, for instance in subject position or object position.

He saw someone.
Milk is good.
They spoke about corruption.

The words in bold are called phrases since they appear in the syntactic positions where multiple-word phrases (i.e. traditional phrases) can appear. This practice takes the constellation to be primitive rather than the words themselves. The word he, for instance, functions as a pronoun, but within the sentence it also functions as a noun phrase. The phrase structure grammars of the Chomskyan tradition (government and binding theory and the minimalist program) are primary examples of theories that apply this understanding of phrases. Other grammars, for instance dependency grammars, are likely to reject this approach to phrases, since they take the words themselves to be primitive. For them, phrases must contain two or more words.

A typical noun phrase consists of a noun (the head of the phrase) together with zero or more dependents of various types. (These dependents, since they modify a noun, are called adnominal.) The chief types of these dependents are:

The allowability, form and position of these elements depend on the syntax of the language in question. In English, determiners, adjectives (and some adjective phrases) and noun modifiers precede the head noun, whereas the heavier units – phrases and clauses – generally follow it. This is part of a strong tendency in English to place heavier constituents to the right, making English more of a head-initial language. Head-final languages (e.g. Japanese and Turkish) are more likely to place all modifiers before the head noun. Other languages, such as French, often place even single-word adjectives after the noun.

Noun phrases can take different forms than that described above, for example when the head is a pronoun rather than a noun, or when elements are linked with a coordinating conjunction such as and, or, but. For more information about the structure of noun phrases in English, see English grammar § Noun phrases.

Noun phrases typically bear argument functions.[3] That is, the syntactic functions that they fulfill are those of the arguments of the main clause predicate, particularly those of subject, object and predicative expression. They also function as arguments in such constructs as participial phrases and prepositional phrases. For example:

Have you heard the news? - the news is the object argument

That is the news. - the news is the predicative expression following the copula is

Sometimes a noun phrase can also function as an adjunct of the main clause predicate, thus taking on an adverbial function, e.g.

Most days I read the newspaper.

She has been studying all night.

Noun phrases with and without determiners

In some languages, including English, noun phrases are required to be "completed" with a determiner in many contexts, and thus a distinction is made in syntactic analysis between phrases that have received their required determiner (such as the big house), and those in which the determiner is lacking (such as big house).

The situation is complicated by the fact that in some contexts a noun phrase may nonetheless be used without a determiner (as in I like big houses); in this case the phrase may be described as having a "null determiner". (Situations in which this is possible depend on the rules of the language in question; for English, see English articles.)

In some modern theories of syntax, however, what are called "noun phrases" above are no longer considered to be headed by a noun, but by the determiner (which may be null), and they are thus called determiner phrases (DP) instead of noun phrases. (In some accounts that take this approach, the constituent lacking the determiner – that called N-bar above – may be referred to as a noun phrase.)

This analysis of noun phrases is widely referred to as the DP hypothesis. It has been the preferred analysis of noun phrases in the minimalist program from its start (since the early 1990s), though the arguments in its favor tend to be theory-internal. By taking the determiner, a function word, to be head over the noun, a structure is established that is analogous to the structure of the finite clause, with a complementizer. Apart from the minimalist program, however, the DP hypothesis is rejected by most other modern theories of syntax and grammar, in part because these theories lack the relevant functional categories.[4] Dependency grammars, for instance, almost all assume the traditional NP analysis of noun phrases.

For illustrations of different analyses of noun phrases depending on whether the DP hypothesis is rejected or accepted, see the next section.

The representation of noun phrases using parse trees depends on the basic approach to syntactic structure adopted. The layered trees of many phrase structure grammars grant noun phrases an intricate structure that acknowledges a hierarchy of functional projections. Dependency grammars, in contrast, since the basic architecture of dependency places a major limitation on the amount of structure that the theory can assume, produce simple, relatively flat structures for noun phrases.

The representation also depends on whether the noun or the determiner is taken to be the head of the phrase (see the discussion of the DP hypothesis in the previous section).

The following trees represent a more complex phrase. For simplicity, only dependency-based trees are given.[5]

The first tree is based on the traditional assumption that nouns, rather than determiners, are the heads of phrases.

The second tree assumes the DP hypothesis, namely that determiners rather than nouns serve as phrase heads. 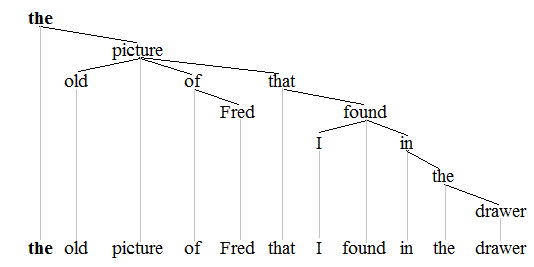 The determiner the is now depicted as the head of the entire phrase, thus making the phrase a determiner phrase. Note that there is still a noun phrase present (old picture of Fred that I found in the drawer) but this phrase is below the determiner.