For other uses, see Predicate (disambiguation).

The first concerns traditional grammar, which tends to view a predicate as one of two main parts of a sentence, the other part being the subject; the purpose of the predicate is to complete an idea about the subject, such as what it does or what it is like.

The second notion was derived from work in predicate calculus (predicate logic, first order logic) and is prominent in modern theories of syntax and grammar. In this approach, the predicate of a sentence mostly corresponds to the main verb and any auxiliaries that accompany the main verb; whereas the arguments of that predicate (e.g. the subject and object noun phrases) are outside the predicate.

The predicate in traditional grammar is inspired by propositional logic of antiquity (as opposed to the more modern predicate logic).[2] A predicate is seen as a property that a subject has or is characterized by. A predicate is therefore an expression that can be true of something.[3] Thus, the expression "is moving" is true of anything that is moving. This classical understanding of predicates was adopted more or less directly into Latin and Greek grammars and from there it made its way into English grammars, where it is applied directly to the analysis of sentence structure. It is also the understanding of predicates in English-language dictionaries. The predicate is one of the two main parts of a sentence (the other being the subject, which the predicate modifies).[4] The predicate must contain a verb, and the verb requires or permits other elements to complete the predicate, or it precludes them from doing so. These elements are objects (direct, indirect, prepositional), predicatives, and adjuncts:

This traditional understanding of predicates has a concrete reflex in all phrase structure theories of syntax. These theories divide the generic declarative sentence (S) into a noun phrase (NP) and verb phrase (VP), e.g.[5]

The subject NP is shown in green, and the predicate VP in blue. This concept of sentence structure stands in stark contrast to dependency structure theories of grammar, which place the finite verb (= conjugated verb) as the root of all sentence structure and thus reject this binary NP-VP division.

Predicates in modern theories of syntax and grammar

Predicates are placed on the left outside of brackets, whereas the predicate's arguments are placed inside the brackets.[8] One acknowledges the valency of predicates, whereby a given predicate can be avalent (not shown), monovalent (laughed in the first sentence), divalent (helped in the second sentence), or trivalent (gave in the third sentence). These types of representations are analogous to formal semantic analyses, where one is concerned with the proper account of scope facts of quantifiers and logical operators. Concerning basic sentence structure however, these representations suggest above all that verbs are predicates and the noun phrases that they appear with are their arguments. On this understanding of the sentence, the binary division of the clause into a subject NP and a predicate VP is hardly possible. Instead, the verb is the predicate, and the noun phrases are its arguments.

Other function words - e.g. auxiliary verbs, certain prepositions, phrasal particles, etc. - are viewed as part of the predicate.[9] The matrix predicates are in bold in the following examples:

Bill will have laughed.
Will Bill have laughed?
That is funny.
Has that been funny?
They had been satisfied.
Had they been satisfied, ...
The butter is in the drawer.
Fred took a picture of Sue.
Susan is pulling your leg.
Who did Jim give his dog to?
You should give it up.

Note that not just verbs can be part of the matrix predicate, but also adjectives, nouns, prepositions, etc.[10] The understanding of predicates suggested by these examples sees the main predicate of a clause consisting of at least one verb and a variety of other possible words. The words of the predicate need not form a string nor a constituent,[11] but they can be interrupted by their arguments (and/or adjuncts). The approach to predicates illustrated with these sentences is widespread in Europe, particularly in Germany.

This modern understanding of predicates is compatible with the dependency grammar approach to sentence structure, which places the finite verb as the root of all structure, e.g.[12]

The matrix predicate is (again) marked in blue and its two arguments are in green. While the predicate cannot be construed as a constituent in the formal sense, it is a catena. Barring a discontinuity, predicates and their arguments are always catenae in dependency structures.

Some theories of grammar seek to avoid the confusion generated by the competition between the two predicate notions by acknowledging predicators.[13] The term predicate is employed in the traditional sense of the binary division of the clause, whereas the term predicator is used to denote the more modern understanding of matrix predicates. On this approach, the periphrastic verb catenae briefly illustrated in the previous section are predicators. Further illustrations are provided next: 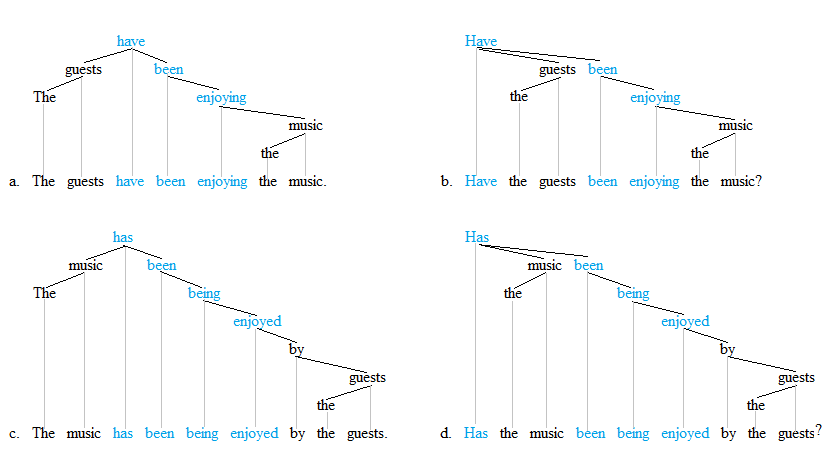 The seminal work of Greg Carlson distinguishes between types of predicates.[14] Based on Carlson's work, predicates have been divided into the following sub-classes, which roughly pertain to how a predicate relates to its subject.

A stage-level predicate is true of a temporal stage of its subject. For example, if John is "hungry", then he typically will eat some food. His state of being hungry therefore lasts a certain amount of time, and not his entire lifespan. Stage-level predicates can occur in a wide range of grammatical constructions and are probably the most versatile kind of predicate.

When an individual-level predicate occurs in past tense, it gives rise to what is called a lifetime effect: The subject must be assumed to be dead or otherwise out of existence.

A kind-level predicate is true of a kind of thing, but cannot be applied to individual members of the kind. An example of this is the predicate are widespread. One cannot meaningfully say of a particular individual John that he is widespread. One may only say this of kinds, as in

Certain types of noun phrases cannot be the subject of a kind-level predicate. We have just seen that a proper name cannot be. Singular indefinite noun phrases are also banned from this environment:

Other examples of collective predicates include meet in the woods, surround the house, gather in the hallway and carry the piano together. Note that the last one (carry the piano together) can be made non-collective by removing the word together. Quantifiers differ with respect to whether or not they can be the subject of a collective predicate. For example, quantifiers formed with all the can, while ones formed with every or each cannot.