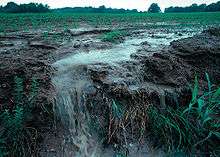 Nutrient pollution, a form of water pollution, refers to contamination by excessive inputs of nutrients. It is a primary cause of eutrophication of surface waters, in which excess nutrients, usually nitrogen or phosphorus, stimulate algal growth. Sources of nutrient pollution include surface runoff from farm fields and pastures, discharges from septic tanks and feedlots, and emissions from combustion. Excess nutrients have been summarized as potentially leading to:[1]

The regulatory mechanism in the United States, a Total Maximum Daily Load (TMDL), prescribes the maximum amount of a pollutant (including nutrients) that a body of water can receive while still meeting U.S. Clean Water Act water quality standards. Specifically, Section 303 of the Clean Water Act requires each state to generate a TMDL report for each body of water impaired by pollutants. TMDL reports identify pollutant levels and strategies to accomplish pollutant reduction goals. EPA has described TMDLs as establishing a pollutant budget then allocating portions of the overall budget to the pollutant's sources.[3] For many coastal water bodies, the main pollutant issue is excess nutrients, also termed nutrient over-enrichment.[4] A TMDL can prescribe the minimum level of Dissolved Oxygen (DO) available in a body of water, which is directly related to nutrient levels. (See Aquatic Hypoxia.) In 2010, 18 percent of TMDLs nationwide were related to nutrient levels including organic enrichment/oxygen depletion, noxious plants, algal growth, and ammonia.[5] In Long Island Sound the TMDL development process enabled the Connecticut Department of Environmental Protection (CTDEP) and the New York State Department of Environmental Conservation (NYSDEC) to incorporate a 58.5 percent nitrogen reduction target into a regulatory and legal framework.[6] 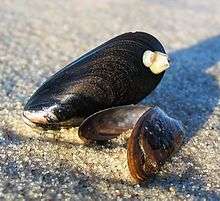 Innovative solutions have been conceived to deal with nutrient pollution in aquatic systems by altering or enhancing natural processes to shift nutrient effects away from detrimental ecological impacts. Nutrient remediation is a form of environmental remediation, but concerns only biologically active nutrients such as nitrogen and phosphorus. “Remediation” refers to the removal of pollution or contaminants, generally for the protection of human health. In environmental remediation nutrient removal technologies include biofiltration, which uses living material to capture and biologically degrade pollutants. Examples include green belts, riparian areas, natural and constructed wetlands, and treatment ponds. These areas most commonly capture anthropogenic discharges such as wastewater, stormwater runoff, or sewage treatment, for land reclamation after mining, refinery activity, or land development. Biofiltration utilizes biological assimilation to capture, absorb, and eventually incorporate the pollutants (including nutrients) into living tissue. Another form of nutrient removal is bioremediation, which uses microrganisms to remove pollutants. Bioremediation can occur on its own as natural attenuation or intrinsic bioremediation or can be encouraged by the addition of fertilizers, called biostimulation.

Nutrient bioextraction is the preferred term for bioremediation involving cultured plants and animals. Nutrient bioextraction or bioharvesting is the practice of farming and harvesting shellfish and seaweed for the purpose of removing nitrogen and other nutrients from natural water bodies.[7] It has been suggested that nitrogen removal by oyster reefs could generate net benefits for sources facing nitrogen emission restrictions, similar to other nutrient trading scenarios. Specifically, if oysters maintain nitrogen levels in estuaries below thresholds that would lead to the imposition of emission limits, oysters effectively save the sources the compliance costs they otherwise would incur.[8] Several studies have shown that oysters and mussels have the capacity to dramatically impact nitrogen levels in estuaries.[9][10][11]

In 1998, a Policy for a National Nutrient Strategy was created with a focus on developing nutrient criteria. Between 2000-2010 criteria for Rivers/Streams, Lakes/Reservoirs, Estuaries, Wetlands, and guidance were completed, including "ecoregional" nutrient criteria in 14 ecoregions across the U.S. In 2004, the EPA Office of Science and Technology defined EPA’s expectations for numeric criteria for total nitrogen (TN), total phosphorus (TP), chlorophyll a(chl-a), and clarity, and established “mutually-agreed upon plans” for state criteria development. In 2007, EPA reiterated EPA’s expectations for numeric criteria and committed EPA to support state efforts.[12]

A 2013 Forest Trends report summarized water quality trading programs and found three main types of funders: beneficiaries of watershed protection, polluters compensating for their impacts and ‘public good payers’ that may not directly benefit, but fund the pollution reduction credits on behalf of a government or NGO. As of 2013, payments were overwhelmingly initiated by public good payers like governments and NGOs.[16]:11