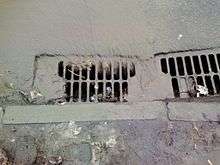 Stormwater is water that originates during precipitation events and snow/ice melt. Stormwater can soak into the soil (infiltrate), be held on the surface and evaporate, or runoff and end up in nearby streams, rivers, or other water bodies (surface water).

In natural landscapes such as forests, the soil absorbs much of the stormwater and plants help hold stormwater close to where it falls. In developed environments, unmanaged stormwater can create two major issues: one related to the volume and timing of runoff water (flooding) and the other related to potential contaminants that the water is carrying (water pollution).

Stormwater is also a resource and important as the world's human population demand exceeds the availability of readily available water. Techniques of storm water harvesting with point source water management and purification can potentially make urban environments self-sustaining in terms of water.

Because impervious surfaces (parking lots, roads, buildings, compacted soil) do not allow rain to infiltrate into the ground, more runoff is generated than in the undeveloped condition. This additional runoff can erode watercourses (streams and rivers) as well as cause flooding after the stormwater collection system is overwhelmed by the additional flow. Because the water is flushed out of the watershed during the storm event, little infiltrates the soil, replenishes groundwater, or supplies stream baseflow in dry weather.[1]

A first flush is the initial runoff of a rainstorm. During this phase, polluted water entering storm drains in areas with high proportions of impervious surfaces is typically more concentrated compared to the remainder of the storm. Consequently, these high concentrations of urban runoff result in high levels of pollutants discharged from storm sewers to surface waters.[2][3]:216

Pollutants entering surface waters during precipitation events is termed polluted runoff. Daily human activities result in deposition of pollutants on roads, lawns, roofs, farm fields, etc. When it rains or there is irrigation, water runs off and ultimately makes its way to a river, lake, or the ocean. While there is some attenuation of these pollutants before entering the receiving waters, the quantity of human activity results in large enough quantities of pollutants to impair these receiving waters.

Stormwater runoff as a source of pollution 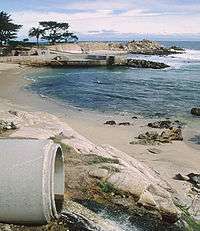 In addition to the pollutants carried in stormwater runoff, urban runoff is being recognized as a cause of pollution in its own right. In natural catchments (watersheds) surface runoff entering waterways is a relatively rare event, occurring only a few times each year and generally after larger storm events. Before development occurred most rainfall soaked into the ground and contributed to groundwater recharge or was recycled into the atmosphere by vegetation through evapotranspiration .

In some areas, especially along the U.S. coast, polluted runoff from roads and highways may be the largest source of water pollution. For example, about 75 percent of the toxic chemicals getting to Seattle, Washington's Puget Sound are carried by stormwater that runs off paved roads and driveways, rooftops, yards, and other developed land.[4]

Stormwater is a major cause of urban flooding. Urban flooding is the inundation of land or property in a built-up environment caused by stormwater overwhelming the capacity of drainage systems, such as storm sewers. Although triggered by single events such as flash flooding or snow melt, urban flooding is a condition, characterized by its repetitive, costly and systemic impacts on communities. In areas susceptible to urban flooding, backwater valves and other infrastructure may be installed to mitigate losses.

Where properties are built with basements, urban flooding is the primary cause of basement and sewer backups. Although the number of casualties from urban flooding is usually limited, the economic, social and environmental consequences can be considerable: in addition to direct damage to property and infrastructure (highways, utilities and services), chronically wet houses are linked to an increase in respiratory problems and other illnesses.[5]

Urban flooding has significant economic implications. In the U.S., industry experts estimate that wet basements can lower property values by 10 to 25 percent and are cited among the top reasons for not purchasing a home.[6] According to the Federal Emergency Management Agency almost 40 percent of small businesses never reopen their doors following a flooding disaster.[7] In the UK, urban flooding is estimated to cost £270 million a year (as of 2007) in England and Wales; 80,000 homes are at risk.[8]

A study of Cook County, Illinois, identified 177,000 property damage insurance claims made across 96 percent of the county’s ZIP codes over a five-year period from 2007 to 2011. This is the equivalent of one in six properties in the County making a claim. Average payouts per claim were $3,733 across all types of claims, with total claims amounting to $660 million over the five years examined.[9]

An example of Urban flooding control project is the Brays Bayou Greenway Framework.[10] The Brays Bayou Greenway Framework is federally funded improvement project. Brays Bayou starts from the Bayou's mouth at Buffalo Bayou and the Ship Channel in the east to the Barker Reservoir and George Bush Park in the west. In aim to identify a broad set of potential recreation and open space opportunities along the 35 miles of Brays Bayou, Brays Bayou and its tributaries provide drainage to a watershed of approximately 88,000 acres south of downtown Houston, Texas. Project Brays responses to the present flooding problems in Houston and creates a short-term solution by improving the bayou's drainage capacity, also considered a long-term solution for flooding preventing. 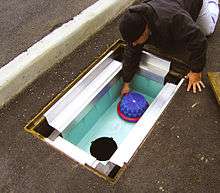 Managing the quantity and quality of stormwater is termed, "Stormwater Management."[11] The term Best Management Practice (BMP) or stormwater control measure (SCM)[12] is often used to refer to both structural or engineered control devices and systems (e.g. retention ponds) to treat or store polluted stormwater, as well as operational or procedural practices (e.g. street sweeping). Stormwater management includes both technical and institutional aspects, including:[13] 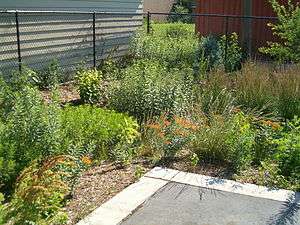 Integrated water management (IWM) of stormwater has the potential to address many of the issues affecting the health of waterways and water supply challenges facing the modern urban city.

Also known as low impact development (LID)[14] in the United States, or Water Sensitive Urban Design (WSUD)[15] in Australia, IWM has the potential to improve runoff quality, reduce the risk and impact of flooding and deliver an additional water resource to augment potable supply.

The development of the modern city often results in increased demands for water supply due to population growth, while at the same time altered runoff predicted by climate change has the potential to increase the volume of stormwater that can contribute to drainage and flooding problems. IWM offers several techniques including stormwater harvest (to reduce the amount of water that can cause flooding), infiltration (to restore the natural recharge of groundwater), biofiltration or bioretention (e.g., rain gardens) to store and treat runoff and release it at a controlled rate to reduce impact on streams and wetland treatments (to store and control runoff rates and provide habitat in urban areas).

There are many ways of achieving LID. The most popular is to incorporate land-based solutions to reduce stormwater runoff through the use of retention ponds, bioswales, infiltration trenches, sustainable pavements (such as permeable paving), and others noted above. LID can also be achieved by utilizing engineered, manufactured products to achieve similar, or potentially better, results as land-based systems (underground storage tanks, stormwater treatment systems, biofilters, etc.). The proper LID solution is one that balances the desired results (controlling runoff and pollution) with the associated costs (loss of usable land for land-based systems versus capital cost of manufactured solution). Green (vegetated) roofs are also another low cost solution.

IWM as a movement can be regarded as being in its infancy and brings together elements of drainage science, ecology and a realization that traditional drainage solutions transfer problems further downstream to the detriment of our environment and precious water resources. 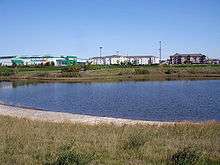 Retention basin for management of stormwater

In the United States, the Environmental Protection Agency (EPA) is charged with regulating stormwater pursuant to the Clean Water Act (CWA).[16] The goal of the CWA is to restore all "Waters of the United States" to their "fishable" and "swimmable" conditions. Point source discharges, which originate mostly from municipal wastewater (sewage) and industrial wastewater discharges, have been regulated since enactment of the CWA in 1972. Pollutant loadings from these sources are tightly controlled through the issuance of National Pollution Discharge Elimination System (NPDES) permits. However, despite these controls, thousands of water bodies in the U.S. remain classified as "impaired," meaning that they contain pollutants at levels higher than is considered safe by EPA for the intended beneficial uses of the water. Much of this impairment is due to polluted runoff.

To address the nationwide problem of stormwater pollution, Congress broadened the CWA definition of "point source" in 1987 to include industrial stormwater discharges and municipal separate storm sewer systems ("MS4"). These facilities were required to obtain NPDES permits.[17]

A silt fence, a type of sediment control, installed on a construction site

EPA has authorized 46 states to issue NPDES permits.[18] In addition to implementing the NPDES requirements, many states and local governments have enacted their own stormwater management laws and ordinances, and some have published stormwater treatment design manuals.[11][19] Some of these state and local requirements have expanded coverage beyond the federal requirements. For example, the State of Maryland requires erosion and sediment controls on construction sites of 5,000 sq ft (460 m2) or more.[20] It is not uncommon for state agencies to revise their requirements and impose them upon counties and cities; daily fines ranging as high as $25,000 can be imposed for failure to modify their local stormwater permitting for construction sites, for instance.

Agricultural runoff (except for concentrated animal feeding operations, or "CAFO") is classified as nonpoint source pollution under the CWA. It is not included in the CWA definition of "point source" and therefore not subject to NPDES permit requirements. The 1987 CWA amendments established a non-regulatory program at EPA for nonpoint source pollution management consisting of research and demonstration projects.[21] Related programs are conducted by the Natural Resources Conservation Service (NRCS) in the U.S. Department of Agriculture.

Education is a key component of stormwater management. A number of agencies and organizations have launched campaigns to teach the public about stormwater pollution, and how they can contribute to solving it. Thousands of local governments in the U.S. have developed education programs as required by their NPDES stormwater permits.[22]

One example of a local educational program is that of the West Michigan Environmental Action Council (WMEAC), which has coined the term Hydrofilth to describe stormwater pollution,[23] as part of its "15 to the River" campaign. (During a rain storm, it may take only 15 minutes for contaminated runoff in Grand Rapids, Michigan to reach the Grand River.)[24] Its outreach activities include a rain barrel distribution program and materials for homeowners on installing rain gardens.[25]

Other public education campaigns highlight the importance of green infrastructure in slowing down and treating stormwater runoff. DuPage County Stormwater Management launched the "Love Blue. Live Green." outreach campaign on social media sites to educate the public on green infrastructure and other best management practices for stormwater runoff.[26] Articles, websites, pictures, videos and other media are disseminated to the public through this campaign.

Since humans began living in concentrated village or urban settings, stormwater runoff has been an issue. During the Bronze Age, housing took a more concentrated form, and impervious surfaces emerged as a factor in the design of early human settlements. Some of the early incorporation of stormwater engineering is evidenced in Ancient Greece.[27]

A specific example of an early stormwater runoff system design is found in the archaeological recovery at Minoan Phaistos on Crete.[28]