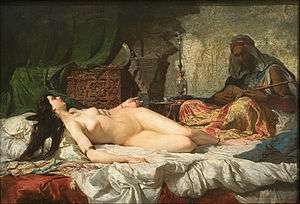 Marià Fortuny - The Odalisque
This article is about the women in the Ottoman Empire. For other uses, see Odalisque (disambiguation).

An odalisque (Turkish: Odalık) was a chambermaid or a female attendant in a Turkish seraglio, particularly the court ladies in the household of the Ottoman sultan.

The word "odalisque" is French in form and originates from the Turkish odalık, meaning "chambermaid", from oda, "chamber" or "room". It can also be transliterated odahlic, odalisk, and odaliq.

Joan DelPlato has described the term's shift in meaning from Turkish to English and French:

The English and French term odalisque (rarely odalique) derives from the Turkish 'oda', meaning "chamber"; thus an odalisque originally meant a chamber girl or attendant. In western usage, the term has come to refer specifically to the harem concubine. By the eighteenth century the term odalisque referred to the eroticized artistic genre in which a nominally eastern woman lies on her side on display for the spectator.[1]

Origin as the Turkish odalık 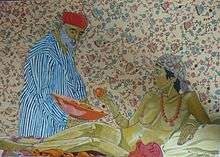 Odalisque with an orange by Angélique Bègue (2014)

An odalık was not a concubine of the harem, but a maid, even if it was possible that she could become one. An odalık was ranked at the bottom of the social stratification of a harem, serving not the man of the household, but rather, his concubines and wives as personal chambermaids. Odalık were usually slaves given as gifts to the sultan by wealthy Turkish men. Generally, an odalık was never seen by the sultan but instead remained under the direct supervision of his mother, the Valide Sultan.

If an odalık was of extraordinary beauty or had exceptional talents in dancing or singing, she would be trained as a possible concubine. If selected, an odalık trained as a court lady would serve the sultan sexually and only after such sexual contact would she change in status, becoming thenceforth one of the consorts of the sultan.

In contrast to European depictions of nude harem women, they more often wore androgynous robes resembling those worn by the male pages of the palace. The conditions of the Ottoman harem "resembled a monastery for young girls more than the bordello of European imagination."[2]

Later usage of the term "Odalisque" in the western culture 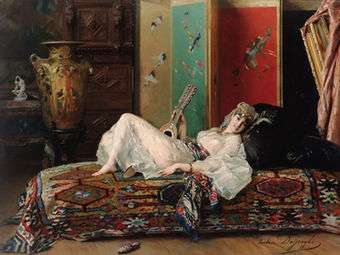 W. S. Gilbert refers to the "Grace of an odalisque on a divan" in Colonel Calverley's song "If You Want A Receipt For That Popular Mystery" from the Gilbert and Sullivan opera Patience.

In popular use, the word odalisque also may refer to a mistress, concubine or paramour of a wealthy man.

By the later 19th century, Turkish writers such as Melek Hanum used the word odalisque to refer to slave-concubines when writing in English:

If any lady possesses a pretty-looking slave, the fact soon gets known. The gentlemen who wish to buy an odalisque or a wife, make their offers. Many Turks, indeed, prefer to take a slave as a wife, as, in such case, there is no need to dread fathers, mothers, or brothers-in-law, and other undesirable relations.[3]

In 2011 the Law Society of British Columbia brought a discipline hearing against an unnamed lawyer for referring to another lawyer's client as living with an odalisque. The Law Society found the use of the word, though an extremely poor choice, did not rise to the level of professional misconduct.[4]