Oliver Hampton Smith (October 23, 1794 – March 19, 1859) was a United States Representative and Senator from Indiana. Born on Smith's Island, near Trenton, New Jersey, (is also believed to have been born at the Smith Family Farmstead in Upper Makefield Township, Bucks County, Pennsylvania[1]) he attended the common schools and moved west, eventually settling in Lawrenceburg, Indiana in 1818. He studied law and was admitted to the bar in 1820, commencing practice in Connersville. From 1822 to 1824 he was a member of the Indiana House of Representatives and was prosecuting attorney for the third judicial district, 1824-1825. 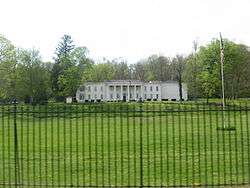 Smith was elected to the Twentieth Congress (March 4, 1827–March 3, 1829) and was an unsuccessful candidate for reelection in 1828; he was then elected as a Whig to the U.S. Senate and served from March 4, 1837, to March 3, 1843. While in the Senate, he was chairman of the Committee on Engrossed Bills (Twenty-sixth Congress) and a member of the Committee on Public Lands (Twenty-seventh Congress). He was an unsuccessful candidate for reelection and moved to Indianapolis where he resumed the practice of law. He declined to be a candidate for Governor of Indiana in 1845 and engaged in the railroad business in Indianapolis. He died in that city in 1859; interment was in Crown Hill Cemetery.