George Earle Chamberlain Sr. (January 1, 1854 – July 9, 1928) was an American attorney, politician, and public official in Oregon. A native of Mississippi and member of the Democratic Party, Chamberlain's political achievements included appointment followed by election as the first Attorney General of Oregon, a stint as the state's 11th Governor, and two terms in the United States Senate in Washington, DC.

George Earle Chamberlain was born in Natchez, Mississippi, on January 1, 1854. The Chamberlain family were early immigrants to North America from England, helping to pioneer in the state of Massachusetts.[1] His father, Dr. Charles Thomson Chamberlain, was born in Delaware and attended medical school in Philadelphia before moving to the small southern town of Natchez in 1837, attracted by the prospects offered there for a newly coined medical practitioner.[1]

George Earle Chamberlain attended public schools in Natchez, completing his secondary education in 1870 at the age of 16.[2] Following graduation he first worked two years as a clerk in a general merchandise store before leaving for Washington and Lee University in 1872.[2] Chamberlain successfully complete the course of work there, graduating with dual degrees of Bachelor of Arts and Bachelor of Law in July 1876,[2] gaining membership in Phi Kappa Psi Fraternity in the process.

Following graduation from Washington and Lee, Chamberlain briefly returned home to Natchez but decided that professional prospects in the post-bellum South were marginal at best and he departed for a new life in Oregon, arriving on December 6, 1876.[2]

Chamberlain's first job in the west was a brief and poor-paying stint as the teacher of a country school in Linn County, Oregon.[2] Late in 1877 he was appointed deputy clerk of Linn County, remaining in that position until the summer of 1879.[2] In the interim he passed the Oregon state bar, enabling him to practice law in the state.

In 1878 he served in the Linn County Rifles, a volunteer militia formed to fight against belligerents from the Bannock, Shoshone, and Paiute peoples in the so-called Bannock War.[3] 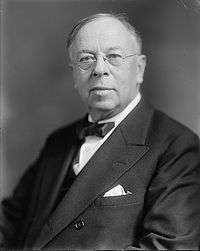 Chamberlain as he appeared in his later years.

A member of the Democratic Party, Chamberlain ran for the Oregon House of Representatives in November 1880, winning election to a two-year term.

In 1884 Chamberlain was made district attorney for Oregon's 3rd judicial district.[2] His skill in that position gained the notice of Democratic Governor Sylvester Pennoyer and when in 1891 the state legislature established the new position of Oregon Attorney General, Chamberlain was appointed in May as the first to hold that position.[2] He stood for election to the position in the fall, winning at the polls despite being the candidate of the minority party in the state.[2] Chamberlain would remain Oregon's Attorney General until January 1895, following the expiration of his term. He would be the only Democrat to hold that position for 58 years, until Robert Y. Thornton was elected in 1952.

After leaving the Oregon Attorney General's position, Chamberlain went into the banking business, taking positions with the First National Bank and later the Linn County National Bank in his new hometown of Albany.[2]

Chamberlain next moved north to Portland and in 1900 stood for election as the district attorney for Multnomah County.[2] He won a more than 1,000 votes, despite the county's 4,000 person Republican majority.[2] This again placed Chamberlain in the public eye for a run at statewide office.

In 1902, was nominated by the Democratic Party of Oregon for Governor by acclamation at the party's nominating convention.[2] Chamberlain was elected Governor of Oregon in a tight election by just 256 votes, this in a state which delivered 15,000 more votes to the Republicans in the concurrent congressional elections.[2] 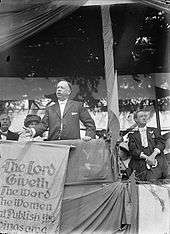 Chamberlain was reelected in 1906, resigning his term when elected to the Senate. 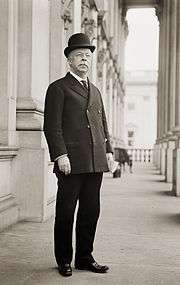 Chamberlain was elected to two terms as a United State Senator from Oregon.

The Chamberlain Military Preparedness Bill of 1918, which he wrote, bears his name.

He was a member of the United States Shipping Board from 1921 to 1923 and engaged in the practice of law in Washington, D.C.

Chamberlain died there on July 9, 1928, and interment was in Arlington National Cemetery.

During his life Chamberlain was a member of the Independent Order of Odd Fellows, Knights of Pythias, and was a 32nd degree Mason in Portland.[2] He was also a member of the Commercial Club of Portland, the Multnomah Athletic Club, the Oregon Historical Society, and was a life member of the Benevolent and Protective Order of Elks.[4]