Robert John Walker (July 19, 1801 – November 11, 1869) was an American economist and statesman. As a member of the Democratic Party, he served as a member of the U.S. Senate from Mississippi from 1835 until 1845, as Secretary of the Treasury from 1845 to 1849 during the administration of President James K. Polk, and briefly as Territorial Governor of Kansas in 1857.

As a senator, Walker vigorously supported the annexation of Texas. As Secretary of the Treasury, he held responsibility for the management of funds relating to the Mexican-American War, and in this capacity was accused of misappropriation. He resigned shortly following his appointment by President James Buchanan as Governor of Kansas in 1857 due to his opposition to the administration-sponsored pro-slavery Lecompton Constitution. After his retirement from politics, Walker supported the United States during the American Civil War and practiced law.

Born in Northumberland, Pennsylvania, he was the son of a judge. He lived in Bellefonte, Pennsylvania from 1806 to 1814, where his father was presiding judge of the judicial district. Walker was educated at the Bellefonte Academy.[1] He graduated in 1819 at the top of his class at the University of Pennsylvania where he was a member of the Philomathean Society, and was admitted to the bar in Pittsburgh in 1821. He practiced law in Pittsburgh from 1822 until 1826 when he moved to Mississippi. There he joined his brother, Duncan Walker, in a lucrative law practice. Walker became a speculator in cotton, land and slaves. (In 1838 he freed his own slaves due to immense pressure from Congress.)

He became politically prominent during the Nullification Crisis, and from 1835 to 1845 he sat in the United States Senate as a Unionist Democrat. Being an ardent expansionist, he voted for the recognition of the Republic of Texas in 1837 and for the joint annexation resolution of 1845, and advocated the nomination and election of James K. Polk in 1844. He favored the award of public lands to new states; endorsed a low tariff; opposed distribution of the federal surplus funds for fear of creating an excuse to raise tariff rates; and, significantly, supported the independent Treasury system idea. He also opposed the Bank of the United States.

As a Mississippi senator, Walker was a passionate defender of slavery, both for economic benefits, and because he believed slaves/ African Americans would fall into turpitude or insanity without firm masters. He claimed that independent Texas had to be annexed to prevent it from falling into the hands of Great Britain, which would use it to spread subversion throughout the South. He warned northerners that if Britain succeeded in undermining slavery, the freedmen would go north, where "the poor-house and the jail, the asylums of the deaf and dumb, the blind, the idiot and insane, would be filled to overflowing."[2] 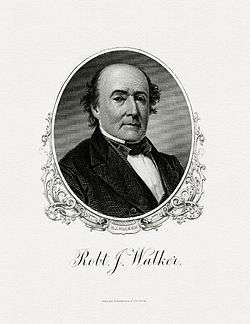 Bureau of Engraving and Printing portrait of Walker as Secretary of the Treasury.

He was U.S. Secretary of the Treasury throughout the Polk administration, from March 8, 1845 until March 5, 1849, and was an influential member of the President's Cabinet. Vice President George M. Dallas convinced Polk to appoint Walker to the position.

As Treasury Secretary, Walker financed the Mexican-American War and drafted the 1849 bill to establish the United States Department of the Interior.[3] One example of financing the Mexican-American war can be seen in correspondence; he wrote to Major General William Orlando Butler, "February 23, 1848. Sir, Upon the ratification of a treaty of peace by the Republic of Mexico in conformity with the provisions of the act of the congress of the United States of America approved March 3, 1847 stated 'an act making further appropriation to bring the existing war with Mexico to a speedy and honorable conclusion' you are authorized to draw on this department for any sum not exceeding three millions of dollars to be paid in pursuance of the promotion of said act."[4] He also supported the independent Treasury system, pushed for a tariff for revenue, and established a warehousing system for handling imports that has had lasting influence. 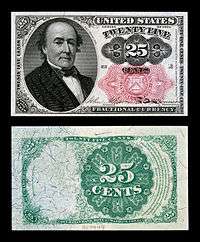 Walker was involved in a prominent Treasury report of December 3, 1845. It is regarded as the most powerful attack upon the protection system that has ever been made in an American state paper. The Walker Tariff of 1846 was based upon the principles of this paper and was in fact largely the secretary's own work.

It was during the Mexican-American War that the US treasury seemed to be running out of money. An astonishingly large amount of funds (about $6 million) had been withdrawn from the army's quartermaster and commissary departments. It turned out that $1.1 million had been deposited in the bank of Corcoran and Riggs, which had turned around and invested the funds in stock securities. Polk, who had run on an anti-bank platform, wrote in his diary that it was the most troubling moment of his presidency. Confronting Walker yielded only casual, vague replies. Polk ordered an investigation, but Walker still couldn't give Polk the answers he needed. Eventually Walker told Polk that the $600,000 remaining in the bankers' hands would be distributed to the army and Polk lost interest in the matter. It was never proved whether any chicanery had been going on, but before Walker was appointed, Polk's mentor Andrew Jackson had warned him "that Walker wasn't a man to be trusted with the nation's cash."[5]

After leaving Treasury in 1849, Walker became a lawyer in Washington, DC, devoted himself to business and land speculation and became involved in mining interests.

In 1853, President Franklin Pierce offered Walker the post of United States Minister to China. However, Walker declined the office.[6]

Walker at first opposed the Compromise of 1850, but was won over later by the arguments of Illinois Senator Stephen A. Douglas. He was appointed governor of Kansas Territory on May 27, 1857 by President James Buchanan, but resigned in December because of his opposition to the Lecompton Constitution.[7] In a resignation letter to Secretary of State Lewis Cass dated December 15, 1857, he cited clear voting fraud and improper political pressure from the Administration. He did not, however, break with his party immediately, and favored the so-called English Bill. It was partly due to his influence that a sufficient number of anti-Lecompton Democrats were induced to vote for that measure to secure its passage.

He supported the Union cause during the American Civil War and in 1863 and 1864, as financial agent of the United States, did much to create confidence in Europe in the financial resources of the United States. During this time Walker was instrumental in securing a loan of $250,000,000 from the German Confederation.

He practiced law in Washington, D.C., from 1864 until his death there in 1869. Both during and after the Civil War he was a contributor to the Continental Monthly, which for a short time he also, with James R. Gilmore, conducted.

Walker was the father-in-law of Benjamin H. Brewster, Attorney General under Chester A. Arthur.

Initially, Walker County, Texas, was named in his honor. However, due to his support of the Union during the Civil War, the Texas Legislature withdrew the honor and honored Samuel Walker (no relation), a Texas Ranger, instead.

The survey ship Robert J. Walker, which served in the United States Coast Survey from 1848 to 1860, was named for Walker.