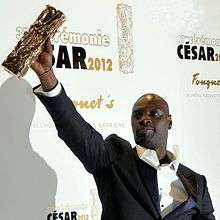 The fourth of eight children,[2] Omar Sy was born in Trappes in the Yvelines department, France.[1] His parents are both immigrants from West Africa.[2] His Mauritanian mother worked as a house-cleaner, and his Senegalese father worked in a factory.[2] He has Fulani origins.[3] He was raised in low-income suburban housing projects.[2][3]

He started his career after high school in 1996[3] with Radio Nova as a comedian where he met comedy partner Fred Testot.[1] Afterwards, he appeared in the TV show Le Cinéma de Jamel on Canal+, with Jamel Debbouze. He then created a TV show called Le Visiophon.[1] This was followed by various TV and stage shows such as Je ne fais pas mon âge, Service après-vente des émissions, Omar et Fred: le spectacle. In 2005, Service après-vente des émissions was adapted into short sketches of 2 or 3 minutes on Canal+. (In 2012, Canal+ announced that the programme had been dropped from its schedule.)

He appeared in the television game show Fort Boyard in 2006.

Omar then went to Los Angeles, where he lent his voice to Zip in the French version of the Tomb Raider Legend video game. He previously had also voiced a sheep in Disney's Brother Bear.[1]

In 2008, he appeared in "Bienvenue chez les Bylkas", a video clip by Sinik. In 2009, he voiced some of the characters of Logorama with his partner Fred Testot.

In 2011, he starred in The Intouchables, playing a streetwise young man who becomes the personal care assistant to a wealthy quadriplegic (played by François Cluzet). This film enjoyed tremendous popular success, with more than 19 million tickets sold. It topped the French box office in 2011 and became the best selling French film of all time at the French box office. As a result, Omar Sy was voted third favourite French personality behind Yannick Noah and Zinédine Zidane. The role earned him the 2012 Globe de Cristal for Best Actor. He also received a nomination for a Satellite Award for Best Actor.[4] He and co-star François Cluzet jointly were bestowed the Best Actor Award at the Tokyo International Film Festival. Additionally, he won the César Award for Best Actor in 2012 for the same film.

On 30 December 2012, Omar Sy was voted favourite personality in France, based on a poll run by Le Journal du Dimanche, ahead of fellow actor Gad Elmaleh.

In 2014, Sy appeared in X-Men: Days of Future Past, in which he played the character Bishop. He also stars in Samba, directed by Olivier Nakache and Éric Toledano. He co-starred in the fourth film of the Jurassic Park saga, Jurassic World,[1] which was released in June 2015.[5]

On 5 July 2007, he married Hélène, the mother of his five children,[3][6] in Tremblay-sur-Mauldre. They were together ten years before marrying.[6] The family resides in a house in Yvelines Montfort-l'Amaury.[6]