This article is about boxing. For other uses, see One-two. 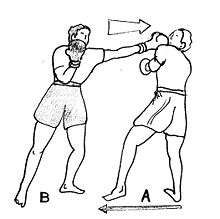 A drawing of a jab.

In boxing, the "one-two combo" (also called "the old one-two") is a nickname of a jab and cross combo. It is so named because, in boxing parlance, the jab is often referred to as a "1" and the cross as a "2".

Boxers usually learn this combination before any other.

The jab is designed to get the fighter in range while effectively blinding the opponent and hiding the cross, which is a longer punch that will be slipped if thrown on its own. Generally, the jab is thrown with 60% power while stepping forward into range, and the cross follows at full power as the lead hand is retracted back to the guard. 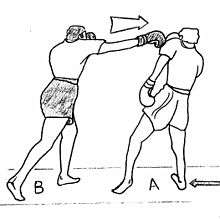 A drawing of a cross.

Many boxers use this combination of punches to weaken their opponents during the beginning of a fight before any other combinations.