Not to be confused with Marathon swimming.

The beginning of the modern age of open water swimming is sometimes taken to be May 3, 1810, when Lord Byron swam several miles to cross the Hellespont (now known as the Dardanelles) from Europe to Asia.[1]

In the first edition of the modern Olympic Games in Athens in 1896, the swimming competition was held in open water. In 2000, the Olympic Games first included a triathlon with a 1500 m swim leg, and in 2008, a 10 km open water swim. The FINA World Aquatics Championships features open water swimming events since 1992. The FINA World Open Water Swimming Championships was held from 2000 to 2010. Since 2007, the FINA 10 km Marathon Swimming World Cup is held in several events around the world.

The activity has grown in popularity in recent years with the publication of bestselling books on "wild swimming" by authors such as Kate Rew and Daniel Start, and Waterlog by Roger Deakin.[2]

Events such as the Midmar Mile in South Africa (attributed to Wayne Ridden), Great Swim in the UK (attributed to Great Swim with idea by Colin Hill), have helped create and grow interest in participation of the sport. 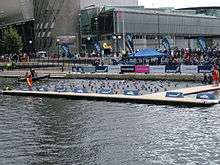 Acclimatisation to the 14.5C water at Salford Quays in September 2010 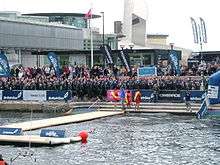 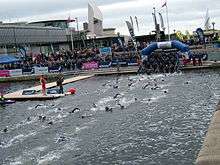 And walk into the water:the start of the one mile course.

Though most open water races do not require a specific stroke, most competitors employ the front crawl also known as freestyle. The efficiency of this stroke was demonstrated by Gertrude Ederle, who, as the first woman to swim the English Channel, employed it to demolish the existing world record by more than 2 hours.

When covering large distances, swimmers may head off course due to current, waves, wind, and poor visibility. Typically, buoys are stationed periodically across a large expanse to provide guidance. However, buoys are often invisible due to interference from choppy water and reduced visibility through goggles. Swimmers are encouraged to 'triangulate' by looking for two aligned, easily visible objects on land that are directly behind the destination (such as the end of a pier as it lines up with a hilltop), and to make sure they continue to appear aligned during the race.

Drafting, which is prohibited by some race regulations, is the technique of following another swimmer so closely that water resistance is reduced. When swimming closely alongside or behind a swimmer in the lead swimmer's wake, resistance is reduced and the amount of effort to swim at the same speed is correspondingly reduced. In calmer conditions, or when facing surface chop, swimmers can also significantly benefit from swimming immediately behind or closely alongside a swimmer of comparable or faster speed. Not all race organizers permit drafting, and swimmers can run the risk of disqualification if they are caught. 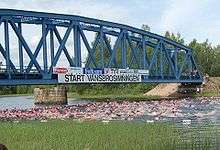 In some competitions, a floating bag is used for extra visibility

The equipment allowed in a race depends on the sanctioning body and/or the race organizers. For example, races may have divisions for wetsuits and/or relays; may require escort boats / kayakers / paddleboards; and may require specifically colored swim caps. Some swimmers tend to keep it simple, using a basic swimsuit, goggles, and swim cap. Many records are based on that attire, which is known as 'channel attire' because it is stipulated in the rules for English Channel crossings and the rules for other long swims.

Various types of wetsuits of varying thicknesses are used in open water swimming. Some employ high-tech materials and workmanship, others are of basic materials found in surfing and diving wetsuits. Some designs cover the torso, arms and legs, while other designs leave the arms and shoulders exposed.

When a person floats motionless in the water, their legs tend to sink. When a person swims freestyle, the legs rise toward surface because water passing underneath the body pushes the legs up, similar to how the wind can lift a kite into the air. In addition, a proper kicking technique will bring the legs all the way to the surface, creating a more streamlined profile for the arms to pull through the water. Both of these mechanisms of becoming horizontal require a small amount of energy from the swimmer. When a person wearing a thick wetsuit floats motionless in the water, their legs tend to float on the surface. Theoretically, this obviates the small energy expenditure mentioned above, although an additional small amount of energy is required to continually flex the wetsuit during swimming motions.

Open water swimming is an Olympic-sanctioned discipline. It has been included in the Olympic Games since 2008 and the FINA World Aquatics Championships since 1991.