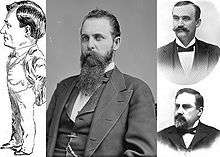 In 1870, the United States government granted the Oregon and California Railroad 3 million acres (12,000 km2) of land to build a line from Portland south to California. The land, which was granted in a checkerboard pattern along both sides of the railroad's right of way, was then sold to settlers in parcels of 160 acres (0.6 km2) at the extremely low price of $2.50 an acre to encourage people to settle along the line, thus fostering development.[1]

Since much of the land was unfit for development, it did not attract many settlers. However, the land was very rich in timber, which meant that timber companies would pay much more than $2.50 an acre.[2] So to circumvent the requirements of the land grant, Edward Harriman, president of the Southern Pacific Railroad—which then owned the O&C—hired former surveyor Stephen A. Douglas Puter to round up people from saloons in Portland's waterfront district, escort them to the land office, have them register for an O&C parcel as a settler, and then transfer it to Puter's men. The accumulated parcels were then sold in large blocks to the highest bidder for timber harvest.[3][4]

Harriman eventually had a dispute with Puter and fired him. Then when a lumber company bookkeeper exposed the scheme to an Oregonian reporter, Puter turned on his former boss, testifying against him, and writing a scathing expose, Looters of the Public Domain, about the scheme.[3]

These looters of the public domain—working with crooked federal and state officials—through rascality and fraud, gained title to thousands of acres of valuable, publicly-owned timber lands, and at minimum prices.

Initially, more than 1,000 indictments were issued in the case. U.S. District Attorney Francis J. Heney narrowed down the list to the 35 most egregious offenders, including U.S. Senator John H. Mitchell and U.S. Representatives John N. Williamson and Binger Hermann.[3]

Heney charged that Mitchell had illegally used his position to aid a client in the acquisition of patents to fraudulent land claims. Mitchell's law partner and personal secretary both testified against him, and on July 3, 1905, the jury found him guilty. He was sentenced to six months in prison and a $1,000 fine. Mitchell appealed, but before the appeal could be heard, he died from complications associated with a tooth extraction.[6]

Mitchell was convicted under Rev. Stat. §1782 (enacted 1864) which prohibited Senators and other officials from engaging in compensated representation in matters in which the United States was interested.[7] The year before, in an unrelated case under the same statute, Senator Joseph R. Burton had become the first U.S. Senator convicted of a crime.[8]

Williamson's trial also resulted in conviction for subornation of perjury in 1905. The prosecution argued that the three defendants had attempted to illegally obtain land claims under the Timber and Stone Act. Williamson appealed his case to the U.S. Supreme Court, which overturned the verdict in 1908 because of apparent jury tampering and witness intimidation.[9]

In 1907, Hermann was found not guilty of destroying public documents. His second trial for collusion with the actual land fraud was postponed until 1910, and ended in a hung jury and Heney declined to refile charges.[10]

Heney also prosecuted John Hicklin Hall, who was the U.S. Attorney originally charged with investigating the case, but who had been fired in 1905 by President Theodore Roosevelt for not aggressively pursuing the investigation. Heney charged Hall with failure to prosecute fraudulent land companies and for using knowledge of the fraudulent activities for his own political advantage, and the jury convicted Hall in 1908.[11] Hall was later pardoned by President William Howard Taft.[12]